Businesses Strike in Israel Over Gaza

Thousands of businesses across the country join strike in protest over the Israeli offensive on Gaza. 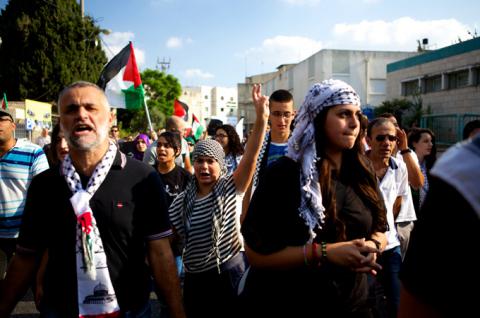 Nazareth, Israel - The main commercial street in this majority-Palestinian city was shuttered on Monday, as residents joined a general strike and staged protests against the two-week-old Israeli offensive in Gaza.

Thousands of businesses across Israel and the West Bank joined the strike, organised after a day of intense Israeli shelling in Gaza killed more than 100 people.

Several thousand demonstrators held posters with the photos of children killed during the offensive, and chanted slogans calling the army "terrorists" and "war criminals".

Protesters clashed briefly with police after the main rally, and at least a dozen people were arrested.There were scattered protests against the war last week, including a rally in Haifa at which several Knesset members were detained or beaten, but Monday's strike was the first large coordinated movement."The action itself is what is important, to show solidarity and to protest against the crimes," said Samir Haddad, a resident of Nazareth.

"We need to show that we are one people."

The call for a general strike drew an angry response from Israeli Foreign Minister Avigdor Lieberman, who urged his supporters to boycott businesses that joined.

"I call on everyone not to buy anything more from the shops and businesses in the Arab community who are participating in today's general strike," he wrote on Facebook.

Anger has been mounting for months among Israel's Palestinian citizens, who make up about 20 percent of the population.

The government has pursued a number of initiatives seen as discriminatory, including a bill that could effectively drive Palestinian parties out of the Knesset, and a plan to draft more Christians into army service.

The tensions reached a peak earlier this month, when a 16-year-old boy from East Jerusalem was kidnapped and brutally murdered, an apparent revenge attack for the murder of three teenage Jewish settlers in June.

Residents of his neighbourhood fought with police for three days, and the clashes spread to Palestinian towns in central and northern Israel.

Nearly 700 people were arrested after those protests, rights groups say, including 224 from East Jerusalem.

The majority have been released, but dozens face charges for throwing stones and blocking roads, the latter of which carries up to a 15-year jail term.

"Some of them were charged, or at least investigated, just because of using Facebook," said Salah Mohsen, from Adalah, a local rights group.

"The leaders of this movement who called [online] for demonstrations, we know a few of them who were investigated and detained."