Bacterial Antivirus System Repurposed to Attack HIV Where It's Hiding

Cuts up copies of HIV that have inserted themselves into the genome. 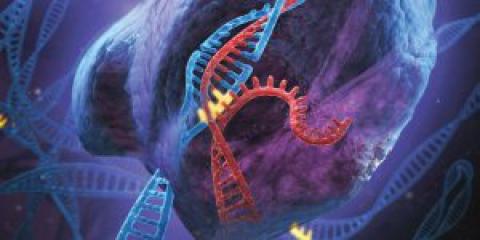 As part of its normal life cycle, HIV inserts a copy of itself into the genome of every cell it infects. Most of these copies go on to cause an active infection, pumping out new copies of the virus. A few of them, however, go quiet and can persist even during aggressive antiviral treatments. These infected cells act as a reservoir for the virus, reestablishing an active infection if antiviral therapies are ever stopped. Eliminating this viral reservoir has proven extremely difficult.

Now, researchers are reporting on some of the first tests of a technique that targets the copies of the virus that are lurking in cells with a quiescent infection. Using a system that bacteria utilize to disable viruses, they've shown that it's possible to precisely edit out key HIV DNA sequences, essentially inactivating any copies of the virus. And if placed in cells prior to exposure to HIV, the same system effectively blocks infection.

Bacteria don't have an immune system, but that doesn't mean they have no defenses against viruses. When infected, the bacteria can make special RNAs that match the DNA sequences of the virus. These RNAs then guide a protein called Cas9 to the viral DNA, which the protein then cuts. The cut inactivates the virus, protecting the bacteria. The whole system (called CRISPR/Cas) is incredibly flexible; given the right RNA, it can be turned loose on pretty much any DNA sequence. Researchers have shown that it can be used to cut the DNA of living human cells, effectively editing their contents.

That gave a team of biologists an idea. If CRISPR/Cas worked on the DNA of the human genome and HIV inserts itself into said DNA, there's no reason you couldn't target those copies.

So the researchers designed a targeting RNA that would recognize part of the virus that's essential for infection (called an LTR, it controls insertion into the genome and expression of viral genes). They packaged up the genes for that RNA and the Cas9 DNA-cutting protein into a single vector and then inserted the vector into cells that were infected with HIV. As expected, the system cut any copies of HIV that were present in the genome. The cell then typically repaired the DNA by deleting a few nearby bases and relinking the two ends. As a result, key parts of the virus were deleted. The researchers also tested the use of two RNAs that target neighboring sequences and showed that these led to the deletion of all the DNA in between them.

This method was highly efficient, but there were always a few cells left over that seemed to have intact viruses. The researchers don't quite understand why, but it's a safe bet that they're looking into it.

As a further test, the researchers inserted their vector (carrying genes for Cas9 and the targeting RNAs) into the genome of some immune cells. They then attempted to infect those cells with HIV. The vector effectively blocked the establishment of an HIV infection, keeping the cells virus-free; the researchers call these cells "immunized."

It's a promising idea for a potential future therapy, but there are still some roadblocks that need to be dealt with. The first is a lack of complete HIV inactivation—as we mentioned, having any cells left in an HIV-containing reservoir places the patient at risk of having the virus reestablish itself. The second is efficiently getting the vector that contains the CRISPR/Cas system into infected cells. It's rather easy to do in a culture dish, but it's another thing entirely to do it efficiently in the human body. The researchers have their work cut out for them if they want to push this method toward clinical trials.

But even if they don't, using gene editing to block HIV is already in clinical trials. A different technology that makes cuts in DNA is being used to target the gene that encodes one of the proteins that HIV uses to enter cells. We already know that people who lack this gene don't progress to AIDS when infected with HIV, so this approach may not have to work with full efficiency in order to create a population of healthy immune cells in infected patients.