Even though the country’s black market for U.S. dollars has stabilized, the government will need to bring inflation down in order to maintain a stable exchange rate. 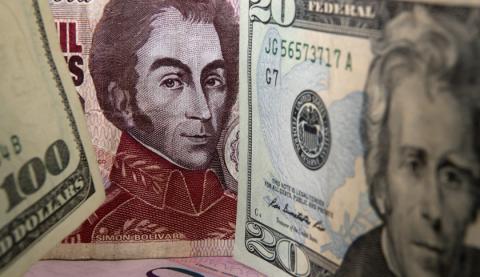 Most people think that the Venezuelan economy is a basket case on the verge of collapse, and that has been a widespread belief for most of the last decade. But the South American nation has only run into serious trouble in the past two years. Starting in 2004, after the government wrested control from its political opposition over the all-important oil industry the economy performed quite well through 2012. It grew at an annual rate of 4.8%, and the poverty rate fell by half.

During the past two years, however, a number of problems worsened. Inflation has hit annual rates of more than 60%, and the country has faced an increasing shortage of essential consumer goods like milk and toilet paper. The black market price of the dollar also soared.

Earlier this month, the government announced that it would try to resolve these imbalances by creating a single, unified exchange rate system. Venezuela currently has four different exchange rates. Most dollars are bought from the government at the official rate of 6.3 bolivares fuertes per U.S. Dollar. These are intended for essential goods, such as food and medicine. Some other importers can buy dollars from the government at a rate of about 11 bolivares per dollar on a limited exchange called SICAD 1. There is also SICAD 2, which was introduced in March and involves private sellers, at a rate of 50 Bf. per dollar. Finally, there is the black market, which is unregulated, where dollars currently sell for about 79 Bf. per dollar.

Will the new system help? It’s likely, given that a lot of the current problems do seem to be connected to the exchange rate system. The vast majority of the rise in inflation over the past two years, for example, has been in food that is mostly imported. Shortages of these foods and other imported goods have been mostly caused by shortages of dollars. But why does a country with $90 billion of annual oil revenue have a shortage of dollars? One reason is the current exchange rate system: When the exchange rate is fixed at a rate where dollars are too cheap (i.e. the domestic currency is overvalued), there is an incentive for people and businesses to bet against the domestic currency and put their money in dollars. Then they are much richer in domestic currency when the next devaluation occurs.

As this happens repeatedly, people begin to lose confidence in the domestic currency and the demand for dollars grows. If dollars are scarce, it pushes the black market price up, and this adds to inflation as import prices rise. The increased inflation makes the problem worse, as more people want to hold dollars. In extreme cases this can cause an “inflation-depreciation” or “inflation-devaluation” spiral, where the two movements (in inflation and the exchange rate) feed off each other.

But the system of fixed, overvalued exchange rates still contributes to shortages. Once the black market differential is big enough, it also increases the incentive for corruption; unlike selling cocaine, you don’t even need risk to leaving this world in a hail of bullets if you can get access to official dollars at 6.3 Bf and sell them for 72 on the black market.

According to the Bank of America’s March report, Venezuela has about $50 billion in foreign exchange reserves. (Although most of the central bank’s reserves are in gold, these can be easily sold – currently at a sizeable profit relative to their purchase price.) Imports have been shrinking over most of the past year. All of this should give the government a comfortable margin of foreign exchange with which to manage the transition.

Mark Weisbrot is co-director of the Center for Economic and Policy Research, in Washington, D.C. He is also President of Just Foreign Policy.