The UN should mandate an end to the siege of Gaza as a first step towards a settlement. 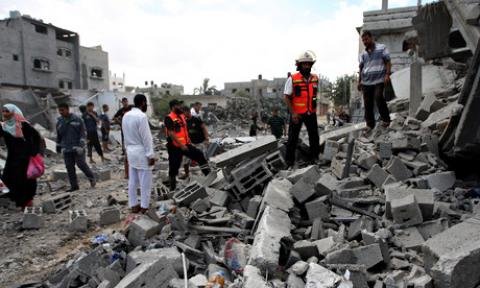 `There is no humane or legal justification for how the Israeli Defence Force is conducting this war, pulverising with bombs, missiles and artillery large parts of Gaza, including thousands of homes, schools and hospitals.', UPI/Landov/Barcroft Media // The Guardian

Israelis and Palestinians are still burying loved ones killed during Gaza’s third war in six years. Since 8 July, more than 1,800 Palestinian and 65 Israeli lives have been sacrificed. Many in the world are heart-broken in the powerless certainty that and despite the latest ceasefire, it seems that more could die yet; that more are being killed every hour.This tragedy results from the deliberate obstruction of a promising move towards peace, when a reconciliation agreement among the Palestinian factions was announced in April.

This was a major concession by Hamas, opening Gaza to joint control under a consensus government that did not include any Hamas members. The new government also pledged to adopt the three basic principles demanded by members of the International Quartet (UN, US, Europe, Russia): non-violence, recognition of Israel, and adherence to past agreements. Tragically, Israel rejected this opportunity for peace and has until now succeeded in preventing the new government’s deployment in Gaza.

Two factors are necessary to make the unity effort possible: at least a partial lifting of the seven-year sanctions and blockade that isolate the 1.8 million people in Gaza; and an opportunity for public sector workers on the Hamas payroll to be paid. These requirements for a human standard of life continue to be denied. Instead, Qatar’s offer to provide funds for the payment of employees was blocked by Israel and access to and from Gaza has been further tightened by Egypt and Israel.

There is no humane or legal justification for how the Israeli Defence Force is conducting this war, pulverising with bombs, missiles and artillery large parts of Gaza, including thousands of homes, schools and hospitals, displacing families and killing Palestinian non-combatants. Much of Gaza has lost its access to water and electricity completely. This is a humanitarian catastrophe.

There is never an excuse for deliberate attacks on civilians in conflict. These are war crimes. This is true for both sides. Hamas’s indiscriminate targeting of Israeli civilians is equally unacceptable. However, two Israeli civilians and a foreign worker were killed by Palestinian fire as opposed to an overwhelming majority of civilians among the Palestinians killed more than 400 of whom were children. The legal need for international judicial proceedings should be taken seriously, to investigate and end these violations of international law.

The UN Security Council should vote a resolution recognising the inhumane conditions in Gaza and mandate an end to the siege. The resolution could also acknowledge the need for international monitors who can report on movements to and from Gaza, as well as ceasefire violations. It should then enshrine strict measures to prevent the smuggling of weapons into Gaza. Members of the Elders, a group of independent leaders working together for peace and human rights, hope that these will continue and reach fruition.

At the Palestinians’ request, the Swiss government is considering whether to convene an international conference of the Geneva Conventions’ signatory states. This could pressure Israel and Hamas into observing their duty to protect civilian populations under international law. We sincerely hope all states – especially those in the west, with the greatest power – attend and live up to their obligations to uphold the Fourth Geneva Convention governing the treatment of occupied territory.

Unity Between Fatah and Hamas is stronger than for many years. As Elders, we believe this is one of the most encouraging developments of recent years and welcome it warmly. This presents an opportunity for the Palestinian Authority to reassume control over Gaza – an essential first step towards Israel and Egypt’s lifting of the blockade.

The Palestinian Authority cannot manage that task on its own. It will need the prompt return of the EU Border Assistance Mission to cover not just Rafah but all Gaza crossings. Egypt and Israel would, in turn, cooperate with international monitors backed by a UN Security Council mandate to protect civilian populations.

The initial goal should be the full restoration of free movement of people and goods to and from Gaza through Israel, Egypt and the sea. And the US and EU should recognise that Hamas is not just a military force but also a political one.

It cannot be wished away, nor will it cooperate in its own demise. Only by recognising its legitimacy as a political actor – one that represents a substantial portion of the Palestinian people – can the west begin to provide the right incentives for Hamas to lay down its weapons. Ever since the internationally monitored 2006 elections that brought Hamas to power in Palestine, the west’s approach has manifestly contributed to the opposite result. Ultimately, however, lasting peace depends on the creation of a Palestinian state next to Israel.

Leaders in Israel, Palestine and the world’s major powers should believe that these policy changes are within their reach and would move Israelis and Palestinians closer to a day when the skies over the Holy Land can forever fall silent.

[Jimmy Carter is a former US president. Mary Robinson is a former president of Ireland. Both are members of The Elders, a group of independent leaders working together for peace and human rights.]