Rosetta Comet Rendezvous is a Triumph for the European Space Agency

Rosetta has arrived at Comet 67P/Churyumov-Gerasimenko. One of the most audacious space missions in decades, it is designed to reveal clues to the origins of the solar system, our home planet and life itself. 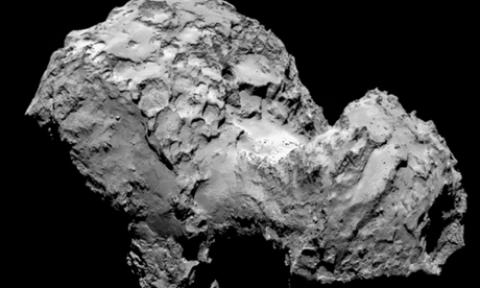 This morning, a thruster burn brought Rosetta into “orbit” around its target comet, signalling the start of its main science phase. The spacecraft will now track comet 67P/Churyumov-Gerasimenko for a year, following it through its closest approach to the sun to monitor how the extra heating affects the icy surface.

Nothing about this mission is ordinary, and these are no ordinary orbits. The weirdly shaped comet, which some have likened to the shape of a rubber duck, does not produce enough gravity to fully hold the spacecraft. Instead, the flight team will “drive” the spacecraft in triangular-shaped orbits, gradually lowering the altitude from today’s 100km to around 30km.

From a PR point of view, today’s triumphant rendezvous stands in stark contrast to the last time the European Space Agency mounted a comet mission. That was back in 1986. The mission was called Giotto and the comet was the famous one named after Edmond Halley, the 18th century astronomer who predicted its return.

Back then, the venerable TV astronomer Patrick Moore and James Burke conducted a live programme to bring the first pictures of the comet to the British public as they were received. Moore was in Darmstadt, Germany, where Esa’s mission control is located, and Burke was in London.

Viewers were promised the first ever view of the nucleus of a comet – the mountainous iceberg that evaporates to give the ghostly tails for which comets are famous.

The snag was that when the pictures arrived they were incomprehensible. They were garishly colour-coded, and not even the experts could interpret them. No one knew at the time the beauty of the comet that would be revealed by subsequent analysis.

Then, just around the time of closest approach, the signal from the spacecraft disappeared. The guests were left with no recourse but to speculate about whether Giotto could have been destroyed by the dust and debris coming off the nucleus. It makes uncomfortable, embarrassing watching even today.

But, if the stories are true, the damage was much worse than a few red faces. It is now a piece of space folklore that UK prime minister Margaret Thatcher was watching. She was so appalled by what she perceived to be a total waste of money that she began a severe tightening of the UK’s purse strings where Esa and space research were concerned.

That has now turned around completely with the UK being a committed investor in the space sector. The other thing that has turned around is the way science is communicated to the public.

This morning there were no red faces; just fantastic images, fantastic data and the promise of more fantastic science to come. Read the official statement from Esa here.

[Stuart Clark is the author of Is There Life on Mars? (Quercus)]