The Knick joins HBO's Boardwalk Empire as a show that seems juiced by the wider range of plotlines and stories allowed by diversifying the cast. 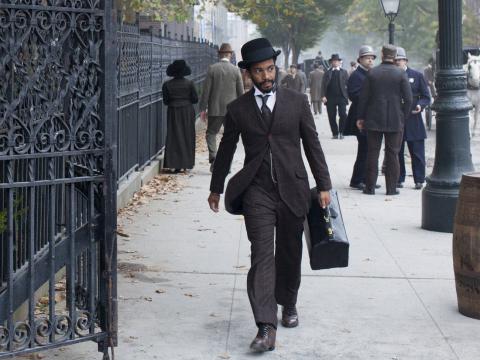 Andre Holland stars in The Knick on Cinemax.,Mary Cybulski
Cinemax's The Knick is an amazing bit of TV filmmaking: a gritty look at a turn of the century hospital, with explicit scenes showing how brutal early discoveries in surgery and medicine must have been in the year 1900.
But as much as I savored director Steven Soderbergh's innovative way of making a period drama feel modern, alongside Clive Owen's masterful take on a gifted, driven surgeon who is secretly a cocaine addict, my eye was drawn to a different character: Andre Holland's Dr. Algernon Edwards.
Edwards is a gifted, Harvard-trained surgeon who becomes the assistant chief of surgery at the Knickerbocker Hospital in New York, circa 1900. Trained in London and Paris, he takes the job at the insistence of the Robertsons, a wealthy family that bankrolls the institution.
He is also a black man, the son of the maid who has served the Robertsons for many years. And his appointment opens up a wide range of storylines often ignored by period films and TV shows that downplay race and avoid casting prominent nonwhite characters.
In fact, The Knick joins HBO's Boardwalk Empire as a show that seems juiced by the wider range of plotlines and stories allowed by diversifying the cast. Suddenly, a program that could have been stuck on one culture shifts, offering a broader look at race, class, gender, science and society in ways that turn storytellers into kids surveying a particularly large candy store. See a preview here and here.
The Knick would be a powerful series even without this advantage. Soderbergh, with co-creators Jack Amiel and Michael Begler, has developed a 10-episode series about a world on the verge of modernity. Doctors in the hospital are trying to learn how to successfully complete procedures we now take for granted, such as Cesarean sections and appendectomies, struggling for techniques that will not kill their patients.
Owen's determined, talented Dr. John Thackery is a perfect surgeon for these times. Arrogant and unswayed by the pressure of tackling procedures that often leave patients dead, he is skilled, resourceful and buoyed by the hidden use of opiates and cocaine. Injecting the drugs between his toes after late-night sessions in opium dens, he is a man drawn to the chaos of an addict's life, perhaps as a way to handle the pressures of his position.
He is also driven by the death of a mentor, played by Matt Frewer (Max Headroom, Orphan Black), which highlights the toll this brand of medicine can take on its practitioners.
Soderbergh and his writers depict the hospital's underbelly in many ways, from a corrupt administrator stealing for gambling debts to ambulance drivers fighting over corpses that they sell to the hospital for teaching/study purposes.
The director also uses modern music and shooting techniques to lend a contemporary feel to a period story. A camera strapped to Holland's head during a fight scene gives a unique, jarring perspective; handheld cameras lend a jittery, impatient pace to some scenes.
But Dr. Edwards' struggle also brings new layers to the story. Forbidden from joining in surgeries by a dismissive Thackery, the doctor decides to begin secretly treating black patients on his own.
Living in a roach-infested, rundown rooming house where his educated manner is seen as a challenge by some black people, Edwards trains black laundry workers and janitors to serve as nurses and receptionists, giving the area's black residents important access to health care.
Because race has so often been used as a shorthand for class in America, these stories open up new ways of talking about poverty and oppression at the century's turn. And because every period story is also about the time in which it is made, The Knick also gets to make poignant observations about how health systems treat the poor and people of color today.
Like many period films and TV shows — Steven Spielberg's Lincoln and AMC's Hell on Wheels, for instance — racial tolerance is used as a signal to the audience about which characters they should find sympathetic. So when a race riot breaks out after the death of a police officer, one way we learn which characters to like — and not — is how quickly they rush to protect innocent black people injured in the violence.
Boardwalk Empire found similar success last year when it brought on Jeffrey Wright to play the magnetic Harlem drug dealer Valentin Narcisse, setting up a war between him and Michael K. Williams' Chalky White. The conflict — and its thinly veiled references to Marcus Garvey — energized the show so much that both characters are prominently featured in ads for the show's upcoming and final season.
The Knick would be a groundbreaking series even without its race-centered storylines, planting a quality TV flag on Cinemax — which has been described dismissively as "Skinemax" for its late-night, soft-core adult movies.
But Dr. Edwards and his journey add new layers to an already compelling narrative, highlighting the wonderful stories that can come from taking advantage of onscreen diversity instead of avoiding it.
Subscribe to Portside