Is the firing of Steven Salaita the beginning of a new Blacklist?

Steven Salaita, an Arab-American Professor of American Indian Studies, was just fired from his job for tweeting criticisms of the Israeli massacre in Gaza. 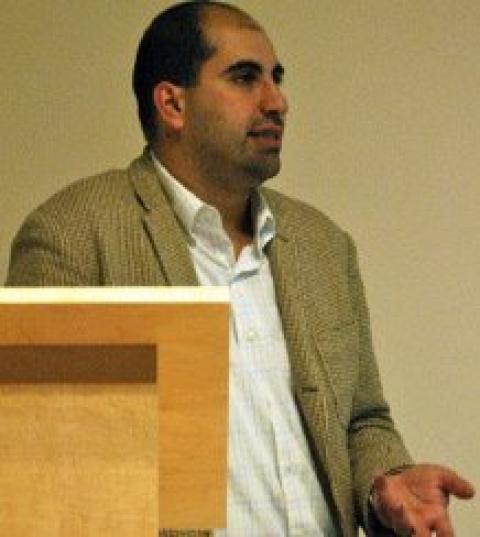 The University of Illinois, which fired Salaita, will try to tell you his job was ‘rescinded.’

But he was fired.

Here’s why the University and mainstream media don’t want to say he was fired.

Because firing a tenured professor purely for his political opinions, especially one with multiple academic publications to his record, means the University has violated the following:

3)     His rights as an employee at a public university, as well his rights to due process.

Here’s the single reason why we claim he was fired:  more than one month ago, Steven Salaita signed a contract to work at the University of Illinois.

Approximately three weeks later, he was told he no longer had that job.

That’s  a firing, not a rescission.

This incident signals the following:

—For those of us who have tenure in the academy, it tells us that our private expressions on social media may now outweigh our academic work.

Steven Salaita has published six academic monographs of distinction.  He was in fact hired for his scholarly excellence.  Clearly, his firing had nothing to do with that work. If Salaita’s case is established as precedent, comments we make on our own time can be used by the University to monitor us and ultimately to fire us.

—For those of us who do not have tenure in the academy, or are doing graduate work, Salaita’s case is a clear gag order.  Everyone already knows the high levels of stress and anxiety faced by untenured faculty produced by microlevel monitoring of social and professional behavior.  Salaita’s firing proves that our worst nightmares are true: University administrations are keeping track of what we do and say, even outside of work.

—Salaita’s case also has specific implications for faculty of color and minority faculty.   Cary Nelson, a past president of the American Association of University Professors, has charged that Salaita’s social media expressions fail some standard of “civility” and “collegiality.”

These terms are typically used to deny tenure and promotion to women and minority faculty.

As we all know, professors as a social group (including Professor Cary Nelson) are rarely known for their social graces.  Using language of “incivility” is clearly a signal that some ‘some groups’ lack the right ‘cultural grooming’ to join the academic club.

Anstup Basu, a faculty member in the Department of English at UIUC, and a colleague of Cary Nelson, told us:

[As regards] the nebulous charges pertaining to ‘civility’ and ‘tone.’ Who decides such standards and protocols in the public sphere? Like all of us, Salaita publishes his excellent academic work following the language games of the academy. But when it comes to his extramural presence in the wider public sphere, who are we to institutionally determine what language he should use and what tone? How can it be the University of Illinois’ or anyone else’s business to judge and police it? I therefore strongly feel that such charges of ‘uncivility’ begin from a patronizing position of majoritarian power, particularly because the issue at hand is one of colonial occupation and apartheid.

As we know, we have a long history of voices from margins being silenced and condemned by those in power precisely on the grounds of civility, propriety of language, and tone. From Churchill’s complaints about Gandhi’s ‘loincloth’ to relentless patronizing censures of rap lyrics and Black culture, where do we begin, and where exactly do we draw the line?

This is a matter of deep shame for a world class research University. The decision should be revoked immediately and a formal apology issued.

The charges of anti-Semitism that are always raised when we stand against the state of Israel, also does not work in the Salaita case.  Michael Rothberg is the Head of the Department of English at UIUC and the Director of the Initiative in Holocaust, Genocide, and Memory Studies.  He has made the following public statement in support of Salaita:

I have reviewed a large number of tweets sent by Professor Salaita during recent weeks. While I understand that they are partisan and angry messages—and therefore may be considered controversial—I do not agree that anything written there warrants firing or rescinding an offer that was already promised. Indeed, if academic freedom and the right to free speech do not guarantee controversial and offensive political expression—and especially expression outside the classroom—what are they good for?

Steven Salaita was a tenured Associate Professor who accepted one job and resigned another.  In between, he was fired.  He now has no job, no personal home to live in, and no insurance for his family, including his two year-old son.

The most important political lesson of the Salaita case is this:

that criticizing the crimes of the Israeli state is the new McCarthyism.

Steven Salaita is being fired because, much like suspected Communist sympathy during the Cold War, support for Palestine is the “third rail” of political expression from which Universities continue to retract their professed support for both academic freedom and free speech.

The academic community was as deeply involved in this process as any other segment of American society. In their willingness to punish the men and women who were fingered by the anticommunist professionals during the first stage of the operation, the nation’s educational leaders differed little from the movie moguls who imposed the Hollywood blacklist or the state and federal bureaucrats who fired people on the word of anonymous informers.

Academic freedom was no protection…it proved to be a highly malleable concept that could be manipulated to justify the exclusion of alleged Communists from the nation’s campuses.

University of Illinois has not just fired Steven Salaita.  It is trying to blacklist him.

His firing is part of an ongoing effort by ally states and their institutional proxies to punish critics of Israel, be it at demonstrations on the streets of London, Paris or Cairo, or in the halls of the University.

Salaita’s case also proves a crucial point of the Boycott, Divestment, Sanctions movement against Israel: that universities are not ‘neutral venues.’

Indeed, University of Illinois Chancellor Phyllis Wise who notified Salaita that he was fired, strongly opposed the American Studies Association vote to boycott Israeli Universities last December.  Steven played a leading role in the ASA boycott campaign and has written extensively about why such a campaign was necessary.

Chancellor Wise and University President Robert Easter, in a public statement, endorsed a statement released by the Association of American Universities that stated “any such boycott of academic institutions directly violates academic freedom…it is a principle that should not be abridged by political considerations.  American colleges and universities…must stand as the first line defense against attacks on academic freedom.”

Steven Salaita’s case is a landmark case for our times.  The massive public outpouring of support for a Palestinian scholar and a vocal critic of Israel is unprecedented in this country.  People are leaving angry comments in support of Salaita in the UIUC facebook page. One parent, Leighann Jones, wrote:

I am sending my daughter to you with the expectation that she will receive the best education that we can provide her. I am disheartened to read this afternoon that Chancellor Wise rescinded an offer to hire Steven Salaita based solely on his views of the Israeli attacks on Gaza. My daughter’s first lesson: Keep your mouth shut, or else.

The public outcry has exposed the silencing and intimidation that University administrators and powerful institutions have historically used against people who stand for Palestine.  And we need to keep speaking out.

Steven Salaita must have his job back. Until then our work is not done.[1]

[Tithi Bhattacharya is a Professor of South Asian History at Purdue University, a long time activist for Palestinian justice and on the editorial board of the International Socialist Review.

Bill V. Mullen is a Professor of American Studies at Purdue University. He is the author or editor of several books and on the Advisory Board for the US Campaign for the Academic and Cultural Boycott of Israel (USACBI).]

[1] Please sign the petition in support of Steven Salaita.