One for All, and All for Hunt

The dogs are “true altruists,” essentially willing to shorten their lives for the sake of the hive, They’re even further along the line of evolving into the mammalian equivalent of honeybees than we thought. 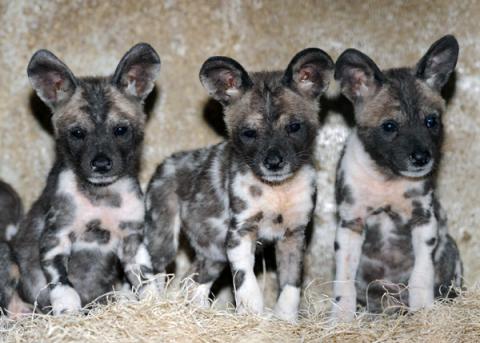 SOUTH LUANGWA NATIONAL PARK, ZAMBIA — We saw the impala first, a young buck with a proud set of ridged and twisted horns, like helical rebar, bounding across the open plain at full, desperate gallop. But why?

A moment later somebody in our vehicle gasped, and the answer became clear. Rising up behind the antelope, as though conjured on movie cue from the aubergine glow of the late afternoon, were six African wild dogs, running in single file. They moved with military grace and precision, their steps synchronized, their radio-dish ears cocked forward, their long, puppet-stick legs barely skimming the ground.

Still, the impala had such a jump on them that the dogs couldn’t possibly catch up — could they? We gunned the engine and followed. 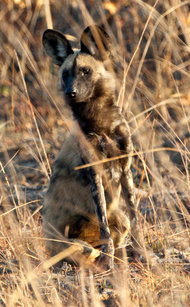 A young adult African wild dog in Kafue National Park in Zambia. New studies have shown that these dogs are willing to shorten their own lives for the good of the pack.

The pace quickened. The dogs’ discipline held steady. They were closing the gap and oh, no, did I really want to watch the kill?

To my embarrassed relief, the violence was taken off-screen, when prey and predators suddenly dashed up a hill and into obscuring bushes. By the time we reached the site, the dogs were well into their communal feast, their dark muzzles glazed with bright red blood, their white-tipped tails wagging in furious joy.

“They are the most enthusiastic animals,” said Rosie Woodroffe of the Institute of Zoology in London, who has studied wild dogs for the last 20 years. “Other predators may be bigger and fiercer, but I would argue that there is nothing so enthusiastic as a wild dog,” she said. “They live the life domestic dogs wish they could live.”

In 1997, while devising an action plan to help save the wild dog species, Lycaon pictus, Dr. Woodroffe felt anything but exuberant. Wild dogs were considered among the most endangered of Africa’s mammals; Dr. Woodroffe had yet to see one in the wild, and she feared she never would.

Antelope in Zambia. In one attack, six African wild dogs worked together to bring one down.

“I remember sitting on my kitchen floor thinking, ‘They’re going to go extinct,’ ” she said. “They have such a massive requirement for space in a world where human populations are only increasing.”

Today, although still classified as endangered, African wild dogs are holding their own over all, and in some parts of the continent are doing better than expected. Today, even yellow-bellied safari goers are regularly treated to displays of the canids’ extraordinary hunting prowess.

“Everything I thought 20 years ago was, if not entirely wrong, then certainly inaccurate,” said Joshua R. Ginsberg, the president-elect of the Cary Institute of Ecosystem Studies in Millbrook, N.Y., who was Dr. Woodroffe’s adviser. “Wild dogs turn out to be far more resilient than anyone expected.”

Scientists have been impressed by the dog’s behavioral and dietary flexibility, and its capacity to coexist with people (providing the people don’t set out snare traps or kill off all its prey). Population estimates remain crude guesses at best, but some researchers suspect that the census may be inching toward 7,000 dogs across the continent — a distressingly small fraction of the presumed premodern population but still an improvement over the 1990s estimates of 4,000 to 5,000 dogged survivors. And packs have reappeared in places like northern Kenya, where they were long presumed extinct. 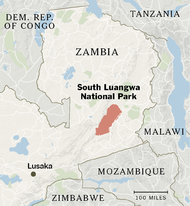 Scientists who study the splotchy, autumnally tricolor dogs celebrate their subject as an outlier among canids, a species that split off from wolves, jackals and other members of the dog clan about three million years ago and has trotted along in Darwinian independence since.

“They’re on a distinct branch of the evolutionary tree, the only species in their genus,” said Scott Creel, a professor of ecology at Montana State University and a field researcher with the Zambian Carnivore Programme. “That’s one reason I feel they’re so important to conserve.”

Researchers have known for some time that wild dogs are exceptionally social and civic-minded. Among most group-living carnivores, big adults feed first, gulping down the choicest organs and leaving junior diners to scrounge through gristly leftovers. Among wild dogs, said Patrick R. Thomas, the curator of mammals at the Bronx Zoo, “it’s the exact opposite.”

Greetings before the hunt. Researchers have found that the fate and fortunes of wild dogs are strongly linked to the relative abundance and distribution of other carnivores.

For puppies too young to leave the den, or for injured pack members unable to hunt, hale-bodied adults go further, provisioning the needy by regurgitating a portion of a recent meal.

Researchers have also known that wild dogs are so-called cooperative breeders. In any given pack of closely related animals, a single male and female will do the bulk of the reproducing, while the other half-dozen or so adults serve as guardians, babysitters, even wet nurses for the alpha pair’s pups. Family is family, after all.

Yet researchers continue to be impressed by the depths of the dogs’ self-sacrificing behavior. In one recent study, Dr. Creel and his colleagues determined that the bigger a pack grew, the more efficiently it hunted and the greater the number of offspring it raised. However, the researchers were startled to see that not everyone benefited from the swelling ranks.

“Big packs with lots of offspring turn out to have poor adult survival,” Dr. Creel said. The cost of regurgitating food for a surging number of pups, it seemed, exceeded the advantages of bringing down more prey. As a result, nonbreeding adults in big packs would gradually become malnourished and end up dying at a somewhat younger age than their peers in smaller clans.

The dogs are “true altruists,” essentially willing to shorten their lives for the sake of the hive, Dr. Creel said, adding, “They’re even further along the line of evolving into the mammalian equivalent of honeybees than we thought.”

Researchers also consider wild dogs a critical element of efforts to establish a vast wildlife reserve, roughly the size of Sweden, that would span parts of Zambia, Angola, Botswana, Zimbabwe and Namibia. If approved, the reserve, known as the Kavango-Zambezi Transfrontier Conservation Area, or Kaza, would rank as the largest terrestrial protected area in the world and would acknowledge the reality that nonhuman animals don’t carry passports or respect national borders.

As midsize carnivores, wild dogs offer clues to the health and stability of a wide array of other animal populations, not only the herbivores on which the dogs prey but the other major carnivores with which they compete. Researchers have found that the fate and fortunes of wild dogs are strongly linked to the relative abundance and distribution of rival predators, particularly lions and spotted hyenas.

Not only do all three carnivores favor similar game items for dinner — impalas, warthogs, a nice beefy wildebeest — but lions and hyenas are notorious carcass thieves and will readily exploit their comparatively greater body mass to claim the fruits of wild dog labor.

The bigger carnivores will also consume the wild dogs’ young. “Lions don’t go out of their way very often,” Dr. Creel said, “but they’ll make the effort to dig up a wild dog den and kill the pups.”

Wild dogs have an array of tricks and adaptations for avoiding contact with larger predators. They communicate through soft calls and birdlike twitters that are difficult for any but their large-eared pack mates to hear. They kill efficiently, often disemboweling prey while it’s still in midair; eat quickly; and, once they’ve abandoned a carcass, rarely return to it, lest a scavenging lion be up for a fight.

Wild does not mean mild, however, and wild dogs will readily take a few moments from their busy day to harass carnivores closer to their own size, like leopards.

Some researchers worry that wild dogs are doing relatively well lately because lions and to a lesser extent hyenas are not — the results of disease outbreaks, conflict with farmers, trophy hunting and other problems.

Through projects like Kaza, conservationists seek to encourage complementarity and habitat diversity: the wide Serengeti-type horizons that favor big cats and bone-crushing hyenas and the scrubbier woodlands where wild dogs thrive, where every day another spectacle unfolds and you don’t know whether to look or turn away.