Israelis in US: An Open Letter to American Jews on Gaza War

In its public appeal to the American Jewish community, Israelis For a Sustainable Future (IFSF), a new organization of Israelis living in the U.S., says "maintaining the occupation is what this war is all about." The IFSF appeals to American Jews to oppose the current policies of the Israeli government, and support Israeli voices for peace. "Israel needs your support to break out of the cycle of violence," the IFSF Open Letter says. 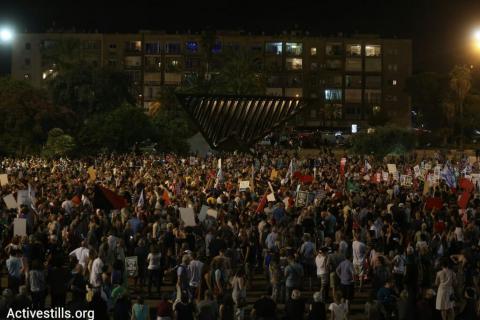 Thousands gather at a peace rally in Tel Aviv to demand an end to violence in Gaza, August 16, 2014., ActiveStills.Org

‘We are reaching out to you because we want to re-examine what it means to be pro-Israel or pro-Palestine,’ says a public letter published by Israelis for a Sustainable Future. ‘We argue that these terms might be one and the same.’

A group of Israelis living in the U.S. has published an open letter the the American Jewish community, calling on it to join them in opposition to the war in Gaza and the years-long blockade Israel has imposed on the Strip. While condemning Hamas’ targeting of civilians, the group states that “maintaining the occupation is what this war is all about.”

The group, calling itself Israelis for a Sustainable Future, was started in response to the war, but organizers told me that they wish to continue their activity even if a ceasefire is reached. The appeal to the Jewish community was born out of its engagement and influence over Israel-Palestine, organizers say.

We are a group of Israelis currently living in the U.S. We are reaching out to you because we oppose the actions of the Israeli government in Operation ‘Protective Edge.’

This does not mean we don’t recognize the threat presented by Hamas to the Israeli people. We oppose firing of weapons into civilian population and the sacrifice of civilians by the regimes of both Hamas and the Israeli government. Calling to stop the bombing of Gaza does not mean we don’t realize the impossible conditions imposed on the residents of southern Israel. Nor does it mean we don’t demand security for them. But we also recognize that their plight is consistently ignored by the Israeli government until it becomes convenient for exploitation. We have seen three major military operations in less than six years. They repeat themselves because they don’t work.

Yes, Hamas reserves are temporary depleted and the group is temporarily hindered. But this is not a moral price worth paying. Even if it were, killing thousands of civilians and displacing of hundreds of thousands doesn’t weaken Hamas in the long run. This bloodshed only feeds the one resource it can’t go without: hate.

Only meaningful peace talks and an end to the ongoing occupation in the West Bank and in Gaza (a blockade is still occupation) will prevent both the next round of rockets into Israel and the next round of indiscriminate killings in Gaza. We are reaching out to you because we want to re-examine what it means to be pro-Israel or pro-Palestine. We argue that these terms might be one and the same. We believe that supporting equal rights for both peoples is the only way to build a better Israel and a better Palestine and we want the American Jewish community to stand behind that message.

But maintaining the occupation is what this war is all about. Unfortunately, the regimes in Israel are becoming increasingly cynical, willing to sacrifice as many people as necessary to maintain their position of power and their control over the Palestinian people. We believe this war could have been avoided. We don’t believe all Palestinians want to kill us. And we are happy to explain where we are coming from.

We believe that a biased media attempts to draw symmetry that does not exist. Just look at the numbers. Look at the pictures. Throwing blame at international criticism isn’t making Israel look any better. Taking action to stop human rights violation would. We obviously do not condone any form of anti-Semitism in this discourse, but we also feel that dismissing the entire discourse as anti-Semitism is not helpful to anyone.

Most of all, we believe that blood is blood, all equal and all worth the same. And we are well aware of what happens when the lives of one people are deemed to be worth less than those of others.

Israel needs your support to break out of the cycle of violence:

We encourage you to tell your community leaders to critically examine the Israeli government policies they rally behind. We urge you to support the moderate voices in Israel, forces that find themselves increasingly under attack by their own government and the Israeli media, and even physically assaulted by right winged vigilantes. We ask you to write to your congressional representatives to share your conviction that Israel can only be safe and prosperous if it stops the killing of civilians, ends the occupation of Gaza and the West Bank and guarantees freedom and equality to all of its citizens. We invite you to start a fruitful dialogue with us.

Thank you,
IFSF | Israelis For a Sustainable Future

[Naom Sheizaf  is an independent journalist and editor. He has worked for Tel Aviv’s Ha-ir local paper, for Ynet.co.il and for the Maariv daily. His work has recently been published in Haaretz, Yedioth Ahronoth, The Nation and other newspapers and magazines.]