Obama, the Neo-Cons and Liberal Interventionists 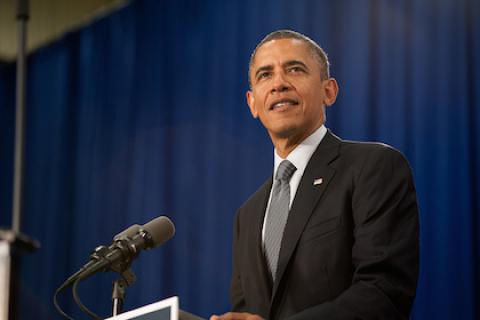 President Obama’s foreign policy has been disjointed and even incoherent,Christopher Dilts for Obama for America

President Barack Obama’s foreign policy has been disjointed and even incoherent because he has – since taking office in 2009 – pursued conflicting strategies, mixing his own penchant for less belligerent “realism” with Official Washington’s dominant tough-guy ideologies of neoconservatism and its close cousin, “liberal interventionism.”

What this has meant is that Obama often has acted at cross-purposes, inclined to cooperate with sometimes adversaries like Russia on pragmatic solutions to thorny foreign crises, such as Syria’s chemical weapons and Iran’s nuclear program, but other times stoking these and other crises by following neocon demands that he adopt aggressive tactics against Russia, Syria, Iran and other “enemies.”

So, we have Obama covertly arming Syrian rebels, many of whom were interchangeable with Islamic jihadists, but then sending the U.S. military back into Iraq to fight some of these same extremists who spilled back into Iraq, the country where they got their start after President George W. Bush’s neocon-inspired invasion.

We also have Obama spending years ratcheting up sanctions on Iran over its nuclear program – despite Iran’s repeated offers to accept limits that would guarantee no military applications – and now finding that he needs Iran’s help to broker political changes in Iraq.

And, we have Obama needing Russia’s assistance to resolve the crises with Syria, Iraq and Iran but letting his foreign policy team alienate Russian President Vladimir Putin by stoking a confrontation over a U.S.-backed coup in Ukraine, which has seen the U.S. State Department weaving a false narrative that blames Putin for instigating the conflict when he was clearly reacting to provocations from the West. [See Consortiumnews.com’s “The Powerful Group Think on Ukraine.”http://consortiumnews.com/2014/08/18/the-powerful-group-think-on-ukraine/]

But at the core of Obama’s muddled foreign policy is his unwillingness to challenge the prime sources of Middle Eastern instability, traditional U.S. “allies”: Israel and Saudi Arabia. Those two countries feed the violence across the region, Israel through its brutality toward the Palestinians – providing a recruiting bonanza for Islamic extremists – and Saudi Arabia via its covert funding for jihadists.

However, because Israel and Saudi Arabia get a pass on much of what they do – and Israel in particular wields extraordinary influence over the U.S. political/media process – Obama has typically tried to finesse the chaos that these “allies” wreak.

Here is also where the neocons and the “liberal interventionists” come into the picture. They demand that Obama react to “humanitarian” crises in disfavored countries, especially those on Israel’s “regime change” list, like Iran and Syria.

Official Washington put a big black hat on Syrian President Bashar al-Assad and white hats on the rebels fighting to overthrow him despite the fact that the notion of “moderate” rebels was always a myth – as even Obama has acknowledged – and despite the gradual recognition that the Syrian rebels were actually dominated by al-Qaeda-connected extremists. [See Consortiumnews.com’s “Syrian Rebels Embrace Al-Qaeda.”http://consortiumnews.com/2013/09/26/syrian-rebels-embrace-al-qaeda/]

In an interview this month with New York Times columnist Thomas L. Friedman, Obama responded to criticism that he should have done more to support rebels fighting to overthrown Assad by saying that the notion that arming the rebels would have made a difference has “always been a fantasy.

“This idea that we could provide some light arms or even more sophisticated arms to what was essentially an opposition made up of former doctors, farmers, pharmacists and so forth, and that they were going to be able to battle not only a well-armed state but also a well-armed state backed by Russia, backed by Iran, a battle-hardened Hezbollah, that was never in the cards.”

Obama added that his administration continues to have trouble finding, training and arming enough secular Syrian rebels to make a difference: “There’s not as much capacity as you would hope.”

Nevertheless, bending to the oust-Assad demands of neocons and “liberal interventionists,” Official Washington’s conventional wisdom remains that Obama must do more to force “regime change” in Syria even as Sunni radicals from the Al-Qaeda-affiliated Nusra Front and the even more brutal Islamic State of Iraq and Syria have come to dominate the rebellion.

In August 2013 – still trying to maintain the Syrian “good guy/bad guy” dichotomy, “Assad bad/rebels good” – the neocons and their “liberal” cohorts came close to engineering a massive U.S. military intervention against the Syrian government over dubious charges that Assad’s regime had launched a major sarin gas attack on civilians outside Damascus on Aug. 21.

Brushing aside doubts about this scenario among U.S. intelligence analysts, Secretary of State John Kerry – who has behaved like a hand puppet for the State Department’s war hawks since taking the job in early 2013 – issued what sounded like a declaration of war against Syria in a speech on Aug. 30.

But Obama, working behind the scenes with Putin, pulled the plug on the planned U.S. air war and – again with Putin’s help – got Assad to surrender all his chemical weapons (though Assad continued denying a role in the sarin attack, which later evidence suggested might have been carried out by Islamic extremists as a provocation to draw the U.S. military into the conflict on their side).

But Putin’s intervention – disrupting the neocons’ plans for “regime change” in Syria – had other consequences. It turned Putin into Official Washington’s latest bête noire. He would soon find his more immediate interests targeted as neocons, such as National Endowment for Democracy President Carl Gershman, and State Department hardliners encouraged a political crisis in Ukraine on Russia’s western border.

Even as the likes of neocon Assistant Secretary of State for European Affairs Victoria Nuland and neocon Sen. John McCain clearly pushed for the ouster of elected Ukrainian President Viktor Yanukovych, the Obama administration and the U.S. mainstream media blamed the crisis that followed Yanukovych’s Feb. 22 overthrow on Putin. [See Consortiumnews.com’s “What Neocons Want from Ukraine Crisis.”http://consortiumnews.com/2014/03/02/what-neocons-want-from-ukraine-crisis/]

Rather than challenge this false anti-Putin narrative, Obama acquiesced to the “group think,” even joining the Putin-bashing over Ukraine. That, in turn, complicated the prospects for cooling down other international hotspots, such as Syria and Iran. I’m told that senior Russian officials feel so betrayed by Obama and so distrust him that they have little interest in cooperating with him in the future.

As Ukraine descended into civil war and as the U.S.-backed Kiev regime dispatched neo-Nazi militias to the east to serve as storm troopers killing ethnic Russians, the West looked on impassively. Despite the death toll rising into the thousands, Obama also averted his gaze. The black-hat/white-hat narrative (Putin in the black hat and the Kiev leaders in the white hats) had to be maintained. [See Consortiumnews.com’s “Ignoring Ukraine’s Neo-Nazi Storm Troopers. ”http://consortiumnews.com/2014/08/13/ignoring-ukraines-neo-nazi-storm-troopers/]

Similarly, when Israel launched its latest “mowing the grass” slaughter of Palestinians in Gaza in July, Obama defended Israel’s actions even though it further fueled anti-Western anger across the Muslim world. The “responsibility to protect” crowd inside the administration – the likes of U.S. Ambassador to the UN Samantha Power – also fell silent. “R2P” apparently is a situational ethic depending on who’s doing the killing and who needs the protection.

Ignored during the bloodshed in Ukraine and Gaza, the principle of “R2P” was suddenly back in vogue when the Islamic State of Iraq and Syria expanded its offensive inside Iraq threatening Yazidis and other religious minorities. To avert a potential humanitarian disaster in Iraq, Obama ordered U.S. aerial attacks on ISIS forces, a bombing campaign that relieved the threatened Yazidis and helped Kurdish forces reclaim some strategic positions around Mosul.

In a bid to calm sectarian tensions in Iraq, Obama also pressed for the removal of Iraq’s Shiite Prime Minister Nouri al-Maliki and his replacement by another Shiite leader, Haider al-Abadi. But that required the help of Shiite-rule Iran, which remains near the top of the Israeli/neocon “enemies list.”

Following this anti-Iran line, Kerry and the State Department have been dragging their heels on a final agreement that would constrain but not end Iran’s nuclear program – and then ease economic sanctions against Iran. Despite those sanctions and the frustrations over the nuclear talks, Iranian authorities helped Obama by convincing Maliki to step down.

But another way to look at Obama’s “weakness” is that he has rarely stood firmly against the neocons and their “liberal interventionist” buddies. He has let himself be bullied into counterproductive military adventures, including the counterinsurgency “surge” in Afghanistan in 2009, which accomplished little, and the ill-fated “regime change” in Libya in 2011 which turned that country into a failed state that has destabilized northern Africa. (In both cases, Obama succumbed to pressure from Secretary of State Hillary Clinton and other hawks.)

Obama also covertly authorized the arming of “moderate” Syrian rebels, emptying CIA warehouses of “deniable” weapons (though he didn’t go as far as Clinton and other hawks wanted). The result of Syria’s civil war, however, was the strengthening of the extremists from the Islamic State of Iraq and Syria whose strategy of unapologetic barbarity was so extreme that they were repudiated by al-Qaeda. That brutality was demonstrated again with this week’s execution of U.S. journalist James Foley.

A more cohesive – and pragmatic – approach to the world and especially the Middle East would involve repudiating the selective R2P “morality” of the neocons and the “liberal interventionists” along with distancing U.S. foreign policy from the influences of Israel and Saudi Arabia.

A “realist” strategy would call for Obama to work more consistently with former adversaries, most notably with Russia and Iran but also Syria in a regional approach toward defeating Islamic terrorism. The realignment would require cracking down on covert Saudi funding for the jihadists and demanding that Israel finally reach an equitable settlement with the Palestinians.

The new strategy would mean seeking a practical (though far from perfect) political resolution of the Syrian conflict with President Assad continuing in power at least for the immediate future. The strategy would finalize an Iranian nuclear deal that would offer reasonable guarantees that the nuclear project will not produce a bomb and give Iran relief from punishing economic sanctions.

Another step would involve pressuring the Ukrainian government to reach a negotiated settlement with ethnic Russian rebels in the east and recognizing that Kiev needs positive relations with Russia as well as with the European Union. Resolution of that civil war also could help calm European financial markets and avert the possibility of a “triple-dip” European recession with blowback harm on the U.S. economy.

This “realism” would surely provoke howls of protests from neocon and R2P advocates – because of the poor human rights records of Syria, Iran and other “adversaries” – but it would reduce Official Washington’s hypocrisy which tolerates human rights abuses when inflicted by forces dispatched by Israel (to kill Palestinians), Ukraine (to kill ethnic Russians), or Saudi Arabia (to engage in acts of terrorism in Syria, Iraq, Chechnya and elsewhere).

If Obama would embrace his inner “realist,” there would be an internal consistency to his approach to the world and other countries would know what to expect, rather than have to deal with his ad hoc reactions to international crises. This more cooperative approach also would not stop Obama from criticizing the human rights abuses of any government or advocating for democratic reforms.

But this pragmatism for peace – and the end of neocon absolutism – might have the significant benefit of ending unnecessary wars and saving lives.

[Investigative reporter Robert Parry broke many of the Iran-Contra stories for The Associated Press and Newsweek in the 1980s. You can buy his new book, America’s Stolen Narrative, either in print here https://org.salsalabs.com/o/1868/t/12126/shop/shop.jsp?storefront_KEY=1037 or as an e-book from Amazon and Barnes and Noble.]