The higher hotel wage was the product of two years of organizing by a coalition that included labor unions, more than a dozen neighborhood councils, the ACLU and other nonprofits, which billed the measure as a critical step in addressing poverty. 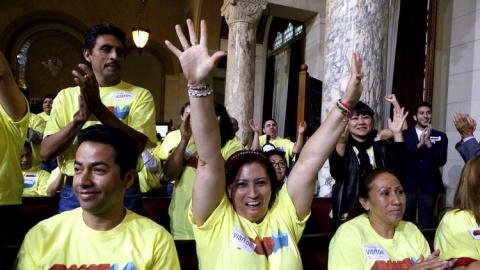 Big hotels in Los Angeles will soon be required to pay at least $15.37 an hour to their workers – one of the highest minimum wage requirements in the country.

The City Council voted 12 to 3 on Wednesday to impose the wage requirements on large hotels, handing a major victory to organized labor and a defeat to business groups. Lawmakers said the measure would pull thousands of hotel workers out of poverty, helping them provide for their families.

“We will change lives by increasing what people are making," said Councilman Paul Koretz.

Councilman Bernard C. Parks spoke against the measure, saying wage initiatives should not be “just for a specific union or industry or business.” He said his South Los Angeles district cannot afford to see more workers lose their jobs.

“I can’t afford for those who are actually working to be part of the unemployment process because we did something … that did not look at the larger picture,” he said.

Parks and two others -- Councilmen Mitchell Englander and Paul Krekorian -- voted against the measure. Because the vote was not unanimous, the ordinance will require a second procedural vote next week.

Mayor Eric Garcetti has already said he will sign the plan.The higher hotel wage was the product of two years of organizing by a coalition that included labor unions, more than a dozen neighborhood councils, the ACLU and other nonprofits, which billed the measure as a critical step in addressing poverty.

“The men and woman who work in this industry create enormous profits for the industry, and it’s time that we invest in them and not just in the brick and mortar of the buildings that they work in," said Maria Elena Durazo, head of the Los Angeles County Federation of Labor. "They deserve better. The hotels can afford it."

Hotel and business groups warn it could ultimately harm those same workers by forcing hotels from Harbor Gateway to the San Fernando Valley to cut jobs.

“There will be layoffs and terminations of 2,000 people,” Michael Czarcinski, chairman of the Hotel Assn. of Los Angeles, told the council. “You will be able to empty this room 10 times.”

Business groups have threatened to sue over the plan, arguing that the city is flouting an earlier law that placed a series of conditions on any future wage hikes. They also argued that the new ordinance appears to violate the federal equal protection clause by unfairly targeting one industry.

Several hotel managers complained that it made no sense to single their businesses out for higher wages, especially as the city considers a proposal from Garcetti to gradually boost the citywide minimum wage to $13.25 in three years.

Councilman Mike Bonin, who co-authored the hotel wage hike, said lawmakers in Los Angeles and across the state have already been providing financial incentives to the hotel industry, auto dealerships and Internet companies.

Analysts have estimated that anywhere from 5,300 to 13,500 workers could be affected by the ordinance, depending on how it is implemented. The California Hotel & Lodging Assn. estimates that 13 hotels would face the higher wage requirements in 2015, with another 28 joining them in 2016.

The last time that Los Angeles mandated a higher minimum wage was seven years ago, when lawmakers targeted hotels near Los Angeles International Airport. Two out of three reports requested by the city from outside economists found that employment growth suffered as a result.

“It cost jobs,” said Bruce Baltin, senior vice president of PFK, a firm selected by the Los Angeles Area Chamber of Commerce to do the analysis. “That’s just a fact of life.”

Councilwoman Nury Martinez, who represents the central San Fernando Valley, said the benefits of the measure will greatly outweigh the costs. Under the current pay structure, hotel employees frequently have to work two jobs, forcing them to return home late at night, she said.

Christopher Thornberg, founding partner of Beacon Economics, warned the higher wage will have an adverse affect on jobs in the hospitality industry. Thornberg, who also analyzed the LAX wage hike, complained that lawmakers were ignoring "reasonable analysis."