So far, 121 countries have signed the treaty, and 154 voted in favor of its adoption in April 2013 in the General Assembly. The successful entry into force of the ATT will be a big win for arms control campaigners and NGOs, who have been fighting for the regulation of the arms trade for more than a decade. 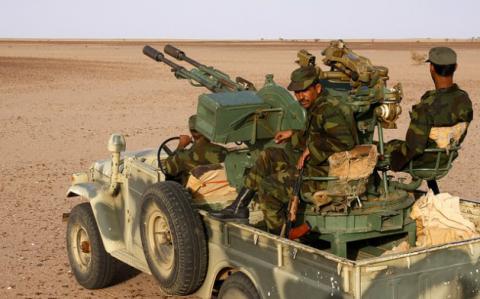 State parties to the Arms Trade Treaty (ATT) are obligated under international law to assess their exports of conventional weapons to determine whether there is a danger that they will be used to fuel conflict., Karlos Zurutuza/IPS

UNITED NATIONS, Sep 28 2014 (IPS) - With state support moving at an unprecedented pace, the Arms Trade Treaty will enter into force on Dec. 24, 2014, only 18 months after it was opened for signature.

Eight states – Argentina, the Bahamas, Bosnia and Herzegovina, the Czech Republic, Saint Lucia, Portugal, Senegal and Uruguay – ratified the Arms Trade Treaty (ATT) at a special event at the United Nations this past Thursday, Sep. 25, pushing the number of states parties up to 53.

As per article 22 of the treaty, the ATT comes into force as a part of international law 90 days after the 50th instrument of ratification is deposited.

“We are dealing with an instrument that introduces humanitarian considerations into an area that has traditionally been couched in the language of national defence and security, as well as secrecy." -- Paul Holtom, head of the peace, reconciliation and security team at Coventry University’s Centre for Trust, Peace and Social Relations

According to a statement by the Control Arms coalition, “The ATT is one of the fastest arms agreements to move toward entry into force.”

The speed at which the treaty received 50 ratifications “shows tremendous momentum for the ATT and a lot of significant political commitment and will,” said Paul Holtom, head of the peace, reconciliation and security team at Coventry University’s Centre for Trust, Peace and Social Relations.

“The challenge now is to translate the political will into action, both in terms of ensuring that States Parties are able to fulfil – and are fulfilling – their obligations under the Treaty,” Holtom told IPS in an email.

So what are the requirements under the ATT?

ATT states parties are obligated under international law to assess their exports of conventional weapons to determine whether there is a danger that they will be used to fuel conflict.

Article 6(3) of the treaty forbids states from authorising transfers if they have the knowledge that the arms would be used in the commission of genocide, crimes against humanity or war crimes. Article 7 prohibits transfers if there is an overriding risk of the weapons being used to undermine peace and security or commit a serious violation of international humanitarian or human rights law.

In addition, states parties are required to take a number of measures to prevent diversion of weapons to the illicit market and produce annual reports of their imports and exports of conventional arms.

The treaty applies to eight categories of conventional arms, ranging from battle tanks to small arms and light weapons.

The successful entry into force of the ATT will be a big win for arms control campaigners and NGOs, who have been fighting for the regulation of the arms trade for more than a decade.

When Control Arms launched a global campaign in 2003, “Mali, Costa Rica and Cambodia were the only three governments who would publically say that they supported talk of the idea of an arms trade treaty,” Anna MacDonald, director of the Control Arms secretariat, told IPS.

NGO supporters of the treaty often brought up the fact that the global trade in bananas was more regulated than the trade in weapons.

The organisations in the Control Arms coalition supported the ATT process through “a mix of campaigning, advocacy, pressure on governments” and “proving technical expertise on what actually could be done, how a treaty could look, [and] what provisions needed to be in it,” MacDonald said.

All of the legwork has paid off, as the treaty will become operational far earlier than many expected.

Today’s 53rd ratification is just the start. So far, 121 countries have signed the treaty, and 154 voted in favour of its adoption in April 2013 in the General Assembly.

“There’s no reason why we would not expect all of those who voted in favour to sign and ultimately to ratify the treaty,” said MacDonald.

Sceptics contend that the worst human rights abusers will not agree to the treaty. For example, Syria was one of three states that voted against the ATT’s adoption in the General Assembly.

However, MacDonald believes that once enough countries join the ATT, the holdouts will face an enormous amount of political pressure to comply as well.

With a sufficient number of states parties, the ATT will “establish a new global standard for arms transfers, which makes it politically very difficult for even countries that have not signed it to ignore its provisions,” she told IPS.

MacDonald cited the Ottawa Convention, which banned anti-personnel landmines, as an example.

Many of the world’s biggest landmine users and exporters have not joined the Ottawa convention, but the use of landmines has fallen anyway because of the political stigma that developed.

Much work remains to be done in the months before Dec. 24 and in the upcoming years as the ATT system evolves.

States will need to create or update transfer control systems and enforcement mechanisms for regulating exports, imports and brokering as well as minimising diversion, according to Holtom.

“There are a lot of issues to be discussed before the Conference of States Parties and it will take several years before we can really see an impact,” he told IPS. “But we need to now make sure that the ATT can be put into effect and States and other key stakeholders work together towards achieving its object and purpose.”

The first conference of states parties will take place in Mexico in 2015.

Participating countries must provide their first report on arms exports and imports by May 31, 2015 and a report on measures that they have taken to implement the treaty by late 2015, Holtom said.

No matter the challenges to come, the simple fact that arms trade control is on the agenda is quite historic.

“We are dealing with an instrument that introduces humanitarian considerations into an area that has traditionally been couched in the language of national defence and security, as well as secrecy,” said Holtom.

On Thursday, U.N. Secretary-General Ban Ki-moon claimed, “Today we can look ahead with satisfaction to the date of this historic new Treaty’s entry into force.”

“Now we must work for its efficient implementation and seek its universalisation so that the regulation of armaments – as expressed in the Charter of the United Nations – can become a reality once and for all,” he said in a statement delivered by U.N. High Representative for Disarmament Affairs Angela Kane.