US Treasury and Transportation Departments Hold a Privatization Party

Despite the warning signs all around us, the Departments of the Treasury and Transportation appear to be running headlong into a crash - and not just the kind of crash that takes place on a highway. The Obama administration appears to have bought into Public Private Partnerships spinning straw into gold. 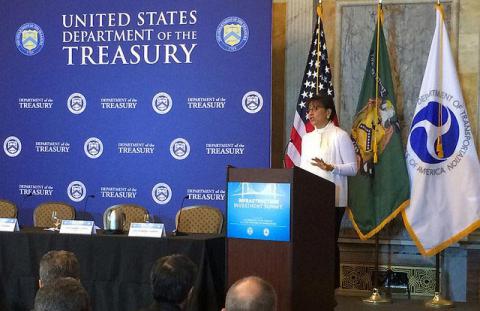 The Infrastructure Investment Summit hosted by the US Departments of Treasury and Transportation on September 9, 2014.,US Department of Commerce

The infrastructure investment summit held last month by the Departments of the Treasury and Transportation appears likely to provide a boost to the privatization industry, ironically, just as privatized infrastructure is filing for bankruptcy.

Chances are, whatever you were doing on September 9, 2014, (births and deaths excluded) will not affect your life as much as that summit, "Expanding Our Nation's Infrastructure Through Innovative Financing," did.

Living through the era of Jamie Dimon's "creative" financing might rightly make people suspicious of "innovation." Indeed, rational people might want to return to the tried and true processes and relationships that, for decades, have provided our roads, bridges and other transportation infrastructure instead of the "innovations" that now privatize the roads that were the poster children of privatization into bankruptcy, through a process that highway expert Randy Salzman recently exposed. That complex process uses the tax and bankruptcy codes and assumptions that private is always better than public to place as much as 97 percent of the costs on the public.

Clearly something has gone wrong with turning to the private sector to provide our roads, bridges and other infrastructure, and this is an odd moment for two federal departments to spend their time and our money to hold a privatization investment summit.

The Goals of the Privatization Investment Summit?

According to the conference conveners, their goal was "to bring together a wide range of stakeholders and experts to discuss challenges and opportunities in this critically important space." The participants' input will be included in recommendations to be given to President Obama on November 14.

Note that the terms PPP, P3 and public-private partnership are those that the people who do these deals now prefer because they sound so positive and friendly. In reality, it would be more accurate to use the original terms - privatization, leasing or contracting out public infrastructure. Even more accurate would be to call them a sale because the contracts that transfer public assets, such as water or highways, through PPPs, P3s and public-private partnerships tend to last at least for decades.

These are the questions that the conference organizers asked conference participants to discuss:

Anyone who has paid attention during the recent era of tranches should get cold shivers when they hear that these failed ideas are listened to at all.

Is That All There Is?

Two things are particularly interesting about the summit conveners' list of ways to finance transportation infrastructure: the narrow range of options and the exclusion of certain very viable options.

The most important option that was omitted from discussion was paying for transportation infrastructure through our taxes. Not including taxes means ignoring straightforward methods that have successfully funded highways for decades.

Perhaps the conference organizers were aware of the value of using taxes, but knew that the anti-tax movement has made taxes appear so toxic that they are on par with Lord Voldemort aka "He-Who-Must-Not-Be-Named." The conveners may be correct in that concern. Indeed, we appear to be facing a repeat of the Know-Nothing Party of the mid-19th century, with its anti-tax, anti-immigrant positions.

However, ignoring the benefits of taxes as a revenue source forces us into depending on the people who crashed the economy to fund our infrastructure.

Another oddity among summit attendees is the novel way they talk about "risk." Consider how we now understand the risks and consequences of climate change and its highly negative effects: "Our key findings underscore the reality that if we stay on our current emissions path, our climate risks will multiply and accumulate as the decades tick by." As a result, many of us are now advocating changing our behavior to avoid the risks of climate change.

Meanwhile, the Departments of the Treasury and Transportation and privatization proponents continue to advocate embracing risk as just a normal part of financial management. They treat risk as just something actuaries and accountants include in calculating an appropriate level of payment for a set level of risk.

A nice theory, but one that ignores risks created by multi-decade infrastructure privatization contracts, and in particular, the difficulty of accurately predicting costs.

Not only are there too many unknowns to accurately calculate the costs of risk through many decades, but infrastructure privation contracts freeze terms through "adverse action" terms in the contracts and use them to hold up the public for more money. As Woody Guthrie sang,

Some will rob you with a six-gun,
And some with a fountain pen.

The conference organizers obviously see things differently. According to them, "When the private sector takes on risks that it can manage more cost-effectively, a PPP may be able to save money for taxpayers and deliver higher quality or more reliable service over a shorter time frame." (p.4) Nice theory, but, so far there is no evidence to show that the private sector has shared, minimized or even assumed any financial risk in these deals in which the profits are privatized and the costs socialized.

According to the conveners, "Access to low cost, tax-exempt bond financing for projects exclusively owned and operated by state and local governments has discouraged those governments from seeking private equity financing." (p.4) They say this as if there was something wrong with raising and using the public's money in a prudent way, while at the same time, the finances for privatized roads and other infrastructure depend on federal, state and local subsidies.

Normally, interest on private money invested in an infrastructure project would be taxed as income to the investors. But with so many cash-strapped states desperate to build or repair public infrastructure, many states see no other option for financing projects other than offering private investors tax-free investments.

Tax-exempt financing means the investor will not owe taxes on interest income from that investment. However, when investors are allowed to keep their interest income, there is less money to spend on public needs.

Among the increasing number of options for building transportation infrastructure in recent years have been the Transportation Infrastructure Finance and Innovation Act (TIFIA), Build America Bonds (BABs), and tax-exempt private activity bonds (PABs). TIFIA provides loans, loan guarantees and lines of credit to fund surface transportation. Build America Bonds were part of the financial response to the Great Recession. Private activity bonds allow investors to forego paying taxes on interest accrued on the bonds, which increases the amount of money investors receive.

However, the new hot concept in private sector investment is infrastructure privatization through embracing risk. Indeed, the Treasury and Transportation report promotes the value of taking on risk throughout the document.

The private sector has also promoted risk as just a normal part of corporate management. Deloitte, for example, has created a series on risk intelligence, that is, a risk management philosophy that is not focused on risk avoidance and mitigation. Instead, according to Deloitte, it uses "risk-taking as a means to value creation." Indeed, Deloitte has actually trademarked its Risk Intelligent Enterprise and created an interactive graphic to explain RIE.

Deloitte is not alone in championing value in risk, including even embracing risk in the core of a business' operation and maintenance (O&M). However, the list of what Deloitte sees as advantages of the risk model seems more like a new world in which meanness rules. Those private sector concepts include embracing contracting work out and essentially turning its workforce into insecure temps.

For its part, the Treasury and Transportation report embraces PPPs as a means of transferring "risks to the private sector that it can manage more cost effectively" - or so it says. This new model, it says, "creates value for taxpayers by lowering long-term project costs, improving the quality of services, or both." The truth of those claims remains to be proven.

It is interesting that the report acknowledges that, so far, the amount of private funds invested in PPP transportation projects between 2007 and 2013 is "only 2 percent of overall capital investment in the nation's highways during that same period." That vanishing minute investment fails to measure up to the hype of privatization. That situation may change in fiscal year 2015 if the president's proposed budget is approved. The summary of the proposed budget is aligned with the Treasury and Transportation Departments' goals:

2. Expand the use of modern financing strategies

3. Improve the permitting process through the establishment of a new center to cut through "red tape"

Transportation projects based on privatization raise many questions. How will the public be affected? Who will actually pay? What does "risk" in this context mean? Can risk really be transferred from one entity to another? How would transferring risk from one party to another and availability payments operate?

In fact, there seems to be little or no risk assumed by the private contractors. For example, the contracts' adverse action terms in Article 14 and the complexity of the contracts are likely to ensure that the public will not want to run afoul of Article 14's punitive actions.

Are these ideas superior to the system, developed during the Eisenhower administration, of using taxes that had a clear link to the process of driving and setting the fuel tax at a level appropriate to the needs of maintaining the country's transportation infrastructure?

Recently, there has been a spate of PPPs going bankrupt. Despite the warning signs all around us, the Departments of the Treasury and Transportation appear to be running headlong into a crash - and not just the kind of crash that takes place on a highway. The Obama administration appears to have bought into PPPs spinning straw into gold.

It remains to be seen whether what seems to be a scripted event will play out and whether public reactions will change minds. While the morning's conference was made available online, most of the afternoon was apparently spent behind closed doors in meetings between public officials and private investors.