Henry Segerman and Saul Schleimer paint beautiful shadows based on the maths of stereographic projection, a method originally used by cartographers to map the Earth 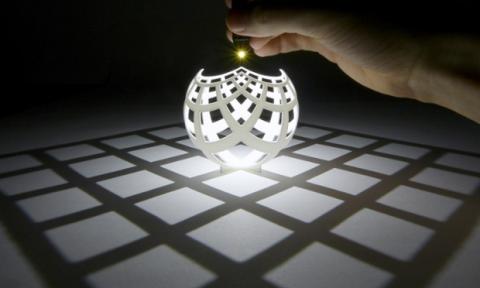 Henry, you light up our world: the torch at the top of the sphere creates a beautiful pattern on the floor. , Henry Segerman

Like a Halloween pumpkin, the hollow sphere casts a dramatic shadow across the room.

The curved lines on the spherical shell magically produce a grid of perfect squares. It would make for an amazing lampshade, or maybe even a disco ball.

The light sculpture is also a very cool reinterpretation of some ancient geometry. It’s illuminating – in both senses of the word.

Consider what the sculpture is doing. Light from a single source (at what would be the North Pole) hits a three-dimensional shape (the spherical shell) and then produces a two-dimensional image (the shadow pattern).

In other words, the shadow is a 2D map of the 3D sphere. Formally, we call it a stereographic projection. Cartographers and astronomers have long used this method to draw maps of the Earth and the sky.

The image below, for example, is a stereographic projection of the globe from the North Pole. The red line shows a straight line from the North Pole through New York and on to the flat map of the world, analogous to the path of light from a source at N. Illustration: Henry Segerman

Scientists would originally have used pencil and paper, and more recently computers, to draw the maps. The idea of using light and shadow is an innovation of the mathematicians Henry Segerman, of Oklahoma State University, and Saul Schleimer, of the University of Warwick.

Usually you start with a pattern on a sphere, and then see the map it produces. Henry thought it would be fun to do it the other way around: to start with the map, and then work out the pattern on the sphere. 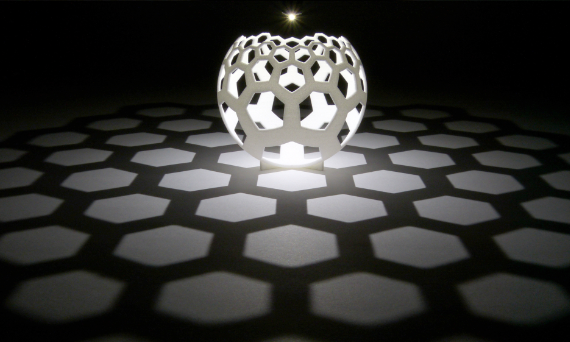 He first chose a square grid, and using design software worked out the shell pattern that would produce it. Next up he chose the hexagonal grid. I love this one since the pattern of shrinking hexagons looks very organic, a sort of cocoon.

Now for the maths bit. What’s interesting about stereographic projections – and why they are important – is that all the angles on the sphere are preserved on the shadow.

Maps made using stereographic projection will massively distort the sizes of countries (as we saw above) yet since the angles are preserved these maps are of more use for navigators.

“Stereographic projection is a beautiful and important idea, and these models show how it works in an immediately understandable way,” says Saul. “I think people respond even better to a real-life physical demonstration than a computer animation - you can’t cheat when it’s something as simple as light and shadow!”

Henry and Saul then turned to a well-known spherical tiling, called a (2,3,5) tiling, made up of triangles, but arranged to make diamonds, larger triangles and pentagons. They discovered that in the nineteenth century, the German mathematician August Möbius - yes, he of the eponymous strip - had drawn a sketch of how the tiling would look under a stereographic projection. Henry and Saul decided to make it.

“Maybe the only reason it hadn’t already been done before 3D printing is that any errors in the geometry get magnified, so you need a very precise way to make the model,” Henry says. 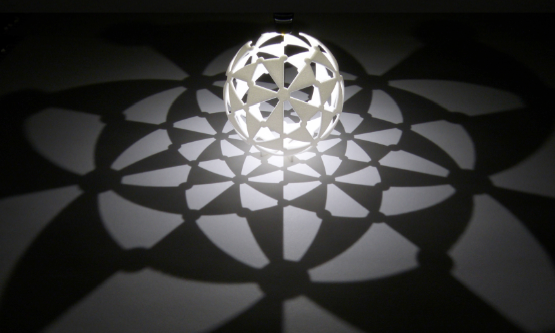 Not only angles, but circles are also preserved. The circles on the sphere become perfectly circular shadows.

Henry and Saul made a similar design based on Möbius’s design: the big circles enclose pentagons and the small ones triangles. Gorgeous! 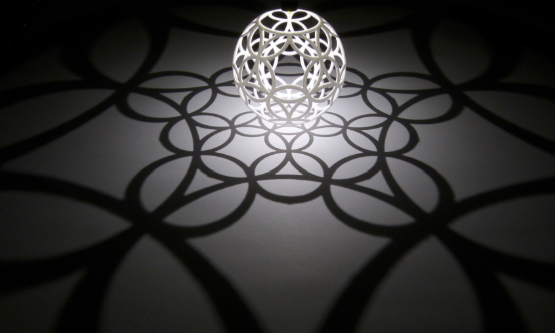 Having done triangles, squares, pentagons and hexagons, there was only one way to go: heptagons.

It is impossible to create a pattern of identical heptagons around a sphere for reasons that were known to the Greeks, and which you will have to accept or read about here.

If you already know about hyperbolic geometry you will dig how cute the sculpture is – and if you don’t just enjoy the pictures.

The hemisphere, in fact, provides four different hyperbolic models! Firstly, the hemisphere is itself a model.

Secondly, the classic stereographic projection provides what is known as the Poincaré disc model. (You might recognise this pattern from some Escher prints). When the light source is at infinity, we get the Beltrami-Klein model. And when you put the light source at the equator and shine it against a wall, you get the Poincaré half-plane model. And sometimes at Halloween you get some ghosts. 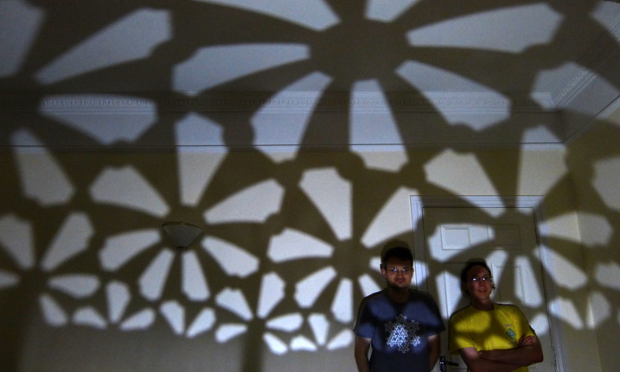 You can buy Henry and Saul’s stereographic models from Shapeways.