Legislation by Democratic Gov. Pat Quinn and the Illinois Legislature, would have made deep cuts to employees retirement benefits. The so-called "pension reform law" was ruled unconstitutional by a Illinois Circuit Judge today. 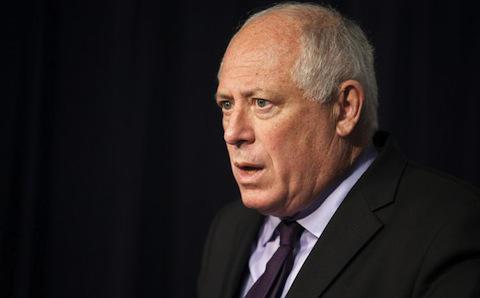 We Are One Illinois-Statement on Pension Decision

An Illinois judge has ruled that a law intended to fix the nation's worst state employee pension crisis violates the state Constitution.
Illinois Attorney General Lisa Madigan said she would immediately appeal the ruling to the state supreme court and ask it to rule on the matter on an expedited basis.

"The Act without question diminishes and impairs the benefits of membership in State retirement systems," Belz wrote in the ruling. "Illinois Courts have consistently held over time that the Illinois Pension Clause's protection against the diminishment or impairment of pension benefits is absolute and without exception...."Because the Act diminishes and impairs pension benefits and there is no legally cognizable affirmative defense, the Court must conclude that the Act violates the Pension Protection Clause of the Illinois Constitution."

The overhaul was approved by lawmakers and Democratic Gov. Pat Quinn last year. Years of underfunding had put the state's pension systems about  $111 billion short of what they need to cover benefits promised to employees.

One year earlier, the shortfall was nearly $101 billion. Combined, the state's five retirement systems have only 39 percent of what's needed to pay out promised pensions, the same as last year.

The law reduces benefits for retirees but also reduces employee contributions. The lawsuit argued that the Constitution prohibits reducing benefits or compensation.

The state argued that pensions can be modified in times of crisis.

A spokesman for Quinn expressed confidence Friday that the state supreme court would uphold ruling.

"We have always anticipated legal challenges to this critical law and urge the Illinois Supreme Court to take the matter up as soon as possible," Quinn spokesman Grant Klinzman said. "This historic pension reform law eliminates the state's unfunded liability and fully stabilizes the systems to ensure retirement security for employees who have faithfully contributed to them. We're confident the Illinois Supreme Court will uphold this urgently-needed law that squarely addresses the most pressing fiscal crisis of our time."

Gov.-elect Bruce Rauner issued a statement, saying,: "It is my hope that the court will take up the case and rule as soon as possible. I look forward to working with the legislature to craft and implement effective, bipartisan pension reform."

State Senate President John Cullerton, who has long questioned the constitutionality of the pension reform law, said:  "Today's ruling confirms that, while the need for reform is urgent, the rule of law is absolute. I remain committed to working with all parties to address our budget pressures and pension problems in a manner consistent with the Illinois Constitution."

Labor leaders, meanwhile, hailed the ruling as as victory.

"This is a huge victory for teachers, nurses, firefighters and police and all the working people in the state," Illinois Federation of Labor President Dan Montgomery said. "They did what they said they were going to do, rule it unconstitutional. These benefits are absolutely protected and you can't change it just because you want to. The court ruling was very definitive and clear."

Laurence Msall, president of the non-partisan watchdog Civic Federation, said Friday the group is pleased that the pension issue is moving through the court system so that the state can ultimately figure out how to resolve its fiscal crisis.

"It's necessary for (the pension law's) constitutionality to be determined," he said.

The only way to do that is for the Illinois Supreme Court to rule, he said.

The Civic Federation supports the pension law because it reduces the state's unfunded liability to a "reachable" level without eliminating pension benefits altogether, Msall said.

Without the pension law, the state would face a $682 million increase in its pension contribution for fiscal year 2016 from 2015, he said. That would put the total contribution at $7.5 billion in the coming 2016 fiscal year.

"It's clearly not sustainable that the state can find those resources without dramatic cuts in government service or dramatic increases in taxation," Msall said.

We Are One Illinois

A Sangamon County Circuit Court judge today -- Friday, Nov. 21 -- granted motions brought by the We Are One Illinois union coalition and the other plaintiffs, ruling that the pension clause of the Illinois Constitution is absolute in its protection of public pensions and that legislation reducing the pensions of active and retired teachers, state employees and university employees is unconstitutional.

We Are One Illinois issued the following statement to the news media:

"We are gratified by the court's ruling today, which makes clear that the Illinois Constitution means what it says. The court held today, as our unions have long argued, that the state cannot simply choose to violate the Constitution and diminish or impair retirement benefits if politicians find these commitments inconvenient to keep.

"This is a victory for every Illinois resident who believes in the integrity of the Constitution. It is a victory for a basic principle of fairness, that working people and retirees who earned modest pensions and always paid their share should not be punished for politicians' failures. And it is a victory for the members of our unions, who work hard every day in every Illinois community to teach kids, protect public safety, care for the most vulnerable and much more. Today they are more secure in the knowledge that their life savings can't be taken away from them.

"Going forward, our union coalition repeats our longstanding commitment to work with anyone of good faith to develop a fair and constitutional solution to fund the state's retirement systems."