Friday’s actions aren’t going to leave its stores empty or its business model overhauled. So what would make them a success from the perspective of the labor activists? 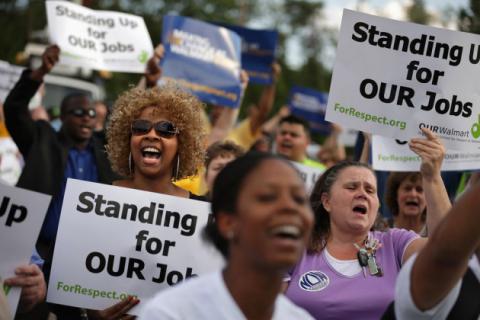 For the third year in a row, some Walmart workers will mark Black Friday by going on strike. OUR Walmart, the union-backed group behind the strikes, promises Friday will bring its biggest walkout ever. Wal-Mart Stores (WMT), on the other hand, remains publicly dismissive of the protests.

Friday’s actions aren’t going to leave its stores empty or its business model overhauled. So what would make them a success from the perspective of the labor activists? Here are a few ways to understand the strikes as they unfold and in the months after.

Will striking workers capture media attention? The well-worn images of Black Friday—door-busting lines, overloaded shopping carts, fights over discounted items—don’t yet include striking retail workers. OUR Walmart clearly wants to change that. Like other union-backed “corporate campaigns” waged against name-brand companies, the Walmart effort is in large part a media project. So far unable (mostly) to disrupt the flow of Walmart products, organizers now want to disrupt the giant retailer’s image by publicizing everything from carbon emissions and alleged bribery to the understocked store shelves.

Organizing strikes like the one on Black Friday also helps propel workers and their individual stories onto the nightly news. “[Expecting] somebody’s going to get 500,000 Walmart workers to walk off their job, I think that’s unrealistic,” United Food & Commercial Workers Union President Joe Hansen, whose union is the driving force behind OUR Walmart, told me last year. “But what I think is happening, and I think Walmart hates this as much as anything else, is it’s calling publicity to how they treat workers.”

But it isn’t easy to hold the media’s attention. Two years ago, U.S. Walmart worker strikes were still a brand-new spectacle. Last year’s news of a Walmart store holding a food drive for its own employees helped drive a new wave of Black Friday stories. This year, along with walkouts and civil disobedience, strikers are adding fasts and sit-down protests inside Walmart stores to their playbook. They will make news, but that doesn’t mean they will capture the attention they did before.

Can the strikers mobilize more Walmart employees than before? The anti-Walmart effort relies on the efforts of many people who don’t work for Wal-Mart. Public school teachers this week will protest the impact of low wages on students. Populist Democrats (Obama not included) will likewise target the retail giant as an emblem of America’s workplace woes. But OUR Walmart’s chance at holding public attention and truly unsettling the executive ranks at the company rests on its stated ambition to build a true mass movement of Walmart employees.

In 2012, OUR Walmart set itself apart from past failures of union-backed Walmart efforts by announcing that about 500 employees had participated in Thanksgiving-week strikes. That’s a tiny minority of Wal-Mart’s 1.4 million-strong U.S. workforce but still a dramatic show of dissent against a company famous for not tolerating it. Strikers hoped that maiden effort would lay the groundwork for much bigger strikes, but so far that doesn’t seem to have happened. (The OUR Walmart campaign has never released an estimate for how many Walmart employees went on strike or otherwise participated in 2013’s Black Friday protests.)

Does Black Friday get others to join in the future? Strikes are also a way of developing rank-and-file leaders and engaging other employees for future efforts. That’s especially true of “minority” strikes like those at Wal-Mart, where only a small fraction of the workforce walks out in hopes of inspiring more peers to join in the next time. Venanzi Luna, a Walmart deli worker, told me that the successive strikes at her store in Pico Rivera, Calif., have successfully forced out managers who were disrespecting employees and drawn in employees who started out too scared or skeptical to strike. “People say, ‘Ah, they’re just going back on strike—same old thing,’” says Luna. “But I’m amazed at how much people are like, ‘I’m going to join you this time. I’m going to join you.’”

But there’s been backsliding as well: Last year, an Aurora (Colo.) employee named Barbara Gertz told me she had gotten about 30 co-workers to sign a petition that helped get a bad manager fired. Afterwards, she said, the company deployed representatives from Arkansas headquarters to hold mandatory meetings condemning OUR Walmart, and her colleagues changed their tune. “Everyone thinks I’m crazy at my store,” she told me at the time, since she could lose her job. (A year and a half later, Gertz is still there and now one of OUR Walmart’s most visible members.)

Do Black Friday strikes stem retaliation? One reason more Walmart workers haven’t gone on strike may be that Wal-Mart fired a couple of dozen of those who did last year. The company denies it broke the law, and the National Labor Relations Board is slated to decide. But those firings reinforced the worst fears of some so-far silent employees, such as one who last year told me he “hated” Wal-Mart but would never join a protest.

While firing workers for going on strike is often illegal, pro-labor advocates and academics argue that the government’s slow process and light penalties don’t do much to dissuade companies from doing it. As a result, a good strike plan has to include attempts to avert or avenge retaliation from management. To discourage fast-food franchisees from messing with strikers, for example, politicians and clergy have personally escorted them back to work at the end of their strikes. So along with how many employees defy those firings by going on strike themselves on Friday, the walkouts should be judged by whether they can force a spotlight on the firings that have happened so far and on how the campaign handles any pushback from Wal-Mart management once the TV cameras have cleared out.

Do the protests change Wal-Mart? Unlike some low-wage worker organizing campaigns, OUR Walmart insists it’s not out to win unionization, just a transformation in Wal-Mart’s working conditions, company culture, and corporate citizenship. That hasn’t happened yet. Organizers say it was the protests that spurred Wal-Mart’s plans to pay all employees more than the minimum wage and the reforms it rolled out last year on scheduling. Wal-Mart contends it has always been listening to employees and looking for ways to improve.

The more Wal-Mart’s policies change, however, the more the strikers can claim vindication. But time is not on their side: The further Wal-Mart’s business model spreads into the broader economy, the more organized labor’s crisis mounts.

Eidelson is a reporter for Bloomberg Businessweek in Washington.