labor Some Low-Paid Workers Will Not Have a Happy Thanksgiving

Wal-Mart, Target, Macy's, Radio Shack and other retailers are requiring their low-paid workers to report. Why? There is nothing essential about buying gewgaws, gizmos and garments from these mass marketers of consumer excess that warrant them forcing their employees to give up their family meals on this one day of Thanksgiving. 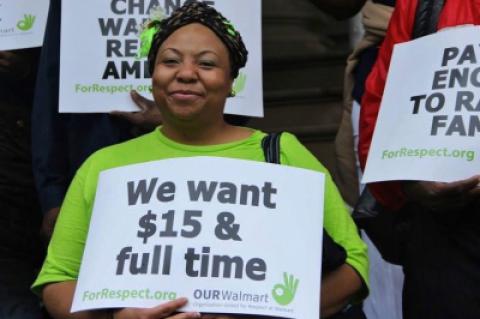 Thanksgiving -- a time of grace and family sharing -- will start with an extra-graceful act from the White House this year.

Just as every president since Lincoln has done, Barack Obama will grant clemency to two turkeys that otherwise could've become the main entree for the First Family's holiday dinner. This traditional presidential pardon of the gobblers provides a bit of good PR for the National Turkey Federation, the lobbying group that arranges for one of its members to supply the birds. Therein lies this year's extra touch of grace: Obama will be pardoning hardcore Republican turkeys!

Well, who knows whether the fowls themselves have any deeply partisan views, beyond anti-hatchetism. But even if any turkeys did try to vote in the Nov. 4 midterm elections, surely they would've been stopped by the razor-sharp voter ID laws that GOP officials have been imposing on our democratic process, ironically attempting to repress the Democratic vote.

However, guess who did vote Republican in the midterms with thousands of their special interest dollars: The turkey industry lobbying group, plus the very corporate farm that shipped the two birds to Obama. The Turkey Federation pumped nearly $160,000 into this year's anti-Obama Congressional candidates, and Cooper Farms of Ohio chipped in more than $46,000 to GOP candidates, plus some $66,000 to the Federation's Republican electioneering effort. The turkeys in the Cooper coop also donated to the failed effort by Sen. John McCain to defeat Obama in 2008, and to Mitt Romney's ill-fated 2012 effort.

Yet, the Democrat in the White House will shun the chance for partisan retribution, exercising unilateral executive action to spare the lives of the two Cooper turkeys. Now, we'll see if the GOP speaker of the House, John Boehner of Ohio, will sue Obama once again for executive overreach. This time for sparing turkeys without Congressional approval.

Everyone from the Obama family in the White House to my little family in Texas will take a deserved pause from the unrelenting, daily intensity of work on Thanksgiving Day. But let's take a moment to consider those millions who'll not be allowed to enjoy this pause.

Of course, there are firefighters, police, hospital workers and others who must stay on the job, but at least they know that they're providing essential services for our society. Yet Wal-Mart, Target, Macy's, Radio Shack and other retailers are also requiring their low-paid workers to report. Why? There is nothing essential about buying gewgaws, gizmos and garments from these mass marketers of consumer excess that warrant them forcing their employees to give up their family meals on this one day of Thanksgiving.

These giants already exploit the day after Thanksgiving, which they've appropriately dubbed "Black Friday," as a dark day of retail profiteering. The chains open as early as one minute after midnight on this Friday morning, yet even that's not early enough to satisfy some of the plunders of consumer pocketbooks. So they've moved their Black Friday start back into Thursday, during the family mealtime of Thanksgiving Day itself, opening their doors at 6 p.m. or earlier. Some are even starting at 6 a.m. on Thursday, essentially wiping out this day of family grace for every employee they require to be at work. Show up ... or lose your job. Thanks, boss.

A mall outside of Buffalo has gone even more extreme, requiring its 200-plus stores to open on Thanksgiving Day or pay a $200-an-hour fine. What we have here is the insatiable excess of what Pope Francis recently condemned as "unbridled consumerism." Yet a Wal-Mart PR flack claims to be doing consumers a favor by staying open on a spiritual day to "provide what consumers need."

Bovine excrement! Wal-Mart has nothing that needs to be bought on a holiday, and any of the stuff it sells can be bought the very next day from companies that respect their employees' and America's values. To see what major retailer closed on Thanksgiving check out