Remembering the Wades, the Bradens and the Struggle for Racial Integration in Louisville

On a October morning, Ebbs is standing next to a historical marker erected near the Wade home site a few years ago. "I’ve made sure that my children understand the significance of the fact that there’s a monument here and it is our blood relatives that went through what they did to receive something like this. So I make sure that I definitely give it the respect that it’s due."

December 2, 2014 Rick Howlett WFPL, The News for Louisville, an NPR affiliate
Printer friendly
Remembering the Wades, the Bradens and the Struggle for Racial Integration in Louisville Published December 2, 2014 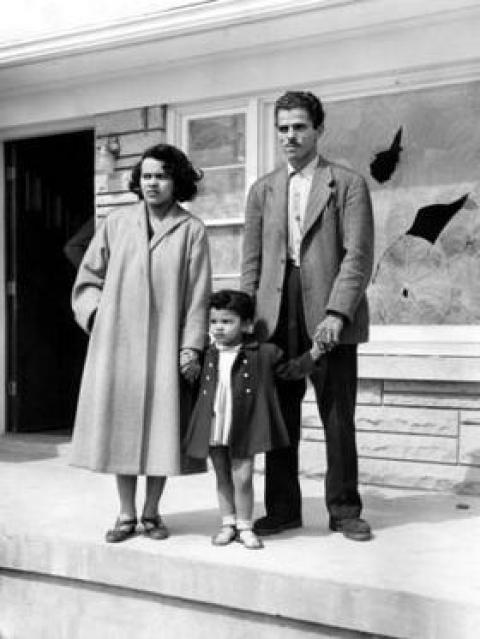 Andrew, Charlotte and Rosemary Wade stand on the front porch of their new home in Shively the day after someone hurled a rock through the front window. , Credit Al Blunk / The Courier-Journal
This year, many in Louisville have been marking the anniversary of a touchstone event of the Civil Rights era.

It started 60 years ago when white activists, led by Carl and Anne Braden purchased a home on behalf of a young black family.

That act touched off weeks of racial violence and led to serious criminal charges against the activists.

Today, the neighborhood in Shively seems a most unlikely place for cross-burnings, gunfire and a dynamite attack, but that’s exactly what happened along the street over the course of several weeks in 1954.

The hostility began when an African-American family—Andrew Wade, his pregnant wife, Charlotte and their 2-year-old daughter Rosemary—moved into their new home at 4010 Rone Court.

Andrew Wade was an electrician who wanted to move his family to the suburbs but was turned down by a succession of white real estate agents, who refused to cross the illegal but still highly observed line of segregation.

In an interview from the 1980s featured in the documentary "Anne Braden: Southern Patriot," Wade recalls a piece of advice he received from agent.

"He said 'Wade, let’s be realistic—if you see a house, you like the house, regardless of where it is, get a white person if necessary if it’s in a white neighborhood to buy the house for you and transfer it to you. It’s that simple.'"

So, that’s what he did. Wade enlisted the help of acquaintances Carl and Anne Braden, left-wing activists who had been vocal in their opposition to Louisville’s housing segregation laws.

The transaction was completed but trouble began as soon as the Wades moved in.

"That night, they heard gunshots, and somebody was firing at the house, and Andrew says he told his wife to get down, but it didn’t hit anybody. And they looked out and there was a cross burning in the field next to them," Anne Braden recalled in the documentary.

There would more trouble in the days to come; a stone bearing a racial epithet hurled into a window, the local dairy refused to deliver milk; the Wades’ newspaper subscription canceled because the carrier wouldn’t deliver it.

Police were stationed nearby for protection, but the Wades and their white allies didn’t trust them, so they formed a committee whose members would take turns staying in the house.

One of the guards was Lewis Lubka.

"I was in the back kitchen with a gun. And when we were shot at we shot back. I was working days and helping guard the house at nights," said Lubka, the last surviving activist who's now 88 and lives in Fargo, North Dakota.

Several  weeks went by and tensions seemed to ease a bit. But just after midnight on June 27, 1954:

"We was coming in and a bomb went off under the house," Lubka said.

The home was blown up with dynamite. The explosives were placed under Rosemary's room. No one was in the house at the time.

Cate Fosl is a biographer of Anne Braden and heads the Anne Braden Institute for Social Justice Research at the University of Louisville. She said it was no secret who was responsible for this and other attacks, but:

"No indictments were returned against any of the neighbors, even though they had admitted to burning a cross and being hostile to the idea. But all of the indictments were against the whites who supported the Wades in this quest for a house," Fosl said.

Anne and Carl Braden during Carl's sedition trial in Louisville. He was convicted on December 13, 1954.
Credit Charley Darneal / The Courier-Journal

Anne and Carl Braden and the five other whites were charged with sedition, accused of hatching a Communist plot to buy the home, blow it up, touch off a race war and overthrow the Commonwealth of Kentucky.

Today, it sounds outrageous. But in an interview from the collections of the Kentucky Historical Society, Anne Braden provided some context: this happened at the confluence of McCarthyism and the Supreme Court's 1954 Brown v. Board of Education ruling that outlawed school segregation.

"And I always felt that the Wades and us became lightning rods. They couldn’t get at the Supreme Court but that could get to us," Anne Braden said.

Carl Braden was convicted of sedition and spent eight months in prison.

The following year a ruling came down from the U.S. Supreme Court in a Pennsylvania case that said, in essence, sedition is a federal crime, not a state offense.

Carl Braden’s state conviction was later reversed and the charges against the other defendants were dropped.

Branded as Communist troublemakers, all the defendants had trouble finding work in the following years.  Carl Braden died in 1975. Anne Braden continued her work opposing housing and school segregation.

The Wade family attempted to repair their home, but amid continuing hostility, sold the house at a loss and moved back into west Louisville, where Charlotte Wade still lives.  She no longer speaks publicly about the case. Andrew Wade died in 2005.

Anne Braden, who died in 2006 at the age of 81, told the Kentucky Historical Society she had no regrets about helping the Wades buy their dream home.

"It would have been unthinkable for us to say no, because this is something we believed in. You live by what you believe in or you don’t, that’s all."

Steven Ebbs is a great-nephew of Andrew and Charlotte Wade and lives near their former home in Shively.
Credit Rick Howlett

Fosl said the Bradens and the Wades would be proud of how the once-troubled Shively neighborhood has changed.

"It is one of the most integrated, multi-racial, multi-cultural neighborhoods in Louisville today," Fosl said.

On a October morning, Ebbs is standing next to a historical marker erected near the Wade home site a few years ago.

He’s the great-nephew of Andrew and Charlotte Wade, and lives down the street from 4010 Rone Court, now called Clyde Drive.

Ebbs has been the family’s spokesman during the anniversary commemorations.

"It’s something that I really take pride in," Ebbs said.

"I’ve made sure that my children understand the significance of the fact that there’s a monument here and it is our blood relatives that went through what they did to receive something  like this.  So I make sure that I definitely give it the respect that it’s due."

(Historic photos courtesy of The Courier-Journal.) More photos can be seen here: http://www.courier-journal.com/picture-gallery/news/history/2014/09/26/…