The Power of Political Athletes to Puncture Privilege

The great Indian writer Arundhati Roy once said, “…in the midst of putative peace, you could, like me, be unfortunate enough to stumble on a silent war. The trouble is that once you see it, you can’t unsee it. And once you’ve seen it, keeping quiet, saying nothing, becomes as political an act as speaking out. There’s no innocence. Either way, you’re accountable.” 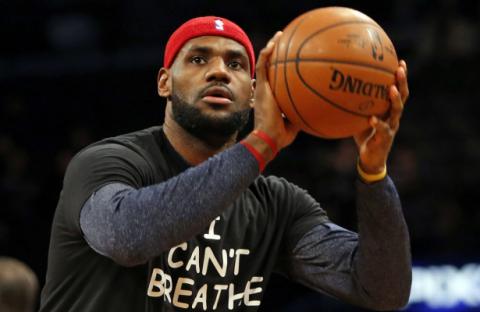 I have a second cousin by marriage, let’s call him Frank. He’s a white guy who lives in a middle-class exurban enclave and thinks about politics about as often as he thinks about particle physics—never. He’s not rich and he’s not poor. Like a lot of folks in this country, he works as an independent contractor in a job so boring I can’t even describe it without getting drowsy. He’s a great dad and he plays fantasy football and that’s about it. When the Ferguson protests began after the killing of Michael Brown, he didn’t talk about it, post about it, and when I would talk to him, it was clear that he was not thinking about it. It was like asking him for his opinion about life on Mars, something completely beyond anything that he saw as relevant. This is in and of itself a form of both class and race privilege. Frank does not have to worry about how he or his son has to act around a police officer. He does not have to consider how the country where he lives, pays taxes, and votes sees black lives as disposable. Even the death of Eric Garner, in all its video horror, was something that he did not notice. Then athletes started to raise their hands on the football field in a “hands up don’t shoot” gesture. Then his son and daughter’s heroes, people like LeBron James, Kobe Bryant and many more, wore T-shirts with Eric Garner’s last words, “I can’t breathe.” Then the sports radio shows that he listens to when driving—he is in his car about four hours a day—started debating whether or not it was “appropriate” for these kinds of political gestures to take place on the court.

All of a sudden, against his will, Frank—sitting in his car—had to mentally engage with why a group of wealthy athletes (some who make more than Frank will see in a lifetime) would stick their necks out and stand with the families of Eric Garner and Michael Brown. He had to reckon with why it was so personal to them. Frank went home and actually watched the video of Eric Garner being killed. To put it mildly, it messed with his head. Now he is angry. He is angry at the police and he is angry at a system that polices black communities with a level of violence he has never had to see or experience. In other words, Frank is waking the fuck up.

This is a deeply underdiscussed aspect of the importance and power of athletes speaking out against police violence, wearing the “I Can’t Breathe” shirts and raising their hands high in front of the cameras. It forces people—white people to be specific—who are not on Twitter, who don’t engage with politics, and who in our deeply segregated society only actually “see” and acknowledge black and brown people on television, to confront a distinctly different set of life experiences. It also speaks to why black and brown athletes have historically always been policed by the media and sports owners for their political statements. It’s not the power of their words as much as the power of their reach.

The great Indian writer Arundhati Roy once said, “…in the midst of putative peace, you could, like me, be unfortunate enough to stumble on a silent war. The trouble is that once you see it, you can’t unsee it. And once you’ve seen it, keeping quiet, saying nothing, becomes as political an act as speaking out. There’s no innocence. Either way, you’re accountable.” Frank, in his 30s, has lost his innocence and is starting to feel accountable for the state of this world and the kind of existence he is prepared to hand over to his children. He has asked me what he can do, where he can give money and how, as a white person, he can offer the kind of solidarity that would actually make a difference. I tell this story so people who may already be part of the movement can see the power of bringing this movement into athletic spaces. We need to keep offering support and solidarity to any athlete who stands with this struggle and says, in the words of Rams wide receiver Kenny Britt, “My kids’ lives matter.” We also need to keep marching and doing die-ins in front of basketball arenas on NBA game day, as has happened in DC, Brooklyn and Portland, among other places. Bring this movement to fans. Force people to reckon with worlds that they do not inhabit. We won’t reach everyone. Some will respond with the ugliest possible reaction for daring to invade on their sacred sporting space. But some will also actually “hear” for the first time in their lives. By breaching the walls of the sports world, we can puncture the ultimate privilege in our society: the privilege of blissful ignorance.