Marx and Nature A Red and Green Perspective

Essential reading for ecosocialists. Paul Burkett shows that humanity's relationship to nature is central to Marx's critique of capitalism and vision of socialism. 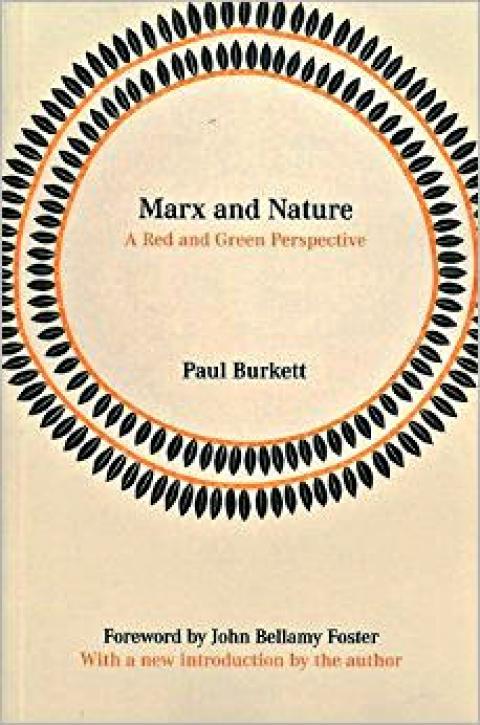 Marx and Nature A Red and Green Perspective by Paul Burkett Haymarket Books, 2014

Marx and Nature is a challenging, but very important book for all those concerned with developing and acting on the ecological insights in Marxist theory. Its republication is long over-due, but should offer new readers the opportunity to grapple with Paul Burketts analysis, and build on the ideas here. It has a new foreword by John Bellamy Foster which locates the book in the wider debates that have arisen among Marxist thinkers since its publication.

In Marx and Nature, Paul Burkett takes up a number of arguments that are made regarding Marxs ecological thinking. A common criticism, that Marxism is Promethean in its vision of the development of the forces of production is challenged very effectively here. Burkett notes though, it is not just anti-Marxists who make this criticism, but it also occurs from among Marxists too. Burkett quotes Michael Lowy for instance, suggesting that

There is a tendency in Marx to consider the development of the forces of production as the principal vector of progress, to adopt a fairly uncritical attitude toward industrial civilization particularly its destructive relationship to nature.

Burkett effectively challenges this view through the book. He does this by returning to the very core of Marxs ideas, and showing how, at almost every stage of Marxs intellectual development, the question of human relationships to nature is key.

The first part of this is a recognition that Marx treats society and nature in terms of historically specific class-differentiated relations between people and necessary conditions of human production. In other words, the relationships that exist between humans and nature, that are essential to the continued existence of society, vary through history. But with the development of capitalism, this relationship takes a particularly unusual form.

The commodity, value, and capital, for example, become dominant forms of human production only with capitalisms extreme social separation of the direct human producers from necessary conditions of production.

Burkett points out though, that this analysis isnt limited to hitherto existing societies, but extends to Marxs vision of the new productive forces developed under communism.

An absolutely central part of this, for Marx, Burkett explains, is the role played by nature in the production process. For Marx, both nature and labor contribute to the production of wealth or use-values Labor can only produce wealth by effecting exchange of matter between man and Nature. [Burkett quotes here from Marxs 1861-1863 Economic Manuscript].

All Marx suggests is that the significance of unappropriated natural wealth as potential use value hinges on its eventual combination with human labor, even if this is only the labor of primary appropriation.

The fewer the number of natural wants imperatively calling for satisfaction, and the greater the natural fertility of the soil and the favorableness of the climate, so much less is the labor-time necessary for the maintenance and reproduction of the producer. [Marx Capital I]

The strength of Marxs argument helps explain another common criticism of Marx, which is that he viewed Nature as somehow unlimited, particularly his use of the phrase free appropriation. Burkett explains that here, Marx is not talking as though Nature is somehow a free gift to humans, but he is explaining it in terms of the production process, Burkett writes:

when Marx speaks of capitals free appropriation of natural and social conditions, this is not meant to imply that such conditions are costless or infinite from a total, society-wider standpoint. Rather, capitalistic free appropriation only means that no wage labor is required to produce certain conditions serving as material or social vehicles of value production and accumulation. Thus free appropriation certainly does not imply that the conditions being appropriated have no opportunity cost or alternative use from a social point of view That something can be freely appropriated in the sense that it is directly or spontaneously provided by nature as Marx puts it, in no way implies that it is not scarce or valuable from a social (and farsighted) perspective.

Nor did Marx ignore the potential for environmental crisis. In fact, Burkett argues, Marx considers two types of such crises. The first are crises caused by imbalances between capitals material requirements and the natural conditions of raw materials production, and, secondly, perhaps more pertinently to current environmental problems, what Burkett describes as a more general crisis in the quality of human-social development stemming from the disturbances in the circulation of matter and life forces that are generated by capitalisms industrial division of town and country.

Thus for Marx, the centrality of nature to the productive process lays the potential roots for both economic crisis and wider environmental crisis. I was less convinced of Burketts location of natural shortages as one cause of economic crisis, as I was by the fact that the very nature of capitalism, based on the accumulation of wealth for the sake of accumulation, leads to unrestricted environmental degradation. The separation of town and country, the historic development of a system which seeks to relocate natural resources in the production of commodities for exchange, was for Marx and Engels a key explanation of the roots of environmental crisis under capitalism. The undermining of that separation was also a key part of their vision for a sustainable economy that would see the rational control of human metabolism of nature as a central part of production.

There is much else of interest here. I was particularly taken by Burketts discussion of Marxs Working-Day Analysis in which he shows how the objectification of nature, also leads to the destruction of human individuality and creativity. In examining how Marx considered issues such as the struggle for the ten-hour day, Burkett concludes:

Marx does insist that significant progress towards a sustainable utilization of societys life-forces and the use of such progress as a launching pad for further struggles depend on the incursion of explicitly social decision-making into areas previously reserved for capital and the market. This imperative for general political action stems from the fact that capital requires the forces of human and extra-human nature only as conditions of monetary accumulation, whereas workers, life society as a whole, obviously have a more holistic interest in natural conditions as conditions of present and future human development.

The conclusions of Burketts analysis is the put the working class back at the heart of radical change. This is particularly important because it is this class that has the power to create a sustainable society, precisely because it is their control and organisation of production which will lead to a human interaction with nature that is both sustainable and in the best interest of the long-term development of humans.

Environmental critics of Marx (particularly those from the left) often seem to have wished that Marx had talked more about nature or at least considered the natural impact of society more generally. Burkett shows that both Marx and Engels did precisely this, but not in the easily accessible way that some people seem to want. In fact, the ecological core to Marx and Engels thinking is of much greater significance than some might have thought. That Marx and Engels were products of their time is a truism  they could not have foreseen climate change, for instance. Though they did understand that a fully developed world capitalism might make fundamental changes to the planets environment.

What Burkett has done is to show that nature is a fundamental part of Marxs nuanced and detailed critique of capitalism and his vision for a better world. Marx and Nature is not an easy book  readers will need some familiarity with Marxs works and ideas  but it repays reading. In a time when many are critiquing capitalisms relationship with the environment, but few are offering a revolutionary alternative, Marx and Nature, shows the necessity for a Marxist understanding of the world to be part of the struggle for a sustainable world.

UK-based Martin Empson is the author of Marxism and Ecology; Capitalism, Socialism and the Future of the Planet. He wrote this review for his blog, Resolute Reader.