In the wake of the tragedy, many publications across the West have rushed to print reproductions of Charlie Hebdo covers as proof that terrorist violence cannot dampen free expression. Such homage to the magazine in its agony is in one sense fitting and proper, but in another sense it is the precise opposite of what the living Charlie was about. 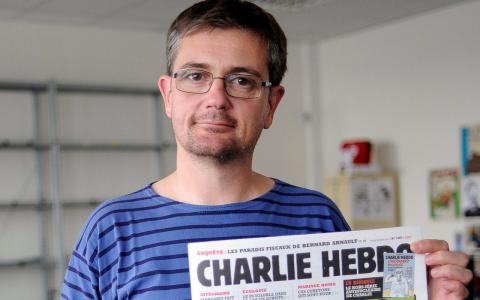 Stéphane Charbonnier, who used the pen name Charb, the publishing director of the French satirical newspaper Charlie Hebdo, in Paris in 2012. He was one of 12 people killed in an attack at the paper’s offices on Jan. 7, 2015.,

Like every decent human being, I am aghast at the slaughter that occurred today at the Paris offices of the French satirical magazine Charlie Hebdo. We do not yet know for certain who is responsible for the massacre of 12 people, although the attackers reportedly stated that “the prophet is avenged,” suggesting that responsibility lies with an Islamic extremist group. In any case, we can be sure that it was one of the many satirical images published by the magazine that led to the attack. For Charlie Hebdo was in the business of giving offense, and it tried hard to offend everyone — right and left, Protestant and Catholic, Muslim and Jew, male and female, Western and non-Western. It was, if you’ll pardon the expression, an equal opportunity offender, and it reveled in its freedom to vex, irritate and derange.

If the magazine’s omnidirectional impudence had been limited to words, it probably would not have ended in a bloodbath. Language creates boundaries that words cannot transcend, even with the help of translators. Images, however, can cross linguistic boundaries as if they did not exist. Images are immediate, their effect is visceral, and as the journalist Jeet Heer reminds us, they move rapidly. The artists at Charlie Hebdo made no effort to blunt their impact or to convey the full historical context out of which their imagery grew.

There is an old Parisian tradition of cheeky humor that respects nothing and no one. The French even have a word for it: “gouaille.” Think of obscene images of Marie-Antoinette and other royals, of priests in flagrante delicto with nuns, of devils farting in the pope's face and Daumier’s caricatures of King Louis-Philippe, whom he portrayed in the shape of a pear. It's an anarchic populist form of obscenity that aims to cut down anything that would erect itself as venerable, sacred or powerful. Such satirical humor has little in common with the kind of witty political satire with which Americans are familiar today through watching Jon Stewart or John Oliver. While not apolitical (attacks on Marie-Antoinette surely had a political valence), gouaille does not seek to stake out a political position or mock one political party to the benefit of another. It is directed, rather, against authority in general, against hierarchy and against the presumption that any individual or group has exclusive possession of the truth.

The satire that Charlie Hebdo exemplified was more blasphemous than political, and its roots lie deep in European history, dating from a time when in order to challenge authority, one had to confront divinity itself. In that one respect, the fanatics are not wrong: Charlie Hebdo was out to undermine the sacred as such.

The essence of Charlie Hebdo was to express the inexpressible in images with the power to shock and offend.

In the wake of the tragedy, many publications across the West have rushed to print reproductions of Charlie Hebdo covers as proof that terrorist violence cannot dampen free expression. Such homage to the magazine in its agony is in one sense fitting and proper, but in another sense it is the precise opposite of what the living Charlie was about.

Reproducing the imagery created by the murdered artists tends to sacralize them as embodiments of some abstract ideal of free speech. But many of the publications that today honor the dead as martyrs would yesterday have rejected their work as tasteless and obscene, as indeed it often was. The whole point of Charlie’s satire was to be tasteless and obscene, to respect no proprieties, to make its point by being untameable and incorrigible and therefore unpublishable anywhere else. The speech it exemplified was not free to express itself anywhere but in its pages. Its spirit was insurrectionist and anti-idealist, and its creators would be dumbfounded to find themselves memorialized as exemplars of a freedom that they always insisted was perpetually in danger and in need of a defense that only offensiveness could provide. To transform the shock of Charlie’s obscenities into veneration of its martyrdom is to turn the magazine into the kind of icon against which its irrepressible iconoclasm was directed. But as the poet Stéphane Mallarmé wrote of Edgar Allan Poe, death has a way of revealing the essence of things — and the essence of Charlie Hebdo was to express the inexpressible in images with the power to shock and offend.

In one of those dark ironies with which history is abundantly provided, the day of the Charlie Hebdo massacre is also the publication day of a new novel by one of France’s most widely read novelists, Michel Houellebecq. The book is titled “Soumission” (“Submission”), which is a French translation of “Islam.” In it, the writer imagines France in 2022 on the brink of “a civil war between its Muslim immigrants and its native population.” And as it happens, Charlie Hebdo’s most recent cover features a caricature of Houellebecq imagining himself celebrating Ramadan in 2015. The image mocks the writer, whose verbal conjuring with impending civil war is a satire in the same gouaille tradition as Charlie Hebdo — crude, exaggerated, preposterous, revolting and yet a sign of tensions and turmoil that cannot be confronted as long as they remain unseen.

Arthur Goldhammer is is a translator, writer and affiliate of the Center for European Studies at Harvard University. He has translated more than 125 books from the French. He is also the author of a novel, "Shooting War," and a blog on French politics.