What Would Martin Say?

King saw the goal of education as more than performance on high-stakes tests or the acquisition of job skills or career competencies. “To save man from the morass of propaganda,” King opined, “is one of the chief aims of education. Education must enable one to sift and weigh evidence, to discern the true from the false, the real from the unreal, and the facts from the fiction.” The notion that privatization can foster equality is fiction. 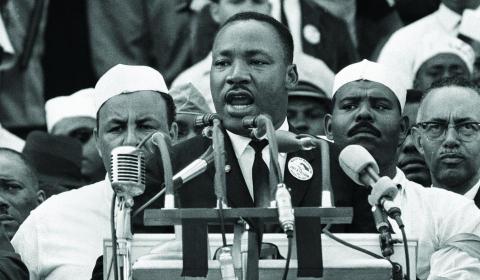 This year marked the fiftieth anniversary of Mississippi Freedom Summer and the passage of the Civil Rights Act of 1964, one of the most important pieces of civil rights legislation in US history. It also has marked a renewed push by the proponents of corporate education reform to dismantle public education in what they persist in referring to as the great “civil rights issue of our time.” The leaders of this effort, including US Secretary of Education Arne Duncan, are fond of appropriating the language of the civil rights movement to justify their anti-union, anti-teacher, pro-testing privatization agenda. But they are not social justice advocates. And Arne Duncan is no Reverend King.

In a 2010 speech observing the forty-fifth anniversary of the Selma to Montgomery March, Duncan boldly invoked the words of John Kennedy: “Simple justice requires that public funds . . . not be spent in any fashion which encourages, subsidizes, or results in racial discrimination.” Duncan enjoined those in attendance, “Let me repeat that, President Kennedy said that no taxpayer dollars should be spent if they subsidize or result in racial discrimination.” Yet Duncan and the Obama Administration—through Race to the Top, a program similar to the Bush Administration’s No Child Left Behind—have pursued policies that exacerbate segregation and racial inequality.

In a 2010 interview with then-chancellor of the New York City Department of Education Joel Klein, Duncan went even further, invoking the name of Martin Luther King to justify attacks on public schools. Dr. King “explained in his powerful Letter from Birmingham Jail why the civil rights movement could not wait,” said Duncan. “America today cannot wait to transform education. We’ve been far too complacent and too passive. We have perpetuated poverty and social failure for far too long. The need is urgent and the time for change is now.”

But there is plenty of evidence that King would never have endorsed corporate education reform or privatization. Consider how King defined the role of education.

While still an undergraduate at Morehouse College in Atlanta in 1947, King said: “I too often find that most college men have a misconception of the purpose of education.” They “think that education should equip them with the proper instruments of exploitation so that they can forever trample over the masses.” He continued: “Still others think that education should furnish them with noble ends rather than means to an end.”

Here, King plainly laid out two visions of education that continue to war against each other. While he acknowledged the importance of an education in preparing persons for the workforce, enabling “man to become more efficient, to achieve with increasing facility the legitimate goals of his life,” he also saw a much deeper purpose.

“We must remember,” King warned, “that intelligence is not enough . . . Intelligence plus character—that is the goal of true education.” He asserted, “The complete education gives one not only power of concentration, but worthy objectives upon which to concentrate.”

King saw the goal of education as more than performance on high-stakes tests or the acquisition of job skills or career competencies. He saw it as the cornerstone of free thought and the use of knowledge in the public interest. For King, the lofty goal of education was not just to make a living but also to make the world a better place by using that production of knowledge for good. “To save man from the morass of propaganda,”  King opined, “is one of the chief aims of education. Education must enable one to sift and weigh evidence, to discern the true from the false, the real from the unreal, and the facts from the fiction.” The notion that privatization can foster equality is fiction.

King was born into a world in which privatization was the enemy of equality. In the 1930s, for instance, the NAACP struggled against agents of the Democratic Party in many southern states that tried to define it as a private club; they cut off avenues to full political participation through vehicles like the white primary. Poll taxes and literacy tests were also still employed in many locations to deny African Americans political participation. It is hard to imagine King under any circumstances endorsing either testing or privatization as the means of ensuring equality.

In fact, King by implication strongly rebuked the privatizers in his observations regarding Senator Eugene Talmadge, the notorious segregationist governor of his home state of Georgia.

Talmadge, King observed, “possessed one of the better minds of Georgia, or even America,” and “wore the Phi Beta Kappa key.” King reflected, “By all measuring rods, Mr. Talmadge could think critically and intensively; yet he contends that I am an inferior being. Are those the types of men we call educated?”

The same could be said at present for the cadre of corporate education reformers touting Ivy League degrees and billion-dollar bank accounts without an ounce of empathy for those harmed by their efforts. Like Talmadge, they fail to see beyond the narrow confines of their own self-interest the inherently dangerous and corrosive impact their policies are having not only on the nation’s youth but also the foundations of American democracy. When Arne Duncan suggests, for instance, as he did in a speech at a Brooklyn charter school in 2009, that based on high-stakes testing, “we should be able to look every second grader in the eye and say, ‘You’re on track, you’re going to be able to go to a good college, or you’re not,’ ” there is a serious problem. In neglecting to address how the nation would deal with the so-called failures on these high-stakes tests, he is not only betraying the movement but the very function of education as King imagined it.

King would never have endorsed high-stakes testing. “The function of education,” he explained in 1947, “is to teach one to think intensively and to think critically.” Furthermore, he never would have supported any individual or group that promoted a view of education simply as a means of ensuring job efficiency without human compassion. Education that “stops with efficiency,” he warned, “may prove the greatest menace to society. The most dangerous criminal may be the man gifted with reason, but with no morals.”

King saw how school privatization was used to maintain segregation in Georgia. He witnessed the insidious efforts of Eugene Talmadge’s son, Herman, a distinguished lawyer, who succeeded his father in the governor’s office. Herman Talmadge created what became known as the “private-school plan.” In 1953, before the Supreme Court’s ruling in Brown v. Board of Education, Talmadge proposed an amendment to the Georgia Constitution to empower the general assembly to privatize the state’s public education system. “We can maintain separate schools regardless of the US Supreme Court,” Talmadge advised his colleagues, “by reverting to a private system, subsidizing the child rather than the political subdivision.” The plan was simple. If the Supreme Court decided, as it eventually did in Brown, to mandate desegregation, the state would close the schools and issue vouchers to allowing students to enroll in segregated private schools.

What we are seeing in the name of “reform” today is the same plan with slight modifications: brand schools as low-performing factories of failure, encourage privatization, and leave the vast majority of students in underfunded, highly stigmatized public schools.

This effort will create an America that looks more like the 1967 Kerner Commission’s forecast, two societies separate and unequal, than Martin Luther King’s Beloved Community.

For King, the Beloved Community was a global vision of human cooperation and understanding where all peoples could share in the abundant resources of the planet. He believed that universal standards of human decency could be used to challenge the existence of poverty, famine, and economic displacement in all of its forms. A celebration of achievement and an appreciation of fraternity would blot out racism, discrimination, and distinctions of any kind that sought to divide rather than elevate people—no matter what race, religion, or test score. The Beloved Community promoted international cooperation over competition. The goal of education should be not to measure our progress against the world but to harness our combined intelligence to triumph over the great social, scientific, humanistic, and environmental issues of our time.

While it seeks to claim the mantle of the movement and Dr. King’s legacy, corporate education reform is rooted in fear, fired by competition and driven by division. It seeks to undermine community rather than build it and, for this reason, it is the ultimate betrayal of the goals and values of the movement.

Real triumph over educational inequalities can only come from a deeper investment in our schools and communities and a true commitment to tackling poverty, segregation, and issues affecting students with special needs and bilingual education. The Beloved Community is to be found not in the segregated citadels of private schools but in a well-funded system of public education, free and open to all—affirming our commitment to democracy and justice and our commitment to the dignity and worth of our greatest resource, our youth.

Yohuru Williams is an education activist and professor of history at Fairfield University in Fairfield, Connecticut. He is the author, editor, or co-editor of several books, including Black Politics/White Power: Civil Rights Black Power and Black Panthers in New Haven (Blackwell, 2006), Teaching Beyond the Textbook: Six Investigative Strategies (Corwin Press, 2008), and Liberated Territory: Toward a Local History of the Black Panther Party (Duke, 2008). He also served as general editor for the Association for the Study of African American Life and History’s 2002 and 2003 Black History Month publications, The Color Line Revisited (Tapestry Press, 2002) and The Souls of Black Folks: Centennial Reflections (Africa World Press, 2003).