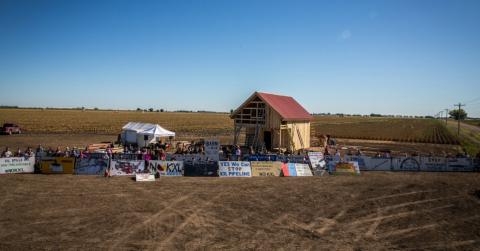 Nebraska ranchers and farmers are building a renewable energy powered barn in the path of the Keystone XL pipeline.,Mary Anne Andrei-Bold Nebraska/flickr/cc

As Canadian energy company TransCanada filed eminent domain claims against Nebraska landowners on Tuesday for the construction of the controversial Keystone XL tar sands pipeline, families whose properties are on the verge of forced seizure say they will do whatever is necessary to shut down the project.

"Today, Nebraska families are facing an inconceivable moment when land that has been in their hands for generations is being taken away from them by a foreign oil company," Bold Nebraska director Jane Kleeb stated in a press release. "Landowners will match TransCanada’s lawsuits in local courts and continue to take our fight to the one person who can put an end to all of this: President Obama."

Obama has promised to veto legislation that would force the approval of the Keystone XL pipeline; Senate Republicans have vowed to get the pipeline approved as one of their first acts of 2015.

TransCanada's use of the "unconstitutional and void" eminent domain law, which gives the government the right to seize private lands for public use without compensation, is "another bullying move by the foreign corporation that swears they are going to be a good neighbor," said Jim Tarnick, one of the landowners who joined in the suit.

"From the Kalamazoo to the Yellowstone rivers and all across the United States, tar sands are a horrible danger and threat that the President must reject," Tarnick added.

Bold Nebraska noted that public support for the Keystone XL pipeline has waned over time, with only 41 percent approving of the project in a recent poll.

Yet while landowners, the president, and the public at large continue to speak out against the pipeline, former Nebraska Governor Dave Heineman, who approved Keystone construction in the state, "abus[ed] the powers of his office" by taking authority away from the people of Nebraska and giving it to himself "to approve a pipeline and give a foreign corporation the power of eminent domain before they have all their permits in place," the lawsuit states.

"While we fight to ensure TransCanada and the state of Nebraska do not run roughshod over farmers and ranchers, we also call upon President Obama to reject Keystone XL now," Kleeb said last week.

Meghan Hammond, a landowner whose clean energy project would have to be torn down for the construction of the pipeline, stated on Tuesday: "We can not survive as a family business without clean water. Our government has no solution to clean up tar sands and benzene from our water. Our land is not for sale and we will keep fighting TransCanada until we see their tail lights go back across our border."