The U.S. Nuclear Regulatory Commission (NRC) issued a Director’s Decision Friday rejecting an appeal by environmental watchdog groups to suspend operations at the nearly two dozen reactors in the United States that have the same containment system as the ill-fated Fukushima nuclear reactors in Japan. Greenpeace charges the NRC is “backing off post-Fukushima fixes at reactors around the country due to fear that added regulatory costs would topple more nuclear plants." 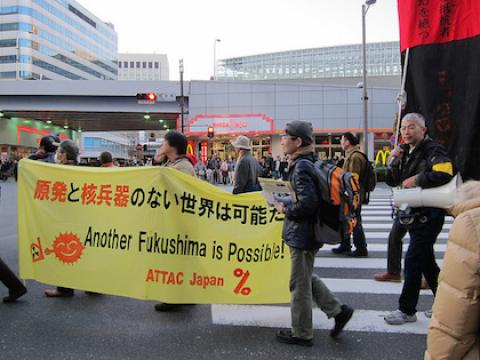 The U.S. Nuclear Regulatory Commission has rejected an appeal to halt operations at the nearly two dozen reactors in the nation that have the same containment system as those at the ill-fated Fukushima Daiichi nuclear reactors.

The decision was posted (pdf) in the Federal Register on Friday.

Watchdog group Beyond Nuclear filed the appeal in April, 2011 in the wake of the Fukushima disaster, charging that the then-21 Mark 1 design General Electric Boiling Water Reactors were "accidents waiting to happen."

The filing (pdf) sought emergency enforcement action to protect the public from the "unreliability of [the design's] containment system to mitigate a severe accident and the lack of emergency power systems to cool high density storage pools each containing hundreds of tons thermally hot and extremely radioactive used reactor fuel assemblies located atop the reactor building s and outside a rated containment."

The suspension is necessary "in response to the dramatic and ongoing failure of similarly designed and constructed GE Boiling Water Reactors systems, structures and components at one or more units at the Fukushima Daiichi nuclear power plant in Fukushima, Japan," the group wrote.

In response to the decision posted Friday, Beyond Nuclear stated that though it acknowledges that "a portion of the actions that we requested in April 2011 have been taken at some of these reactors," it says it rejects the NRC decision that the issues raised have been resolved.

Paul Gunter, Director of Reactor Oversight at Beyond Nuclear and the person who initiated and submitted the petition, called the efforts taken so far to address the issues are "inadequate half measures that need not be fully implemented for years to come, if ever."

"In critical safety areas for the Mark I containment vulnerability, the proposed corrective actions credited in the [NR] Director’s Decision are not even conceptually finalized or approved by the regulator. Moreover, there are significant agency staff non-concurrences on how to proceed with post-Fukushima action plans," Gunter concluded.

Jim Riccio, Greenpeace’s Nuclear Policy Analyst, wrote last month that "despite the efforts of green groups to ensure that the lessons of Fukushima have been learned by the nuclear industry and their regulators, the U.S. Nuclear Regulatory Commission (NRC) is backing off post Fukushima fixes at reactors around the country due to fear that added regulatory costs would topple more nuclear plants."

Beyond Nuclear adds that its continued concerns are based in part on a "nuclear industry that first considers its financial margins over public safety margins."

[Andrea Germanos is a staff writer at Common Dreams. This work is licensed under a Creative Commons Attribution-Share Alike 3.0 License.]