Black Girls Matter: Pushed Out, Overpoliced and Underprotected is a new report by the African American Policy Forum and Columbia Law School’s Center for Intersectionality and Social Policy Studies. The report is based on a new review of national data and personal interviews with young women in Boston and New York. 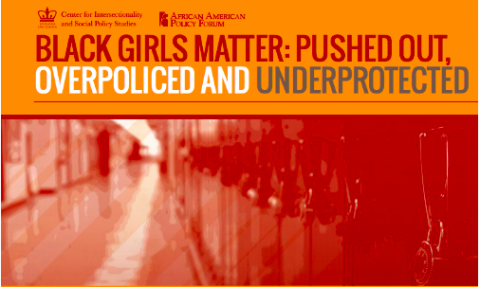 Girls of color face much harsher school discipline than their white peers but are excluded from current efforts to address the school-to-prison pipeline, according to a new report issued today by the African American Policy Forum and Columbia Law School’s Center for Intersectionality and Social Policy Studies.

The report, Black Girls Matter: Pushed Out, Overpoliced and Underprotected, is based on a new review of national data and personal interviews with young women in Boston and New York. Read a copy of that report here.

“As public concern mounts for the needs of men and boys of color through initiatives like the White House’s My Brother’s Keeper, we must challenge the assumption that the lives of girls and women—who are often left out of the national conversation—are not also at risk,” said Kimberlé Crenshaw, the report’s lead author.

Crenshaw, a leading authority in how law and society are shaped by race and gender, argues that an intersectional approach encompassing how related identity categories such as race, gender, and class overlap to create inequality on multiple levels is necessary to address the issue of school discipline and the school-to-prison pipeline.

The study cites several examples of excessive disciplinary actions against young black girls, including the controversial 2014 case of a 12-year-old in Georgia who faced expulsion and criminal charges for writing the word “hi” on a locker room wall.  A whitefemale classmate who was also involved faced a much less severe punishment.

According to the most recent data from the U.S. Department of Education cited in the report, nationally black girls were suspended six times more than white girls, while black boys were suspended three times as often as white boys.

●      Rates of expulsion were even more strikingly disproportionate between black and white students, especially among girls.

The report recommends policies and interventions to address challenges facing girls of color, including revising policies that funnel girls into juvenile supervision facilities; developing programs that identify signs of sexual victimization and assist girls in addressing traumatic experiences; advancing programs that support girls who are pregnant, parenting, or otherwise assuming significant familial responsibilities; and improving data collection to better track discipline and achievement by race/ethnicity and gender for all groups.