"Of all the people to hurt with sanctions, punishing students and undermining educational exchanges is a particularly damaging act," said Trita Parsi, president of the National Iranian-American Council. 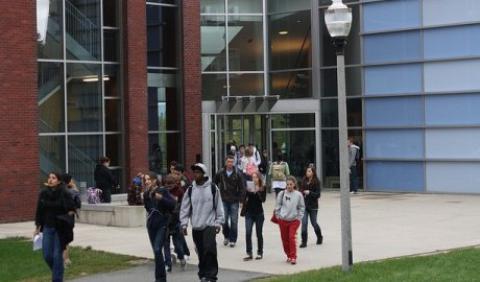 A new decision by the Graduate College University of Massachusetts at Amherst to restrict Iranian students from key graduate programs—including physics, microbiology, and chemistry—is being blasted by civil rights advocates and members of the campus community as a violation of academic freedom, educational equality, and the principle of non-discrimination.

"Of all the people to hurt with sanctions, punishing students and undermining educational exchanges is a particularly damaging act," said Trita Parsi, president of the National Iranian-American Council.

The Umass Graduate School claimed on February 6th that it has imposed the ban to comply with a sanctions law — the "Iran Threat Reduction and Syria Human Rights Act of 2012." The rule allows the Secretary of State to block visas and Department of Homeland Security to deny entry to Iranian nationals seeking to study at a higher educational institution for the purpose of preparing for "a career in the energy sector of Iran or in nuclear science or nuclear engineering or a related field in Iran."

The new ban by the university will bar Iranian nationals from enrolling in a host of programs, including Chemical Engineering, Electrical and Computer Engineering, Mechanical and Industrial Engineering, Physics, Chemistry, Microbiology, and Polymer Science and Engineering.

"In addition," the announcement continues, "all enrolled Iranian national students will be required to acknowledge the restrictions imposed by the 2012 sanctions and certify their compliance in writing."

According to The Boston Globe:

The UMass policy was formalized and published online after an inquiry by an Iranian student. The university’s goal was to clarify the rules and protect students, faculty, and fund sources from disruptions to research caused when current students are delayed or prevented from reentering the country because of visa issues, said Mike Malone, UMass’s vice chancellor for research and engagement.

He said such a situation arose with an Iranian student in the past two months.

"We don’t like it," Malone said. "We’d rather have free access, but we consulted with the law and with outside counsel on this."

However, analysts say that Umass is not merely following the letter of the law, but rather, taking the law into its own hands, because the 2012 rule tasks the government—not educational institutions—with enforcement.

"The University of Massachusetts Amherst's decision to self-enforce U.S. visa restrictions above and beyond the terms of the law is harmful and counterproductive," wrote Jamal Abdi, policy director for NIAC, in an open letter to John McCarthy, the dean of the Graduate School. "While there is no law to justify creating a second barrier of sanctions enforcement at the university level, there are laws and constitutional protections in place to prevent discrimination on the basis of national origin against persons under U.S. jurisdiction."

An unnamed U.S. State Department official, interviewed by the Boston Globe, appeared to verify Abdi's argument. "U.S. law does not prohibit qualified Iranian nationals coming to the United States for education in science and engineering," the source stated.

Regardless of U.S. sanctions laws, which have themselves been slammed as inhumane, members of the campus community say the prohibition violates the most basic rights of students.

A Facebook Page opposing the ban—which has already garnered over 2,000 "likes"—slams the new rule as "collective punishment."

"The Iranian community in Amherst is feeling betrayed, excluded, and threatened, which potentially can affect their academic contribution," the page declares.

Many have taken their concerns to Twitter under the hashtag #weareallumass.

Furthermore, Emery Berger, Umass professor in Computer Science and chair of Graduate admissions, took to Twitter to signal his dissent from the new rule.

However, critics say that the partial ban at Umass—with an undergraduate and graduate student body numbering more than 23,000—sets a dangerous precedent for educational institutions nation-wide.

"More than 10,000 students from Iran came to the U.S. during the 2013-2014 academic year, making Iran the twelfth highest leading place of origin for international students studying in the United States," the Public Affairs Alliance of Iranian Americans stated Friday. "The vast majority of these students are in the STEM fields (science, technology, engineering, mathematics)."