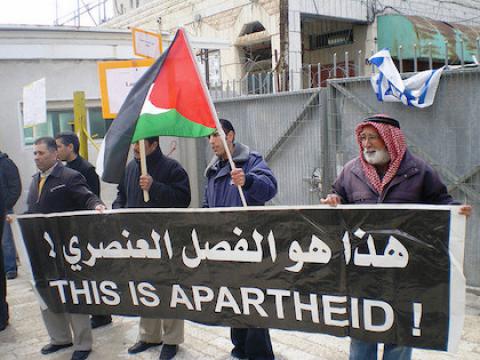 A Land Day demonstration in Hebron. Land Day is the annual commemoration of the first mass mobilization by Palestinians within Israel against settlement expansion and land theft on March 30, 1976. ,ISM Palestine/Al-Khalil

The Israeli group said the construction of 3,100 “residential units” began last year in illegal West Bank settlements, while 4,485 tenders for construction there and in annexed East Jerusalem settlement districts were launched in 2014 — “a record high for at least a decade.”

Of the 3,100 units, 287 were in so-called wildcat settlements without official authorization from Israeli authorities, Peace Now said.

The international community draws no distinction between what Israel calls “legal” and “illegal” settlements, considering all those built on occupied Palestinian territory to be a violation of international law.

It said that over the same period 66 construction projects were launched to build 10,113 homes in 41 settlements.

“All these figures prove that Benjamin Netanyahu is doing everything to increase faits accomplis on the ground and make a two-state solution impossible,” Peace Now’s Hagit Ofran said.

“We hope Israeli voters will take this essential fact into account” when they go back to the polls on March 17, she said.

Peace Now said the homes were to be built in four existing settlements across the West Bank.

More than 600,000 Israeli settlers, soaring from 189,000 in 1989, live in settlements across the West Bank and occupied East Jerusalem, in contravention of international law.

Israeli settlers act without approval to expand settlements or create new ones in the West Bank, building outposts that are illegal even by the Israeli authorities’ standards.

In most cases these settlement outposts are then “legalized” by Israel, and in rare cases they are dismantled.

Meanwhile, Palestinians are rarely granted permission to build in the 60 percent of the West Bank under full Israeli military control, or in annexed East Jerusalem.

Israeli authorities have also allowed Zionist settlers to take over homes in Palestinian neighborhoods both in annexed East Jerusalem and the West Bank.

The roots of the Israel-Palestine conflict date back to 1917, when the British government, in the now-infamous Balfour Declaration, called for “the establishment in Palestine of a national home for the Jewish people.”

Jewish immigration rose considerably under the British administration of Palestine, which was consolidated by a League of Nations “mandate” in 1922.

In 1948, with the end of the mandate, a new state — Israel — was declared inside historical Palestine.

As a result, some 700,000 Palestinians fled their homes, or were forcibly expelled, while hundreds of Palestinian villages and cities were razed to the ground by invading Zionist forces.

The Palestinian diaspora has since become one of the largest in the world. Palestinian refugees are currently spread across the region and in other countries, while many have settled in refugee camps in the Palestinian West Bank and Gaza Strip.

Israel then occupied East Jerusalem and the West Bank during the 1967 Middle East War. It later annexed the holy city in 1980, claiming it as the capital of the self-proclaimed Zionist state — a move never recognized by the international community.

[Al-Akhbar English is licensed under a Creative Commons Attribution-NonCommercial-NoDerivs 3.0.]