Five years in the ACA still primarily serves as a huge government marketing campaign for private insurance companies, funneling millions of new customers with few if any restrictions on ever-escalating prices. The ACA built upon the flaws of our market-based system and, quite predictably, is failing to contain costs and provide broad access to affordable, quality health care. Corporate interests still trump the common good in U.S. 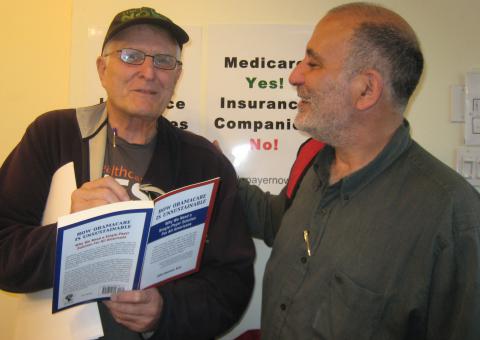 Hard to believe it's been five years since Congress passed the Affordable Care Act (ACA) on March 23, 2010. The bloviating, vein-popping right-wing still goes ballistic at mere mention of the word Obamacare.

Still, putting aside their senseless distortions and diatribes, not too many of us have cause for celebration except perhaps the top brass from the 1300 or so private health insurers who are raking in enormous profits - health care stocks soared by almost 40 percent in 2013, the highest of any sector in the S&P 500.

Nonetheless, as a reminder, the controversial law does contain some important positives for regular folks. For example, it guarantees coverage for everyone without tacking on higher premiums because of pre-existing medical conditions and it requires annual free preventive-care health checks for those on Medicare.

But, five years in, as critics continue to emphasize, ACA still primarily serves as a huge government marketing campaign for private insurance companies, funneling millions of new customers with few if any restrictions on ever-escalating prices.

"The ACA built upon the flaws of our market-based system and, quite predictably, is failing to contain costs and provide broad access to affordable, quality health care. Corporate interests still trump the common good in U.S. health care," according to a five-year ACA assessment appearing in the Feb. 10, 2015 International Journal of Health Services, authored by M.D. John P. Geyman.

Dr. Geyman is not alone. Other very prominent scholars and caregivers agree that ACA's reliance on private insurers is its downfall.

For example, the developer of the cardiac defibrillator, Dr. Bernard Lown, completely dismisses their role in providing quality care for the simple fact that "like all businesses, their goal is to make money."

Get What You Pay For & Nothing More

In essence, we still only get the care we can afford depending on which of the thousands of plans we subscribe. Ability to pay is still the big problem.

As a result, medical bills remain the number one reason for personal bankruptcy even though most of the petitioners have health insurance. For the rest of us, it's not much better.

Shockingly, roughly 40 percent of Americans have trouble paying medical bills as noted (on pg. 44) by an extremely detailed 2011 National Scorecard on U.S. Health System Performance commissioned by the Commonwealth Fund.

And, though many have found policies with affordable premiums, the report also indicated that adults are likelier than those in other developed countries to forgo care because of cost.

The statistics are alarming.

In the past five years, according to a thorough 2015 Bloomberg review I will cite extensively, the average price to see a primary care doctor has risen 20 percent. For a specialist it's gone up 29 percent and for outpatient surgery it's up 43 percent.

No wonder, the article explains, 22 percent of people now say the cost of getting care has led them to delay treatment for a serious condition. That's the highest percentage since Gallup started asking in 2001. Another poll cited found as many as 16 million adults with chronic conditions have avoided the doctor because of out-of-pocket costs.

The Problem in a Nutshell

SinglePayer Now! San Francisco organizer Don Bechler, described to me that the multiplicity and complexity of insurance plans are largely designed as "marketing lures to hook more customers." Plans are tweaked, individualized and adjusted for the particular amount of up-front money each business is willing to put up for employees.

Thus, Bechler explained, to seal the deal and keep premiums coming in, insurers set up a multitude of corporate plans that impose a wide variety of burdens on employees for premium-cost sharing, co-payments and deductibles.

Figuring out the billing for each patient, for each physician and for each care facility among the tremendous diversity of plans, Bechler added, "becomes a nightmare fraught with delays and confusion."

This was confirmed by a recent study of private insurance Medicare Advantage programs that discovered patients were overcharged around half the time.

So, it's clear, the bloated bureaucracy that is crippling our healthcare resides in the private sector, not in government.

In addition, the complexity of plans, each with its own marketing, paperwork, enrollment, premiums, rules and regulations, also contributes to an enormous administrative cost overhead.

I spoke about this with James G. Kahn, M.D., MPH, who is a researcher at the Philip R. Lee Institute of Health Policy at the Univ. of Cal., SF, and senior author of a recent study analyzing grotesquely excessive administrative costs of insurance companies and how it diverts several hundred billions of dollars annually from actual hands-on medical treatment.

What appears as wasteful to the normal person such as the enormous resources devoted to complicated billing and other insurance related activities (BIR), as documented by Dr.Kahn, is considered as income and revenue by insurance companies because they charge for these excesses.

Thus, extravagant squandering of funds and resources is endemic to the business model of insurance companies and precisely because it adds to their bottom line, there is no incentive to eliminate the bureaucratic discombobulation.

Healthcare economics scholar Uwe Reinhardt expressed his exasperation even before ACA in his Nov. 19, 2008 testimony to U.S. Senate Finance Committee: "900 billing clerks at Duke with 900 beds. Not sure we have a nurse for each hospital bed but we have a billing clerk. It's obscene."

This chronic problem has grown with ACA.

Dr. Kahn tells me that his study measured billing and other insurance-related over-costs at an astounding $375B annually. A national health system that would offer the same comprehensive care for everyone without fracturing care into thousands of different plans "would save us billions," he says.

He points to Australia and Canada, where government medical insurance administrative fees are lower than 3%, similar to our Medicare.

Kahn also indicated in our interview that these lower costs are sharply contrasted to the 33% administrative toll for care funded through U.S. for-profit insurers - all of which we pay.

These figures are truly stark.

"It makes no sense," Kahn said, "to unnecessarily spend what amounts to $1200 extra each year for every man, woman and child in the U.S. just to push papers around" as part of the billing and extraneous marketing functions of insurance companies.

We have to return to a "focus on quality clinical care where the patient and health provider themselves consult directly about the best care available," Kahn emphasized, without jumping through hoops of complex and cumbersome financial restraints encoded in each policy.

Activists like Bechler hope that experience with ACA will awaken more to support HR 676 National Health Care Act which provides Medicare for All or Single Payer as supported by Dr. Kahn and Dr. Geyman.

Realistically, however, he says that the daunting economic and political power of insurance companies means we have a lot of grass roots organizing to do.

We must first recognize fatal flaws in the ACA and then act to get something better, Bechler suggests, by signing up for activities in California or nationally.