Venezuela sanctions: Maduro Fumes at 'imperialists' as US Targets Officials

In an executive order issued by Barack Obama, the White House said the situation in Venezuela posed an “extraordinary threat” to US national security. Maduro, the Venezuelan president, reacted with anger in a televised address on Tuesday night, calling on his country’s Congress to grant him additional decree powers to “fight imperialism”. 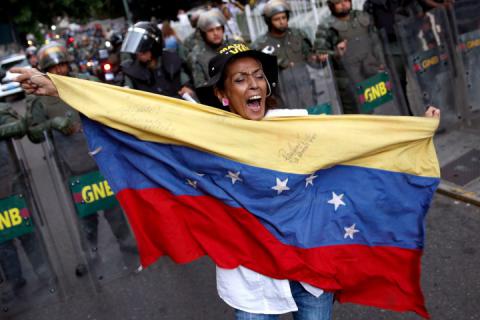 Venezuela called its highest-ranking diplomat in Washington back to Caracas in a further escalation of tensions as the Obama administration imposed sanctions on members of the government of President Nicolás Maduro, who promised to retaliate against the “imperialist elite” in the US.

Monday’s announcement that Maximilien Sánchez Arveláiz would return to Caracas, came as the US ratcheted up its diplomatic row with Venezuela, declaring the country a national security threat and expanding targeted sanctions to an additional seven top government officials.

In an executive order issued by Barack Obama, the White House said the situation in Venezuela posed an “extraordinary threat” to US national security.

Maduro, the Venezuelan president, reacted with anger in a televised address on Tuesday night, calling on his country’s Congress to grant him additional decree powers to “fight imperialism”.

Maduro told the nation: “President Barack Obama, representing the US imperialist elite, has personally decided to take on the task of defeating my government and intervening in Venezuela to control it.

“That’s why they have taken today’s measure.”

One of the individuals targeted by the US, Major General Gustavo Gonzalez, director general of Venezuela’s intelligence service, was immediately promoted by Maduro to interior minister, a key post responsible for keeping the peace. The US says he has been complicit in acts of violence against protesters.

The declaration of Venezuela as a threat to US national security is the first step towards imposing wider sanctions against the South American country, which sits on the world’s largest oil reserves and is a major supplier to the United States.

“We are deeply concerned by the Venezuelan government’s efforts to escalate intimidation of its political opponents,” said the White House spokesman Josh Earnest. “Venezuela’s problems cannot be solved by criminalising dissent.”

The deteriorating diplomatic situation between the US and Venezuela comes just as there is a thaw in American relations with Cuba, the Venezuelan government’s number one ally.
Advertisement

With discontent spreading as the country’s economy sinks into crisis, the Maduro government has stepped up the persecution of the opposition to his leftist government, jailing top dissidents and cracking down on street protests.

The US sanctions target seven high-level military, police and government officials, who the White House says were involved in human rights abuses or corruption, including the director of the national police, the head of the intelligence service and a prosecutor who has charged opposition leaders with conspiracy. The inspector general of the armed forces was also included.

“Venezuelan officials past and present who violate the human rights of Venezuelan citizens and engage in acts of public corruption will not be welcome here, and we now have the tools to block their assets and their use of US financial systems,” Earnest said.

The US had announced similar sanctions against other officials in December and February but had not named them publicly.

The White House said many of these officials were responsible for the use of excessive force against widespread protests in 2014 in which 43 people were killed, including government agents and civilians. Dozens of the more than 3,000 people arrested during the protest remain behind bars.

The White House also called on Venezuela to release all political prisoners, including “dozens of students”.

Venezuelan political analysts had predicted retaliatory measures by Washington after Maduro on 28 February ordered the US to reduce the size of its diplomatic mission in Caracas and imposed mandatory visas for visitors from the United States. He also ordered restrictions on meetings between US diplomats and members of Venezuelan civil society and blacklisted former and current US politicians, including George Bush and Dick Cheney, from entering the country.

Maduro accuses the United States of plotting with opposition leaders in Venezuela to stage a coup against his government, claiming to have uncovered and thwarted several plans.

His government faces growing discontent among Venezuelans as the country’s economic woes deepen amid a worldwide slump in oil prices, the country’s main earner. With inflation last year nearing 70%, a sharp economic contraction and growing shortages of basic goods, the Venezuelan government has turned to blaming an outside threat.

“He has turned to the old thesis of an external enemy to try to shore up support,” said the Venezuelan political analyst John Magdaleno, who says the Venezuelan government will probably use the new sanctions to bolster its anti-US discourse.

Opponents immediately blasted Maduro’s push for more unilateral powers, saying he would use them to quash dissent. Decree powers were a favourite tool of Maduro’s mentor and predecessor, the late Hugo Chávez, who used them to promulgate dozens of laws that dramatically boosted state control over the economy. Maduro was granted special powers shortly after taking office in 2013, in the service of overhauling the economy, but stayed away from major reforms.

“President Barack Obama, in the name of the US imperialist elite, has decided to personally take on the task of defeating my government, intervening in Venezuela, and controlling it from the US,” Maduro said.