The Most Dangerous Woman in America

Kshama Sawant, the socialist on the City Council, is up for re-election this year. The corporate powers, from Seattle’s mayor to the Chamber of Commerce and the area’s Democratic Party, are determined she be defeated, and these local corporate elites have the national elites behind them. This will be one of the most important elections in the country this year. 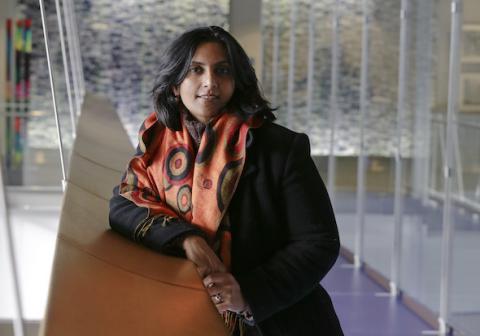 SEATTLE—Kshama Sawant, the socialist on the City Council, is up for re-election this year. Since joining the council in January of 2014 she has helped push through a gradual raising of the minimum wage to $15 an hour in Seattle. She has expanded funding for social services and blocked, along with housing advocates, an attempt by the Seattle Housing Authority to allow a rent increase of up to 400 percent. She has successfully lobbied for city money to support tent encampments and is fighting for an excise tax on millionaires. And for this she has become the bête noire of the Establishment, especially the Democratic Party.

The corporate powers, from Seattle’s mayor to the Chamber of Commerce and the area’s Democratic Party, are determined she be defeated, and these local corporate elites have the national elites behind them. This will be one of the most important elections in the country this year. It will pit a socialist, who refuses all corporate donations—not that she would get many—and who has fearlessly championed the rights of workingmen and workingwomen, rights that are being eviscerated by the corporate machine. The elites cannot let the Sawants of the world proliferate. Corporate power is throwing everything at its disposal—including sponsorship of a rival woman candidate of color—into this election in the city’s 3rd District.

Sawant’s fight is our own.

I met Sawant in a restaurant a block from City Hall in Seattle. She is as intense as she is articulate. Sawant, born in India, is a leader of the Socialist Alternative Party. She holds a doctorate in economics from North Carolina State University and before her election to the City Council was a professor at a community college. She knows that there will be no genuine reforms, let alone systemic change, without the building of radical mass movements and a viable third party. She is as familiar at Seattle street demonstrations, where she has been arrested, as she is in City Council hearings. If there is any hope left for the absurdist political theater that characterizes election campaigns it is in renegades such as Sawant.

“The idea that things have to get a lot worse to have some sort of awakening and bring about an alternative to this corrupt and defunct corporate political system is inaccurate,” she said to me. “What we need is a big surge for an independent working-class political alternative while people are experiencing a sense of confidence, after decades of bitter defeat. The $15-an-hour victory in Seattle is going nationwide. And while unions are under massive attack, as you see in Wisconsin with Scott Walker, there are also successful labor initiatives getting onto the ballot. Four states—two of them Republican states—increased the minimum wage last year. Occupy and the Black Lives Matter movement have radically shaken U.S. consciousness. Now is the time for us to strike.”

Sawant said it is incumbent upon socialists and the entire U.S. left to swiftly begin the task of building working-class political campaigns independent of the Democratic Party in order to create the space for a viable national party. Efforts to reform the Democratic Party, whose leaders are in the service of the corporate oligarchy, amount to pouring energy into “a black hole,” she said. The Democratic elite dominate Seattle government, and the Democratic elite, as they did with Ralph Nader, have declared war against Sawant. As long as she remains in office she will expose the leaders in the Democratic Party for who they are—corporate puppets.

Sawant believes that because of the presidency of Barack Obama—who has served corporate power, expanded imperial wars, carried out a massive assault on civil liberties and failed to address the needs of the mounting numbers who are unemployed or underemployed—many people, especially young people, are hungry for political alternatives to “the two big business parties.” Poll after poll, she pointed out, shows the American majority to be disgusted with the Congress. And she cited the problems of Chicago Democratic Mayor Rahm Emanuel in seeking re-election as evidence that even the very beginnings of movements by working people and communities of color can shake and weaken the Democratic Party establishment. “He was considered undefeatable,” she said of Emanuel. “But look now at his vulnerability. Look at the campaign ad he just put out saying, yes, I made mistakes, but I am a human being. Who could have imagined that kind of false humility from him? Even spending $15 million on a mayoral race and having President Obama come and campaign wasn’t enough to buy him an easy victory. This demonstrates the wide opening for the U.S. left to present a principled working-class alternative. This is why we need to begin that project now. It won’t be easy. But this moment is qualitatively different from the period when Ralph Nader ran. The consciousness of the American people has changed. Uprising is in the air.”

Sawant emphasized that the process of building a radical alternative will be long and difficult. The obstacles the Establishment will throw up to prevent such a movement will be numerous, costly and unscrupulous.

“We cannot have illusions,” Sawant said. “We want to win. But we also know that in one year we are not going to vanquish the money machine of the Democratic establishment. The goal of this campaign should be to launch a massive grass-roots effort nationwide, and to build on it after the election, something that Ralph Nader failed to do. We have to provide a place for people looking for something different, especially the younger generation. Any presidential campaign cannot be run as an end in itself. That will dishearten people. People know what is going to happen in 2016. It is going to be Hillary Clinton or some Republican. Our campaign needs to be a launching pad for something bigger. It needs to be about building a mass movement, a viable radical alternative. This is what is happening in Greece and Spain.”

Sawant proposed that the left prepare the ground for a new party that will be “broad-based, organized around democratic principles and have as its fundamental goal the mission of working with the labor movement, nonunionized workers and young activists of color.”

“It has to be 100 percent grass roots,” she said. It must be willing to “use the platform of the presidential campaign and other electoral campaigns to push the message of mass movements.” And, she stressed, it must never accept corporate money. This last condition, she said, “has to be non-negotiable.” The party, she added, “must not bow down to the pressure to endorse Democratic candidates against Republicans, which would completely undermine its independence and ultimately relegate it to the role of an enforcer for the Democrats, as the Working Families Party has become.”

Might there be a role for the Green Party in such a change? Sawant offered this assessment:

The Green Party and its activists need to be part of the effort towards a nationwide party for the working class.

The Green Party has made some important contributions to the struggle against the Democrats’ lesser-evil politics. It has raised demands in the interests of workers, against corporate domination, against the war, and against climate change. One outstanding example is Gayle McLaughlin, who as Green Party mayor of the California city of Richmond, invited the fury of Wall Street banks with her valiant fight on behalf of ‘underwater’ homeowners.

But the party for the left, for the American working class, needs to go beyond the electoral arena and lead struggles and movements of low-wage workers, people of color and women. The Green Party has not often sought to do that. The problem is that if a party does not do that, it leaves the various social movements open to misleaders who channel the energy back towards the Democratic Party.

“In Socialist Alternative,” Sawant said, “any elected representative who runs has to pledge to only take the average worker’s wage. The City Council pays me nearly $120,000. I take home $40,000 after taxes. The rest goes into a solidarity fund. This idea should also be taken up in some form by the new party.”

“A campaign cannot be an end in itself,” she said. “If you take office you have to be accountable to the members of the party. You have to have actual meetings. People say they are Democrats, but when was the last time they were invited to a meeting and asked to vote on the policies to be taken up by the Democratic Party? The Democratic Party is utterly undemocratic—the party members and activists have essentially zero say over what their elected officials do once in power.”

A new party, she said, is essential if the corporate coup is to be reversed. And it needs to be formed soon.

“While young radicals correctly see the need for mass action, some have not yet made the vital link between mass movements and the need for alternative political structures,” she said. “We cannot get rid of capitalism without building a mass political organization as a tool to do that.”

“If a genuine alternative is not built,” Sawant said, “the Democratic establishment will continue to co-opt generation after generation of young people who are concerned about the need to fight the Republicans. Even the most radical youths end up implicitly defending capitalism when they accept the parameters of lesser evilism, as so many did with supporting Obama in 2008 and 2012.”

She contends that the end of the Cold War has left younger generations freer to explore and hear radical alternatives.

“Something important has changed,” she said. “The hostility to socialist ideas is not present now because we have a majority of young Americans who are experiencing the deep failures of capitalism. Red-baiting does not work on them. As a socialist, I have never experienced any hostility, except from the Establishment. This does not necessarily mean all those people who support us are socialist. But it means people are infuriated about income inequality, about the pillaging by the big banks. They are burning at the entrenched racial injustice in America. They want a solution to climate change. They are looking for something radically different.”

The call for a national party is, in the end, a call to educate. It is a call to put forth a program that offers an alternative to global capitalism. And it is a call to empower the citizenry to break the corporate stranglehold to make this alternative possible.

“We must convince people that we need an alternative and we must convince them about what that alternative is,” Sawant said. “We need to stand up for the hundreds of millions of lives devastated by global capitalism. The abuses we saw in 2008 will happen over and over again as long as capitalism survives. And it is our job to break the cycle of capitalist exploitation of people and the ecosystem and save ourselves. This will only come about if we organize mass movements, if we build a radical political party and if we refuse to accept a system designed to subject the immense majority to misery so that a minority can pile up untold wealth.”