This Jay Is Evolving in a Very, Very Weird Way

Being on the way to becoming a new species isn’t the same thing as actually speciating. Actual speciation without isolation is quite rare, and even the Santa Cruz Island jays have not actually speciated, and may never even do so. But the implications for long-held evolutionary principles are intriguing. Darwin’s famous Galapagos finches certainly prove that isolation leads to speciation, but now it may be that isolation isn’t always necessary to get species to diverge. 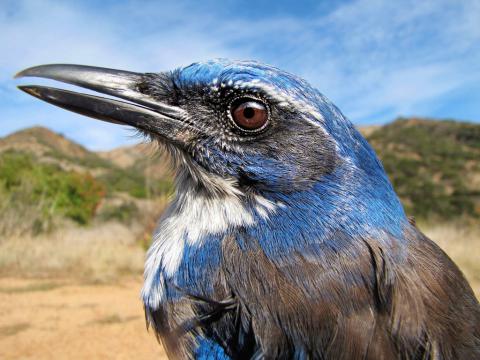 An acorn-eating island scrub jay. Another population of the species specializes in attacking pine cones, and accordingly has a differently shaped bill., Katie Langin

The scrub jays of California’s Santa Cruz Island really love a good peanut. “It’s like crack to them,” says Katie Langin, a biologist at Colorado State University who probably knows these birds better than anyone else. Working with Scott Morrison of the Nature Conservancy, Langin started visiting the peaks and valleys of this wild island in 2007, baiting jays with nuts to trap and tag them for her dissertation. Before she came along, what researchers knew about the island scrub jay came from observations in just a handful of places. Much of this rock is inaccessible, but Langin had a helicopter.

As she gathered more and more data on different populations of the birds around the island, Langin had a revelation: The birds, members of one single species, had split into two varieties in different habitats. Island scrub jays living in oak forests have shorter bills, good for cracking acorns. Their counterparts in pine forests have longer bills, which seem better adapted to prying open pine cones. That may not appear to be something you’d consider a “revelation,” but it really is—if you believe in evolution. Ever since Darwin and his famous finches, biologists have thought that in order for a species to diverge into two new species, the two populations had to be physically isolated. Those finches, for instance, each live on a different Galapagos island, where their special circumstances have resulted in specialized bill shapes. Yet the two varieties of island scrub jay (they haven’t technically speciated—yet) live on the same tiny island. If they wanted to meet each other for a brunch of acorns and/or pine nuts and perhaps later some mating, they could just fly right over.

This is very, very weird. It’s an affront to a sacred tenet of evolution you probably learned in school: Isolation drives speciation. Well, speciation can also come about in a broadly distributed population, with individuals at one end evolving differently than individuals at the other, but nothing kicks evolution into overdrive quite like separation. Without it, two varieties should regularly breed and homogenize, canceling out something like different bill shapes (though rarely the two types of island scrub jay will in fact interbreed). And the island scrub jay isn’t alone in its evolutionary bizarreness. In the past decade, scientists have found more and more species that have diverged without isolation. Langin’s discovery with island scrub jays, published last week in the journal Evolution, is perhaps the most dramatic illustration of this yet.

I Say Species, You Say Specious

It’s probably a good idea to take a moment and talk about what exactly a species is. The problem is, it’s hard to say. A species is supposed to be a group of organisms that look similar and can exchange genes by breeding (a handful, though, reproduce asexually). Yet some species can mate with each other and produce offspring, hybrids, and while most of the time they’re sterile, two different species can also come together to produce fertile offspring that can form a new species. So…it’s complicated. Nature doesn’t give a damn about our penchant for classification.

What is clear is that speciation has produced the incredible diversity of life on Earth, and the engine of speciation is reproductive isolation. You can have an island that gets separated from the mainland by rising sea levels, stranding its wildlife to uniquely evolve. Or a volcano can erupt into an island and creatures can float or fly there, as is the case with Hawaii. On the mainland, a new mountain chain can sprout or a river can emerge, splitting a population in two. Thus isolated, the two populations may split into two distinct species adapting to their environment, and those two species may split into two more species, and so on, growing Earth’s enormous tree of life.

Now, the island scrub jay has apparently said “screw all that isolation.” This is particularly weird because birds have, you know, wings. It’d be easy to see how something less mobile like a snail could split and stay isolated, but the jays are more than capable of flying between populations and mating. Yet they only very rarely do. Why that is, Langin isn’t yet sure, but she has a few hypotheses. A simple explanation would be that each variety is only attracted to birds with beaks like its own. But then how did the split happen in the first place? Perhaps a population of jays long ago settled in a certain kind of forest, evolved either an acorn- or pine cone-specialized beak, and henceforth found only that trait to be wildly attractive (sexual selection is, after all, a matter of determining the fitness of your mate, and few things are more fit than being able to eat the food in your environment). “Another alternate hypothesis going into this would be maybe individuals that are hatched in pine habitat just prefer to settle in pine habitat,” Langin says. “There’s actually a lot of evidence that experiences birds have immediately after they hatch come into play when they’re selecting a place where they want to breed.” She cautions, though, that her study didn’t collect the data needed to support this, and that more research is in order here.

Whatever is going on, the jays have been living on little Santa Cruz Island for perhaps a million years, yet here they’ve arrived at a divergence. When that started happening, Langin isn’t sure. “This was really surprising given that these habitats were directly adjacent to one another,” Langin says, “and this bird is one of the most narrowly distributed birds in North America.” At face value, it doesn’t seem to make much sense that one of the most narrowly distributed birds in North America has diverged. But, Langin says, “a lot of work recently supports the idea that you don’t need to have geographic isolation in order to have evolutionary divergence occur. There are a lot of examples coming out now that show that at really small spatial scales you can actually get divergence.”

It’s pretty sensational stuff, so sensational that more than a handful of scientists were skeptical of Langin’s claims—initially, at least. “I had one come up to me after a talk I gave in Vancouver, and he said, ‘Katie, I finally believe you!’”

That skeptic was John Fitzpatrick, director of the Cornell Lab of Ornithology, who also studies jays. The fact that Langin’s jays are “literally adjoining one another and presumably even dispersing to one another’s places just seemed farfetched, frankly,” he says. “It seemed that that would be ecological speciation that’s never been demonstrated in birds. So I basically said to Katie, ‘I think you’re barking up a tree that’s pretty scary for a Ph.D. thesis.’”

“But Katie’s nothing if she isn’t persistent and hardworking,” Fitzpatrick adds. “She really has shown a remarkable pattern out there that does make evolutionary sense. It makes ecological sense. But it’s just surprising to be seeing it in action at the scale as tiny and close-knit as the Santa Cruz Island populations are.”

It makes sense because this kind of divergence has been observed in other species. Fitzpatrick says scientists have been talking about speciation without isolation since the 1970s, but for a while there biologists struggled to find many examples out there in nature. Now that seems to be changing. “Within the last decade an increasing number of studies, not just with birds but in fact more so with insects and other invertebrates, show that under certain fairly stringent conditions, this genetic separation can happen even without physical isolation,” Fitzpatrick says.

Take, for example, the apple maggot fly in the Northeast US. It feeds on the hawthorn tree, but when Europeans showed up with apple trees, some of the flies switched to feeding on those. Two different populations then emerged, each focusing on a different kind of tree, even though they all live in the same neighborhood. And they could well be on their way to becoming separate species. But being on the way to becoming a new species isn’t the same thing as actually speciating. Actual speciation without isolation is quite rare, and even the Santa Cruz Island jays have not actually speciated, and may never even do so. But the implications for long-held evolutionary principles are intriguing. Darwin’s famous Galapagos finches certainly prove that isolation leads to speciation, but now it may be that isolation isn’t always necessary to get species to diverge. “My big-picture thought is that Katie’s work—as the Galapagos work does—sort of gives all of us a wakeup call to say we ought to go look for additional examples of this which may be sitting right under our noses,” Fitzpatrick says. “And that’s always exciting in science.”

Langin admits she’s only just starting to understand how island scrub jays set down the path to their weird evolution. “I feel like this is just the beginning of the story,” she says. “We’re just scratching the surface here.” She notes that with Peter and Rosemary Grant, biologists who spent decades studying Darwin’s finches in the Galapagos, “their first publications were really exciting, but ultimately a much more complete and rich story was told over the course of 30-plus years of studying those birds. So I think the same thing is going to happen with island scrub jays.” At least for the time being, though, it won’t be Langin who further unravels the mysteries of island scrub jay evolution. She says she’d love to get back to Santa Cruz Island, but she has other fieldwork on the horizon. “So for now I’ll have to pass the torch to the next crop of grad students.”

Those with peanut allergies need not apply.