100,000 Irish March Through Dublin to Protest Against Water Charges

In Ireland, with a population of 5 million, upwards of one hundred thousand took to the streets to protest the new charges for water. The Irish government's austerity measure has sparked widespread public anger, with Saturday's street protest the fourth since October. 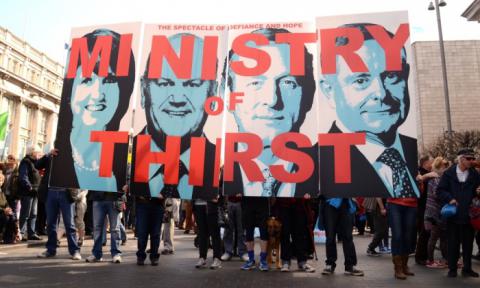 Protesters in Dublin on Saturday hold up banners in opposition to the new water charges set in place by Ireland's coalition government., Photograph: Monica Manzzi Barlocco/Demotix/Corbis // The Guardian

Tens of thousands of people marched in Dublin on Saturday in the latest protest against the government's new water charges. It is the latest show of public opposition to the austerity measure put in place by Ireland's coalition government, which hopes the country's economic growth will quell the discontent.

Ireland's economy surged by a post-crisis high of 4.8% last year and is forecast to be the fastest-growing in the European Union again in 2015, but many have been left frustrated by the uneven nature of the recovery.

One year before it seeks re-election, the government has begun directly charging households for water use. It is the final piece of a seven-year, _30bn (£21.7bn) austerity drive, but also the measure that has elicited the largest public backlash. Saturday's mass protest was the fourth since October.

Organisers said 80,000 protesters marched in the capital - many holding Greek flags to show solidarity with the stricken eurozone member. The national broadcaster, RTE, said the crowd was 30,000 to 40,000 strong.

"This government believes that the anti-water charges campaign is dying, that we are on our last legs. Well, today we have sent them a message," said Lynn Boylan, a member of the European Parliament for the opposition Sinn Féin party.

"These families simply cannot take any more. The government is pushing people over the edge."

"This campaign is going from strength to strength. We are on the march. And we will not stop until water charges are scrapped and Irish Water is abolished.

"Sinn Féin warned the government that Irish Water was nothing more than a toxic quango. The citizens of Ireland in their hundreds of thousands told [minister for the environment] Alan Kelly that they cannot and they will not pay.

"Europe has warned the government that their back of the envelope calculations do not stack up. How do they respond? By jailing protestors and spending _650,000 on a new ad campaign; not to mention wasting over _85m on private consultants, _539m wasted on water meters. Hundreds of Garda hours wasted on policing the ill-fated installation of water meters."

Boylan also questioned how people could pay the charge when they "cannot afford to keep the roof over their head".

She said: "The lengths that this government will go to defend their precious Uisce Éireann [Ireland's water company] is astounding. Local authorities have begun the process of handing over the details of tenants. Landlords are being forced to do the same. For Sinn Féin this is a red line issue. Let this message go out loud and clear;: water charges and Irish Water must be consigned to the dustbin of history."

The trade unions affiliated to the campaign - the CPSU, CWU, Mandate, Opatsi and Unite - are also calling for a referendum to be held "following abolition of the charges" to enshrine public ownership of Irish Water in the Constitution.

The trade unions will present the outline of their draft water management policy at their forthcoming May Day conference.