Fifteen non-profits launched a petition on March 23 calling on the Smithsonian's American Museum of Natural History and the Natural History Museum of New York to remove David Koch from their boards of trustees because "he bankrolls groups that deny climate science." Serious questions are being raised about institutions that accept money from donors whose business and political dealings are in direct opposition to the institutions' missions. 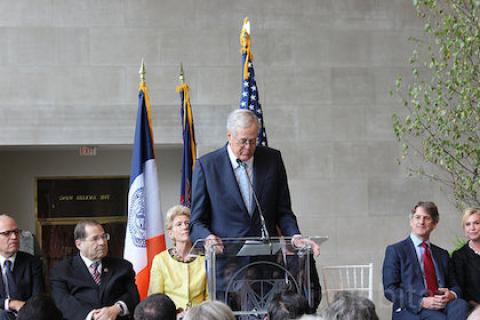 A new campaign urging science museums to cut ties with David Koch has thrown a spotlight on the billionaire Koch brothers' enormous philanthropic footprint and their oil interests, as they continue to undercut climate science, environmental regulations and clean energy.

Fifteen non-profits, including the Sierra Club, Greenpeace and Daily Kos, launched a petition calling on the Smithsonian's National Museum of Natural History and the American Museum of Natural History in New York to remove David Koch from their boards of trustees, because "he bankrolls groups that deny climate science." The non-profits cite a letter to museums, also sent Tuesday, by more than 30 scientists asking for a severing of ties to all fossil fuel interests.

David Koch's considerable donations to the country's two premier natural history museums are part of the Koch family's wide-ranging philanthropy. The family has delivered hundreds of millions of dollars to leading cultural, medical and academic institutions over the last 40 years, including the Metropolitan Museum of Art, Lincoln Center and the Massachusetts Institute of Technology.

David and his brother Charles have also emerged as the nation's top donors to a vast array of libertarian-conservative politicians and causes, creating and sustaining a large, influential network of advocacy groups and right-wing think tanks. Among the top causes championed by Koch-backed groups and individuals are climate denial and opposition to climate-friendly policies.

As the Kochs' political agenda has grown clearer and more muscular, their philanthropy is raising questions about how museums, medical centers and universities can accept money from donors whose business and political dealings are often in direct opposition to the institutions' missions.

"It is one thing for David Koch to give money to Lincoln Center or Carnegie Hall, but it is quite another to support a science/natural history museum that has a role to play in doing research on, and helping educate the public about, climate change, the greatest threat ever to confront humanity," Nobel laureate Eric Chivian, a signer of the letter, said in a statement. "The philanthropy serves to silence any criticism of the practices of the donor, and even possibly, any critical discussion of the issue."

Koch Industries did not respond to requests for comment.

An oil, petrochemical and paper conglomerate, Koch Industries built its fortune on investments in Canada's heavy oil industry as early as 1959. That move has been central to the company's growth and diversification. The company remains deeply invested in Alberta, where most of Canada's tar sands deposits are located. The Kochs have long lobbied against carbon and environmental regulation, but their electoral spending and influence has soared since the Supreme Court's 2010 Citizens United ruling allowed companies and unions to donate unlimited amounts to political candidates.

In recent years the vast Koch network and rise of the Tea Party helped make climate change skepticism a litmus test for Republican candidates. The Koch-founded advocacy group Americans for Prosperity has persuaded members of Congress to sign a pledge opposing federal action on climate change. AFP and the Koch-backed American Legislative Exchange Council (ALEC) have also gotten state legislators to introduce bills that would block state funding for the EPA’s efforts to reduce greenhouse gases from power plants.

At the Smithsonian's National Museum of Natural History, the David H. Koch Hall of Human Origins details the evolution of humankind through the use of video, sculpture, skeletons and interactive media that, for example, let you see yourself as a Neanderthal. David Koch donated $15 million for the exhibit. Just past the entrance, a video about global climate change runs in an endless loop. The video's text explains that the Earth's climate has been changing for millions of years and that while the shifts posed challenges for early humans, they adapted over time to survive.

Beneath the video screen, a timeline shows the spikes and dips in the Earth’s average temperature over millions of years––including the steep increase of the last 100 years. Yet the climate display says nothing about the cause of the current era's higher temperatures: the enormous use of fossil fuels, the kind that form a core business of Koch Industries. Instead, the exhibit leaves visitors with the impression that climate change is part of the Earth's natural cycle and that humans can adapt to it.

Inside the Kochs' Giving

Forbes estimated in late 2014 that Charles and David Koch, whose company is headquartered in Wichita, Kan., are the sixth richest people in America, worth about $40.6 billion each. The brothers inherited a successful oil refining company from their father, Fred, when he died in 1967.

They then built it into the second-largest privately owned company in the country, in part through their aggressive development of Alberta's tar sands. The company remains one of the oil patch's largest mineral leaseholders; one of Canada's largest crude oil purchasers, shippers and exporters; and among the largest U.S. refiners of oil sands crude, responsible for about 20 percent of imports.

The Koch Family Foundations include the Fred and Mary Koch Foundation, which focuses on arts, conservation and university projects in Kansas, and the Koch Cultural Trust, which gives grants to performing and visual artists in the state.

The David H. Koch Charitable Foundation is arguably the splashiest donor of the network, giving money to David Koch's political projects and his cultural and scientific interests. The foundation’s website has a brief description of Koch's political giving without providing dollar amounts for the donations. The site says only that David Koch "has funded research and education programs that analyze how freedom creates prosperity and advances social progress.  He serves on the boards of the Cato Institute, Reason Foundation and Americans for Prosperity Foundation," climate contrarian groups that promote limited environmental regulation and other libertarian causes.

The site's descriptions of Koch's cultural giving are far more detailed. He gave $65 million to refurbish the Metropolitan Museum of Art's outdoor area, now called the David H. Koch Plaza, replete with "with new fountains, landscaping and improved access, all designed with sustainability in mind."

The foundation also gave $100 million for renovating part of Lincoln Center, now known as the David H. Koch Theater, which is home to the New York City Ballet and New York City Opera.

After being diagnosed with prostate cancer in the early 1990s, David Koch has funded cancer research handsomely, including $66.7 million awarded to the Memorial Sloan-Kettering Cancer Center in New York City;  $100 million to the New York-Presbyterian Hospital to help build the David H. Koch Center, an ambulatory care site; and $100 million to his alma mater, MIT, for the David H. Koch Institute for Integrative Cancer Research at MIT.

Yet as David Koch lavishly funded cancer research, his company fought hard to limit regulation of formaldehyde, a human carcinogen, according to a 2010 article in The New Yorker magazine. Koch Industries became a major producer of formaldehyde with its acquisition of the wood, chemical and paper products manufacturer Georgia Pacific, maker of Dixie cups and Brawny paper towels. The EPA has tried for years to tighten limits on formaldehyde. But its efforts have been stalled in large part because of resistance from members of Congress backed by industry, including the Koch brothers.

The Charles Koch Foundation gives to economics research and to dozens of universities, in an effort to win "the hearts and minds of American college students" to the brothers' libertarian free-market worldview, according to a 2014 investigation by the Center for Public Integrity.

The flagship of the Charles Koch foundation's work in academia is George Mason University in northern Virginia. The college has received tens of millions of dollars over the years to support the Mercatus Center, which describes itself as the "world's premier university source for market-oriented ideas," and its Institute for Humane Studies, which specializes in researching "the practice and potentials of freedom," according to the Center for Public Integrity.

In 2008, the Charles Koch Foundation pledged $1.5 million to Florida State University to fund teaching positions in the economics department. But the money came with strings attached, according to a 2011 Tampa Bay Times investigation. Among them: "An advisory committee appointed by Koch decides which candidates should be considered. The foundation can also withdraw its funding if it's not happy with the faculty's choice or if the hires don't meet 'objectives' set by Koch during annual evaluations," the Times reported.

Florida State defended its decision. John Hardin, Charles Koch Foundation director of university relations, said in an email that critics of the philanthropy try to discredit its work because they don’t share the Kochs’ political views. "This is particularly troubling in Florida, where the school and its leaders have repeatedly reviewed materials and reaffirmed that everything has been conducted in accordance with university standards and the principles of academic freedom," Hardin said.

The periodic criticism about the Kochs' politics or even the potential conflicts of interest does not seem to have made institutions reluctant to take their money, and it's unclear if the new campaign would prompt them to cut ties. The Smithsonian's National Museum of Natural History closed its Dinosaur Hall last year to undertake a five-year $35 million renovation bankrolled by David Koch. Like the Hall of Human Origins, the Dinosaur Hall will be named after him.

The calls to turn away fossil fuel money stir up difficult questions about what kind of ethics museums, universities and other non-profits need to employ in taking major donations.

"One of the magical beliefs in the museum world is that you can take money made from questionable practices such as high carbon dioxide emissions and destruction of the environment and somehow this money is now pure because it's been taken by museum," said Robert Janes, a former museum director who is now editor-in-chief of the peer-reviewed journal Museum Management and Curatorship.

"Museums need to have these conversations [about donors] and they may be painful conversations. The museums might have to return to their core purpose and be smaller," said Janes, who is based in Alberta.

Other experts on philanthropy contend that the outcomes the donations create are more important than the intentions of the donors. Olivier Zunz, a professor of history at the University of Virginia and an expert on American philanthropy, said the "more important thing is to see if there are strings attached than second-guessing the intent of donors."

[Neela Banerjee is a reporter for Inside Climate News. Before joining ICN, she spent four years as the energy and environmental reporter for the Los Angeles Times and covered global energy and the Iraq War for The New York Times. You can reach her by email at neela.banerjee@insideclimatenews.org.]