Age hasn't dimmed the fire in Toni Morrison, 84. The unwavering voice of black America talks about her latest novel and what it will take for racism to be a thing of the past 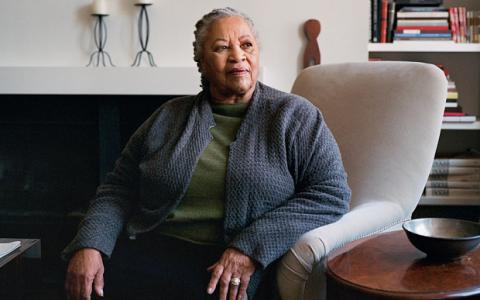 The novelist Toni Morrison ,Photo: JOSS MCKINLEY
Toni Morrison is, without a doubt, a world-class novelist. Her work as an editor, however, has received much less attention. Morrison worked at Random House for 20 years, leaving in 1983, just before she set out to write her Pulitzer Prize-winning novel Beloved.
At her apartment in lower Manhattan, I ask her about the ways in which American literature has changed, and she volunteers that she “had something to do with that”. But she is not referring to her own fiction. “I said, I can’t march, I have small children,” she tells me. “I’m not the marching type anyway. So when I went into publishing, I thought, the best I can do is to publish the works of those who are out there – like Angela Davis, Huey Newton – and the literature. And let it be edited by someone who understands the language, and understands the culture.”
One of the books Morrison published in those Random House years was the autobiography of Muhammad Ali. The Greatest: My Own Story came out in 1975 and was deemed to be, in one critic’s estimation, “the greatest contribution to sports literature perhaps ever”. Things between Morrison and Ali weren’t always easy. “Ali wouldn’t even answer my questions,” she says. “I’d be in a room full of guys. They’d say, 'Oh my God, look at his hands. Ooh. And look at his neck. Ooh...’ They weren’t doing anything but saying, 'We love you’.” If she asked Ali a question, he would reply to one of the men.
Then Morrison remembered something, a story about an old Jewish lady on the West Side, who was about to be evicted from her apartment, and how Ali had helped her pay the rent. “And I thought, you know what? Ali pays respect to older women.” Morrison was 44 at the time; she was bringing up two sons on her own, and had written two novels – The Bluest Eye and Sula. “So I put on my grown-up shoes, and next time I saw him I had my arms crossed. I said, 'Ali, get up from there. You have an appointment.’ And he stood right up. He did everything I said after that.” When you are in the company of Toni Morrison, there’s really no mistaking who’s in charge.
Morrison is forbidding and theatrical in appearance, her smile glorious when it comes, her long grey locks clasped at the back of her head, looking as if they’ve been spun out of silk and steel. Though she is 84, and pain now makes her shuffle slowly across the floor, weakness is not a word one would ever associate with her. Her voice can be wispy and girlish, toying with an idea as if holding it up to the light, but her natural timbre is lower, warmer, with a faint suggestion of thunder.
On the walls of her new apartment (she moved because the old one had too many stairs) are several haunting paintings by her son, Slade, who died five years ago of pancreatic cancer. “He was painting these mouthless people,” she explains, pointing to a monochrome smudged portrait above the fireplace. “A girl came in here once, looked at that painting and burst into tears. She had been molested as a child, and something in there, with the inability to speak and the sad eyes, got to her in some profound way.”
The day we meet, Morrison herself is in a mood for laughter – occasionally at herself but, on a more serious note, at the rationale of cruelty, as if what it deserved most were ridicule. I have come to ask about her latest novel, God Help the Child, which she began in 2008 and returned to when she decided that the memoir she was contracted to write was not something she wanted to do.
for the rest of this article, please see http://www.telegraph.co.uk/culture/books/authorinterviews/11532385/Toni-Morrison-interview-on-racism-her-new-novel-and-Marlon-Brando.html
Subscribe to Portside