US to Study Cuba's Lung Cancer Vaccine: What the World Can Learn from Castro's Health Service

During the economic blockade by the US and after a string of serious disease outbreaks, Cuban leader Fidel Castro made biotechnology and medical research a key priority for the allocation of limited government funds. Johnson said: “They’ve had to do more with less, so they’ve had to be even more innovative with how they approach things. For over 40 years, they have had a preeminent immunology community.” 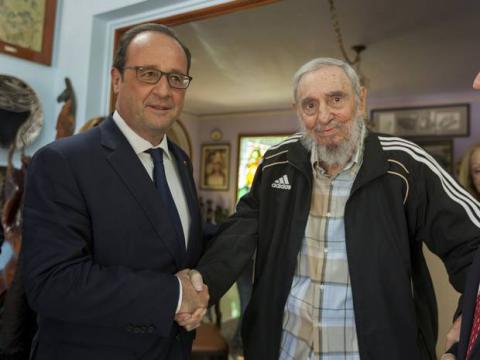 Shut off from the West for 55 years, Cuba was forced to come up with many of its own medical breakthroughs - and excelled in doing so. ,

American researchers are about to be given access for the first time to a breakthrough lung cancer vaccine developed in Cuba, in what could be one of the most significant benefits to the US of improving relations with the Communist state.

The closed-off Caribbean nation is emerging from a 55-year rift with the US, and the historic shift in diplomatic standing is set to give American scientists their first glimpse at the medical breakthroughs developed in Cuba during that time.

One of the most prominent is a drug which suppresses the growth of tumours in the lungs. Cimavax has been available for free to all Cuban citizens since 2011, is believed to have minimal side effects and can prolong the life of a patient in the late stages of the disease by as much as six months.

How has Cuba had such success?

The ground-breaking US study of Cimavax will take place at the Roswell Park Cancer Institute in Buffalo, New York, and the centre’s CEO Candace Johnson told Wired “the chance to evaluate a vaccine like this is a very exciting prospect”.

During the economic blockade by the US and after a string of serious disease outbreaks, Cuban leader Fidel Castro made biotechnology and medical research a key priority for the allocation of limited government funds.

The country ranks lung cancer as its fourth biggest cause of death, thanks at least in part to a love of good cigars, and experts in Havana worked for 25 years on the Cimavax vaccine before it was made available to the public.

Johnson said: “They’ve had to do more with less, so they’ve had to be even more innovative with how they approach things. For over 40 years, they have had a preeminent immunology community.”

Why is this only happening now?

The opening up of Cuba’s medical breakthroughs comes as part of a wider improvement in relations with the US – a charter flight service from New York to Cuba has already been announced, and licences for six direct ferry services with Florida have been approved.

But the specific decision to allow Cimavax to be studied in the US comes after a trade mission to Cuba led by New York Governor Andrew Cuomo.

According to the Bloomberg news agency, Cuomo oversaw the deal between Roswell Park and the Centre for Molecular Immunology in Havana in late April, and the governor said afterwards that it reaffirmed his believe normalising relations with Cuba was “the exact right way to go”.

He said: “There’s no doubt that developing these mutual business relationships, which assist Cuba and also work for the companies, is a big part of moving forward.”

So what does Cuba get in return?

As part of the deal, Manhattan-based company Infor will provide healthcare software to a Cuban university.

Infor CEO Charles Phillips said he was “surprised and impressed in the level of expertise they have in healthcare technology” during the trade mission, when a deal was agreed over a dinner of rice and beans.

But if the thawing of relations continues, the boost to the Cuban economy and potential for US investment could be coupled with the state’s immunology expertise to produce yet more breakthroughs.

The warming of ties between Cuba and western nations was underlined when President Francois Hollande met with a remarkably well-looking 88-year-old Fidel Castro, as well as his brother the President Raul Castro, on Monday. It was the first visit to the island from a French President in more than 100 years.

What will the US do with the drug?

Cimavax is reported to help lung cancer patients by encouraging the body’s immune system to attack a hormone known to encourage growth in tumours.

It is not a miracle cure, but it is cheap, very easy to administer and a small study suggested it could significantly prolong the life of patients.

“The idea is that the Cimavax vaccine induces a immune response [to stop production of the hormone],” Roswell Park’s Dr Kelvin Lee told ABC News. “The tumour is being starved.”

Dr Lee said the first step will be to win the approval of the US FDA for a phase 1 study covering the next six to eight months and involving a small number of patients.

But if that is successful, Dr Lee said, there was potential for the technology to work with other diseases that involve the same hormone – including breast cancer and pancreatic cancer.

Dr Elizabeth Mittendorf, an immunotherapy expery at the MD Anderson Cancer Centre in Houston, Texas, hailed the potential for progress with Cuban advances. She said: “Politics certainly should not prohibit good science from being further evaluated.”