Exciting video with English captions from 15M Movement in Spain with lessons for USA activists. 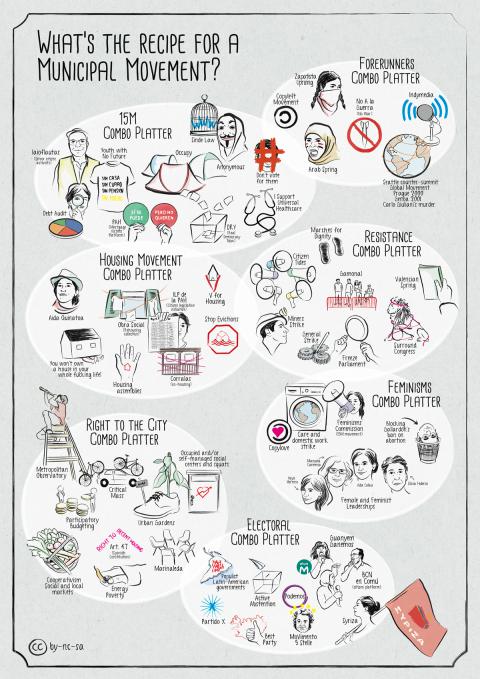 What's the Recipe for a Municipal Movement, Maria Castelló Solbés

Since the 15M movement, Spain has seen the rise of a democratic revolution from the bottom up. Whereas in 2011 it was all “bottom”, in 2015 the “up” is within reach. One of the most repeated mottos chanted at protests four years ago was Que no, que no, que no nos representan [No, no, they don’t represent us], “they” being the politicians in power. Today, we’re beginning to hear Que sí, que sí, que sí nos representan [Yes, yes, they do represent us], “they” being regular people who, tired of feeling unrepresented, have organized to try to take back the political institutions. This reverse, hopeful motto is what hundreds cheered at a recent gathering of activists running for the May 25th municipal elections as representatives of newly formed citizen candidacies around Spain.

It all started about a year ago with Guanyem Barcelona, now called Barcelona en Comú, an initiative that has inspired people in  dozens of Spanish cities and towns to create their own citizen candidacies, where members of various social movements and non-establishment political parties have converged to stand for local government, the most relevant being Ahora Madrid. With the elections just days away, the support for these new non-parties is turning out to be huge. Some of them, notably Barcelona en Comú, have a very good chance of winning, according to the polls.

In Municipal Recipes, a short documentary which Guerrilla Translation subtitled for the 2015 Zemos98 Festival, a small group of  activists involved in these municipal initiatives to share their experiences and expectations over lunch.

(The following text is extracted from the 15th ZEMOS98 Festival website)

Municipal Recipes is a documentary about how we’ve gotten to this point, where citizens from new political subjectivities are experimenting with organisational models in order to manage institutions. The documentary features people linked to various social movements and the new municipal “confluence platforms” that are taking root in Spain. They include: Gala Pin, from the Mortgage Victims Platform (PAH) and the municipal candidacy Barcelona En Comú; Pablo Carmona, from the Fundación de los Comunes and Ahora Madrid; Marta Cruells, from Barcelona en Comú; Francisco Jurado, from Democracia 4.0 and Open Euribor; and Guillermo Zapata, from the Patio Maravillas social center and Ahora Madrid. As they share a meal together, they discuss the various questions and issues that frame the historical moment, trying to push forward a new world that is opening up.

Produced by Guerrilla Translation under a Peer Production License.

Special thanks to Gilda Haas of Dr. Pop http://drpop.org/