Countess v Communist in Battle to Become Mayor of Madrid

Charismatic and tough as nails, the two ideologically opposite women are leading the showdown for the job of mayor of Madrid, in one of the most closely watched electoral battles to emerge from the political and social transformation gripping Spain. 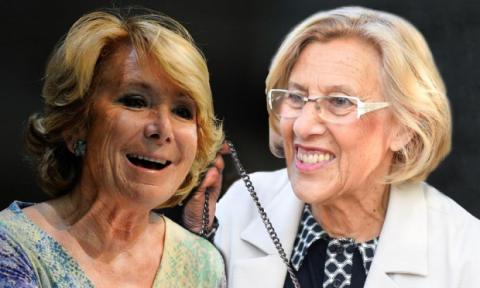 In one corner, a countess and veteran politician who is a devout admirer of the late Margaret Thatcher. In the other, a retired judge and former communist party member who describes herself as a “hugging grandma”.

Charismatic and tough as nails, the two ideologically opposite women are leading the showdown for the job of mayor of Madrid, in one of the most closely watched electoral battles to emerge from the political and social transformation gripping Spain.

For more than two decades, the People’s party has dominated Madrid’s political scene. Esperanza Aguirre, 63, a countess by marriage and one of the country’s most prominent conservative voices, was meant to coast to an easy victory in Sunday’s election, thereby ensuring the PP held on to Madrid in what looked to be a tumultuous year for Spanish politics.

Aguirre looked poised to do just that, until her 10-point lead evaporated in the week before the vote. Polls instead predicted a virtual tie with Manuela Carmena, 71, the veteran human rights activist at the helm of Ahora Madrid, a coalition of leftist groups that includes anti-austerity party Podemos.

On Sunday, as Spaniards chose the leaders of 13 regions and more than 8,100 municipalities, Madrileños cast a divided vote. The PP narrowly won the election, earning one more seat in the assembly than Ahora Madrid. But they failed to win a majority, meaning Ahora Madrid could join forces with the Socialists to form a coalition born from the ashes of the Indignado movement.

Conversations have begun across the country about the coalitions and pacts needed to govern. The PP remained the most popular party in the regions, capturing 27% of the vote, but it lost its absolute majorities in eight regions, including its historical strongholds of Madrid and Valencia.

The PP lost 2.5m votes compared with the local elections of 2011, suggesting its message of an economic rebound was drowned out by the lingering effects of austerity, double-digit unemployment and a string of corruption scandals. Instead, national newcomers Podemos and Ciudadanos firmly established themselves on the Spanish political scene, and will likely hold the balance of power in most regions as Spain ushers in a new era of political coalitions and compromises.

In the Spanish capital, the close result for two ideologically distinct political parties reflected the large divide that exists within the city. During the campaign, Aguirre emphasised her experience as a politician, pointing to her stints as president of the country’s senate, education minister and head of the Madrid regional government.

She promised to defend businesses, lower taxes and revise fines handed out by the city. She took aim at homeless people and demonstrations, explaining that they were chasing away tourists, and promised to carry out an in-depth study exploring why people “are permitted to live on the streets”.

She lashed out at Ahora Madrid’s association with Podemos. “If Podemos is the most voted party in the general election in Spain, it will be the last time we vote freely,” she said. “After that we will vote, but like they do in Cuba.”

As Madrid’s mayoral elections loomed, Carmena was approached by friends within Podemos to run. The former lawyer for the labour movement under Franco and UN human rights rapporteur was settling into retirement, blogging on justice issues and founding a co-op that sells baby clothes sewn by prisoners. She initially declined to run, citing her age. But news that Aguirre was running prompted her to accept the challenge. “What worries me most is the possibility that someone who has done so much harm to democracy and who is entangled in corruption scandals could take over the city council,” Carmena told news website Diariocrítico during the campaign, referring to the two former aides of Aguirre who have been named as suspects in corruption cases.

Carmena said the foremost priority of Ahora Madrid was to make Madrid a more equal city. “It’s scandalous that in Madrid there are two distinct worlds,” she said, contrasting neighbourhoods in the city where the unemployment rate sits at 30% with others at 6%. Ahora Madrid’s participatory platform also promises to take a tough line on corruption, suspend home evictions and slash the mayor’s salary by more than half.

Carmena had initially favoured the idea of all leftist parties, including the Socialists, rallying behind one mayoral candidate to run against Aguirre. “I was speaking with the president of Uruguay, the señor Mujica, and he told me that you have to keep in mind the importance of uniting the left in its diversity,” she said.

Her comments suggest a pact with the Socialists could be a possibility, but the clock is ticking; according to El País, any alliance would have to be formed and voted on within the next 20 days, otherwise power defaults to the party with the most votes.

Aguirre and Carmena said they would stay on regardless of whether they were mayor or leading the opposition.