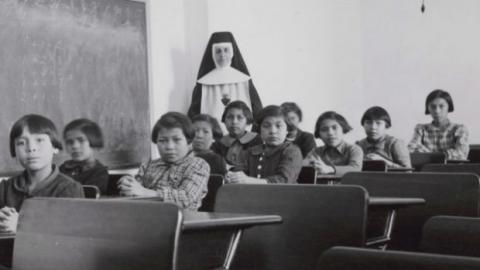 A group of female students and a nun pose in a classroom at Cross Lake Indian Residential School in Cross Lake, Man., in a February 1940 archive photo. Local healers say survivors and their children are facing waits for healing and counselling services., Library and Archives Canada/Reuters

Canada’s now defunct policy of removing aboriginal children from their families and schooling them in church-run institutions amounted to “cultural genocide,” according to the findings of a government-sponsored report into a century-long system that ended only in the 1990s.

After spending more than five years gathering the testimony of nearly 7,000 former residential school students, the Truth and Reconciliation Commission released on Tuesday a summary of its study of the country’s system of forcibly assimilating its indigenous populations

The commission was launched in 2008 by Prime Minister Stephen Harper to study the effects of Indian residential schools and their systemic attempts to erase First Nations culture and languages.

The schools date to the late 1870s and continued until the last one shuttered in 1996 in Saskatchewan province.

More than 150,000 indigenous individuals — First Nations, Métis and Inuits — were taken from their homes and sent to the schools, run by churches on behalf of the federal government, where they were barred from speaking their Native languages and performing their cultural and spiritual practices.

Many were also prey to “sexual and physical abusers” in school administrations, the report found. An estimated 80,000 former residential school students are alive today, according to commission estimates.

The commission published 94 nonbinding policy recommendations, directed at all levels of government and society. The study even called on the pope to apologize for the Catholic Church’s role in running some of these schools.

The recommendations to the Canadian government include helping aboriginal communities establish their own child-welfare agencies and keep “aboriginal families together where it is safe to do so.”

A number of commission’s measures were designed to ensure a high quality of education for aboriginal students on and off reserves and promote language rejuvenation programs.

Additionally, the commission is set to establish a lasting resource center to continue researching the effects of the schools.

But activists from indigenous rights movement Idle No More (INM) say the commission’s report cannot possibly be enough while the government is still disregarding the rights of Canada’s indigenous populations.

“The government cannot talk about reconciliation while the violation of indigenous rights, land theft and violence continues,” said Sheelah McLean, an organizer for INM, which launched in 2012 to address issues of environmental degradation that the group says encroach on a constitutional First Nation right to natural resources.

The report will serve only to “confirm what many people already know about the violence of colonialism and residential schools and should incite outrage in Canadians who did not know,” McLean said.

Still, Bellegarde sees the value in the release of testimony from residential school survivors. He said at a press conference on Monday that it is important to recognize their suffering in order to move forward in dealing with social ills traced back to the schools.

By better understanding their experiences, Canadians “will be more open to bring about real reconciliation,” he said.

In order to do that, he added, Canadians must first “rid themselves of ... misconceptions about indigenous peoples, discriminatory or racist attitudes that may exist” and allow room for positive attitudes.

“At one time, we had a good relationship and partnership through the fur trade and everything else,” he said. “And then it just went off the rails. So we’ve got to deal with all of that.”

Most of Canada’s Indian residential schools, modeled after U.S. Indian industrial schools of the period, were shut down in the 1970s.