Okinawans Want Their Land Back. Is That So Hard to Understand?

Living in the USA where people learn world geography through frequently fought overseas wars, Americans are accustomed to reading about places where we've fought wars - Vietnam, Iraq, Afghanistan. But one formerly war-ravaged part of the world most Americans don't think much about is Okinawa. What's it like to have 20 percent of your small, crowded island home occupied by more than 32 foreign military bases and some 50 restricted air and marine military training sites.

June 8, 2015 Jon Letman Truthout
Printer friendly
Okinawans Want Their Land Back. Is That So Hard to Understand? Published June 8, 2015 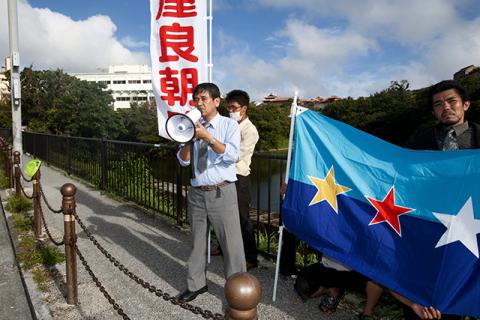 Chosuke Yara, the head of the Ryuku Independence Party, speaks in Naha, Okinawa, Japan, June 21, 2013. Although it accounts for less than one percent of Japanese territory, Okinawa is home to around 24,000 US military personnel.,Ko Sasaki/The New York Times

Living in a country where people learn world geography through frequently fought overseas wars, Americans are accustomed to reading about places where we've fought wars - Vietnam, Iraq, Afghanistan and elsewhere. But one formerly war-ravaged part of the world most Americans don't think much about is Okinawa.

Once the independent kingdom of Ryukyu, Okinawa was annexed by Japan through a series of events in the 1870s. At the end of World War II, exactly 70 years ago, Okinawa was the site of one of the war's most ferocious battles. Caught between the armies of Japan and the United States, Okinawans suffered unspeakable horrors during the "typhoon of steel." Viewed as expendable under imperial Japan, many Okinawans were killed outright by Japanese soldiers or forced to commit mass suicide. An estimated 120,000 Okinawans - between one-third and one-quarter of the population - died between March and June 1945.

The pain inflicted during the war and its aftermath underscored the Okinawan core value nuchi du takara ("life is precious") and left many Okinawans highly adverse to warfare and militarism. Despite this, Okinawa has remained one of the most militarized places in the world for more than 70 years, first under direct US military occupation and continuing after Okinawa's "reversion" to Japan in 1972.

Okinawa is one of the smallest of Japan's 47 prefectures, and although it accounts for less than one percent of Japanese territory, it is home to around 24,000 US military personnel, almost half of Japan's total, and is burdened with nearly 75 percent of US bases in Japan.

Consider what it's like to have 20 percent of your small, crowded island home occupied by more than 32 foreign military bases and some 50 restricted air and marine military training sites. The island of Okinawa, which has a population of 1.4 million, is 20 percent smaller than the Hawaiian island of Kauai, which has around 70,000 people. Given these numbers, it isn't hard to imagine why Okinawans are fed up with being (again) sacrificed by the central government in Tokyo to serve as Japan's primary military staging grounds (and, many point out, a potential target should a major war break out).

More war? No Thanks

Although it receives scant coverage in US media, the history of noise, crowding, toxic pollution, environmental harm, crime, sexual violence and serious military accidents in Okinawa has been well-documented.

Now, as a more assertive Japan reconsiders its commitment to pacifism, or at least nonmilitarism, as defined by its Constitution, Tokyo and the US are pushing hard for a new military base they say will "replace" Marine Corps Air Station Futenma, which sprawls across crowded Ginowan City on Okinawa.

Plans to "relocate" (or build an entirely new base depending who you ask) from the crowded South to the more sparsely populated and biologically diverse marine environment of Henoko Point and Oura Bay, have been evolving over the two decades since the gang rape of a 12-year-old Okinawan girl by three US servicemen unleashed new outrage. But the idea of a new and expanded base in the relatively pristine north has never been as unpopular as now.

Okinawa's Governor Takeshi Onaga, who was overwhelmingly elected on his promise to stop construction of the Henoko base, has been trying to get Japanese Prime Minister Shinzo Abe and other top officials to back off the base and find an alternative location outside of Okinawa prefecture.

After months of Abe seeming to avoid Onaga, the two finally met face-to-face two weeks before the prime minister embarked on a high-profile US visit that was crowned with a rare address to a joint session of Congress.

The Abe-Onaga meeting demonstrated nothing more than the depth of the rift between the two men. Moreover, Abe's address before Congress in April must have surely rubbed Okinawans sorely, as Abe spoke of the Japan-US alliance's "respect for human rights and freedom," while calling the partnership an "Alliance of Hope."

Two weeks after Abe's US visit, some 35,000 Okinawans rallied against the Henoko base plan. The very next day, an MV-22 Osprey - a hybrid aircraft widely unpopular in Okinawa over noise and safety concerns - crashed at a military air base in Hawaii, further igniting Okinawans determination to roll back the US presence.

All this occurred just as Gov. Onaga was preparing to take Okinawa's appeal against the Henoko plan to the United States, where he arrived on May 27. After meeting members of Hawaii's congressional delegation, Governor David Ige (who is himself of Okinawan ancestry) and members of the local Okinawan community, Onaga now brings his "no new base" message to Washington DC.

It's not clear how high up the pole the governor will get in Washington or how much sway, if any, his message will have with policy makers who are supposed to have oversight of overseas base construction. But if anyone is going to express solidarity with the people of Okinawa on the issue of bases, it should be American citizens. After all, the US military stands at the core of Okinawa's long struggle.

Not in My Backyard

Americans, when they are aware (not always easy when the US media willfully ignores issues relating to the impact of overseas US bases), can certainly understand why people wouldn't want a foreign military occupying their land.

Like Okinawans, Americans have demonstrated opposition to disruptive, destructive and dangerous military training and testing. Recent examples from Vermont and Alaska, to Washington State, Hawaii and elsewhere, show Americans share similar concerns to people in Okinawa. In consequence, at a minimum, we have a moral responsibility to be better informed and more engaged with how our military affects people around the world.

If the human rights, freedom and democracy that we so often speak of as American ideals and values mean anything at all, we owe it not just to people in Okinawa, but to ourselves, to live up to our own ideals. We must recognize that one more base on an island already overburdened by our military is not going to make us or them safer, and, in the long run, it may very well produce the opposite result.

And if that is too much to consider, ask yourself: How many foreign military bases would you accept in your hometown? How many foreign soldiers should the US allow to occupy its soil? If that number is zero, why should it be any different in Okinawa?

This article has been modified to reflect a correction regarding the size of Okinawa prefecture and its annexation by Japan.

Jon Letman is a freelance journalist on Kauai. He writes about politics, people and the environment in the Asia-Pacific region.