Chipotle will offer hourly employees benefits such as sick pay and tuition reimbursements starting July 1. The announcement comes as workers and advocates call for higher wages and benefits so that people in the restaurant industry can make a living without relying on public assistance. 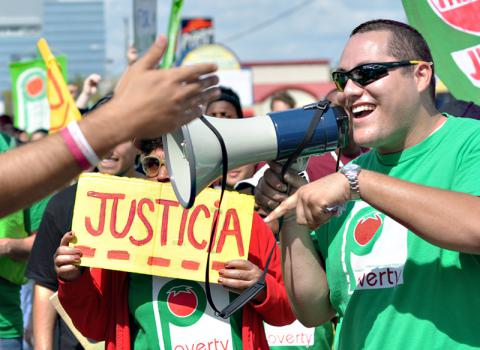 Chipotle Mexican Grill Inc. will start to give hourly employees benefits such as sick pay, paid vacations, and tuition reimbursements starting next month.

The company will reimburse 90 percent of tuition, books and fees up to the Internal Revenue Service’s limit of $5,250 per calendar year, according to NRN. The benefits will be offered to crew cashier and takeout specialists with one year of service, and to all hourly managers and salaried employees with no waiting period. Employees can find more information about Chipotle’s benefits on the company's website.

The announcement comes two months after Starbucks expanded its tuition reimbursement program, as previously reported by The Christian Science Monitor. In June 2014, the Seattle-based coffee chain started to cover two years of tuition at Arizona State University’s online degree programs for its employees. In April, Starbucks expanded that coverage to four years.

Chipotle’s move has been praised across the board, especially by advocates for restaurant workers. “In an industry where the overwhelming majority of hourly workers have no access to paid time off, this move represents important leadership by Chipotle,” said Ellen Bravo, chief executive of Family Values @ Work, a Wisconsin-based network that represents 21 coalitions across the country,  said in a press release. “It means Chipotle workers will no longer have to choose between a paycheck and their own health or that of a loved one. When the only option is to forego much-needed pay, many restaurant workers are forced to go into work sick, jeopardizing their health and also the health of their customers.”

The news also reflects the expanding conversation on inequality for hourly workers, especially in the restaurant industry. For the past few years, a nationwide movement of fast food worker strikes, called the "Fight For $15," has had a laser focus on raising wages. That movement has garnered support from New York State Governor Andrew Cuomo, who enacted a Wage Board to examine the fast food industry and make recommendations on increasing the minimum wage.

Recently, however, several nonprofits and advocacy groups have been arguing that more needs to be done for workers across the entire restaurant industry. The Economic Policy Institute has found that only 14.4 percent of restaurant workers receive health insurance from their employer, and just 8.4 percent of restaurant workers are included in a pension plan at their job. Unionized restaurant workers, on the other hand, are more likely to have some benefits: 41.9 percent of unionized workers receive health insurance and 31.6 percent have a pension plan. The quality of restaurant jobs can be improved through a combination of policy reforms and enactments, such as passing legislation requiring all employers to provide paid sick days, according to the nonpartisan think tank.

Low wages remain an issue. In April, Restaurant Opportunities Centers United released a report on the growing public costs to restaurant workers’ low wages. ROC found that while the industry is expected to grow by 10 percent by 2022, many restaurant workers receive wages that are not high enough for workers to provide basic needs for themselves and families. Inevitably, workers have to enroll in public assistance programs to make ends meet. Nearly half of the families of full-service restaurant workers are enrolled in one or more public-assistance programs, costing taxpayers more than $9 billion a year, according to ROC. At large full-service restaurants corporations like Darden and DineEquity, the costs for providing welfare to theirs employees are nearly $340 million and $450 million, respectively. In fact, the taxpayer cost for a single Darden-owned Olive Garden location is $196,970 annually.

Following Chipotle’s announcement, ROC also praised the company, citing its own research that 90 percent of restaurant workers do not receive sick days.

“Chipotle’s decision represents a significant step to help standardize paid sick days and other basic benefits for workers throughout the restaurant industry,” the nonprofit organization said.