Police Criminals and the Brutalization of Black Girls

The videotaped assault and sexual harassment of 14 year-old Dajerria Becton by a rampaging white police officer after a pool party in McKinney, Texas makes it clear that it continues to be open season on black women and girls. 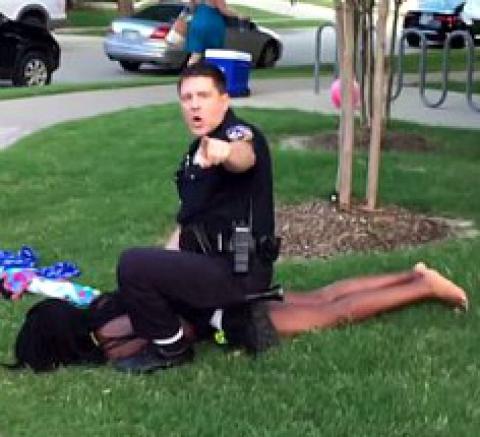 In Alice Walker’s short story “The Flowers,” a little girl happens upon the decomposing body of a lynching victim while she is out picking flowers.  Walker contrasts the light tranquility of the girl’s walk with the savagery of her discovery; suggesting that to be a black child is to never be shielded from the “adult” horrors of racist dehumanization. As the girl lays down her wreath of flowers Walker’s narrator declares that “the summer was over.”   Summer’s metaphoric end signifies the brutality of a segregated nation in which black children are already othered, racialized, and criminalized in the pools, parks and recreational spaces that define white childhood innocence.

The videotaped assault and sexual harassment of 14 year-old Dajerria Becton by a rampaging white police officer after a pool party in McKinney, Texas makes it clear that it continues to be open season on black women and girls.  In the video officer Eric Casebolt grabs, straddles and violently restrains Becton while she is lying face down on the ground in a bikini.  Ignoring her cries of pain and anxiety, he sadistically sits on her back while handcuffing her.  Casebolt then pulls a gun on a few young people who attempt to intervene.  Some of the good white citizens of McKinney have reportedly praised Casebolt’s thuggery.

The assault of Becton is an enraging reminder of the particular brand of sexual terrorism black women routinely experienced in the Jim Crow South at the hands of white law enforcement and ordinary white citizens.  In her important book, At the Dark End of the Street, Danielle McGuire chronicles how institutionalized sexual violence informed black women’s civil and human rights resistance.  Even as they were eclipsed in the mainstream civil rights movement by charismatic black male leaders, black women activists like Ida B. Wells, Recy Taylor, Claudette Colvin and Endesha Mae Holland drew on their experiences with sexual terrorism to galvanize black women organizers around the nexus of gender, race and class apartheid.

The McKinney incident underscores how even within the context of “recreation,” “normative” gender boundaries that automatically “feminize” young white women do not exist for young black women.  Little black girls can never occupy the space of carefree, feminine innocence that little white girls expect as their birthright.  They can never rely on the damsel in distress image to “rescue” them from American-as-apple pie state violence.  According to the African American Policy Forum, black girls are suspended six times more than white girls and routinely vilified as aggressive menaces in school classrooms. It goes without saying that a black male police officer captured on video brutalizing and sitting on a bikini-clad teenage white girl would have been lynched before he returned to his precinct. It is tacitly understood that the scantily clad bodies of teenage white girls are sacrosanct cultural commodities; publicly off limits to law enforcement, privately available for the consumption of white heterosexist patriarchy.  Within the public domain these are the bodies that must be protected at all costs—from potential violation by predator white men and from the imagined, ever present “threat” of violent encroachment by men of color.

Socialized to see black women as chattel, thuggish police officers play on misogynist white supremacist stereotypes to justify their criminality under the color of law.  After months of community agitation, last summer’s heinous videotaped beating of Marlene Pinnock, a middle age African American homeless woman, by a white California Highway Patrol officer led to his firing.  Nonetheless L.A.’s black female district attorney has not seen fit to file criminal charges against him.  And the recent conviction of white female LAPD officer Mary O’Callaghan for assault—rather than involuntary manslaughter—in the death of 35 year-old Alesia Thomas is an anemic substitute for justice.

The McKinney police thug has been suspended from duty but there should be a national push for prosecution.  As with police beatings and murders of men of color, there is no special dispensation for black women victims of state violence, no “weaker sex” clause that mitigates the brutalization of black women’s bodies as hypersexualized policed space.  For black girls in the hallowed idyllic spaces that enshrine the privileges of white youth, summer is always over.

Sikivu Hutchinson is an author and educator.  She is a senior intergroup specialist for the Los Angeles County Human Relations Commission and founder of the Women’s Leadership Project (WLP), a high school feminist mentoring program for girls of color in South L.A. She is the author of Imagining Transit: Race, Gender, and Transportation Politics in Los Angeles, Moral Combat: Black Atheists, Gender Politics, and the Values Wars and Godless Americana: Race and Religious Rebels. She is also a contributing editor for The Feminist Wire and a visiting scholar at USC’s Center for Feminist Research.  Her forthcoming novel, White Nights, Black Paradise, on Peoples Temple and the Jonestown massacre, is due in the Fall of 2015.