Today, things are as tense on the island as they have been in years. Within days, the Dominican government is expected to round up Haitians — or, really, anyone black enough to be Haitian — and ship them to the border, where they will likely be expelled. The government has described it, in terms chillingly reminiscent of the Holocaust, as a "cleansing" of the country's immigration rolls. 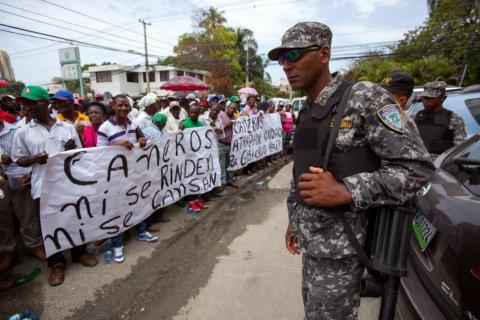 Hundreds of cane cutters of Haitian origin demonstrate in front of the Haitian Embassy in Santo Domingo, Dominican Republic, on June 1., Orlando Barría/EPA

There is an artificial line that splits the island of Hispaniola in two. On one side is Haiti, and on the other is the Dominican Republic.

There was a time when that split between the two countries was drawn with blood; the 1937 Parsley Massacre is widely regarded as a turning point in Haitian-Dominican relations. The slaughter, carried out by Dominican dictator Rafael Trujillo, targeted Haitians along with Dominicans who looked dark enough to be Haitian -- or whose inability to roll the "r" in perejil, the Spanish word for parsley, gave them away.

The Dajabón River, which serves as the northernmost part of the international border between the two countries, had "risen to new heights on blood alone," wrote Haitian American author Edwidge Danticat.

"The massacre cemented Haitians into a long-term subversive outsider incompatible with what it means to be Dominicans," according to Border of Lights, an organization that commemorated the 75th anniversary of the massacre in 2012.

Today, things are as tense on the island as they have been in years. Within days, the Dominican government is expected to round up Haitians — or, really, anyone black enough to be Haitian — and ship them to the border, where they will likely be expelled.

The government has described it, in terms chillingly reminiscent of the Holocaust, as a "cleansing" of the country's immigration rolls.

Cassandre Theano, a legal officer at the New York-based Open Society Foundations, said the comparisons between the Dominican government's actions and the denationalization of Jews in Nazi Germany are justified.

"We've called it as such because there are definitely linkages," she told The Washington Post this week. "You don't want to look a few years back and say, 'This is what was happening and I didn't call it.' "

In other words, 78 years later, these are the fruits of Trujillo's bloody campaign to sow anti-Haitian sentiment in the Dominican Republic.

"The root cause is discrimination; it's really a long-standing discrimination against those of Haitian descent," said Marselha Goncalves Margerin, ‎advocacy director for the Americas at Amnesty International. "The Dominican Republic has not been able to establish a strong policy to combat it."

It also has its roots in little-known American history, Danticat, the Haitian American author, noted in an interview last year:

One thing that is not mentioned as often is that early in the 20th century (1915 to 1934 for Haiti, and 1916 to 1924 for the D.R.), the entire island was occupied by the United States. Then again, in the D.R. in the 1960s, Trujillo — who not only organized a massacre, but wiped out several generations of Dominican families — was trained during the occupation by U.S. Marines and put in power when they pulled out. Same with the Haitian army that terrorized Haitians for generations. It is not a matter of blame but a matter of historical record.

The discrimination starts with the long-standing practice of not recognizing as Dominican people of Haitian descent who were born in the Dominican Republic. Instead, they are lumped in with a second group: Haitian migrants who came to the country -- sometimes brought by force -- to work in the sugarcane fields.

Then, in 2013, the country's Constitutional Court ruled that no longer would people born in the Dominican Republic automatically be considered citizens. The rule, the court decided, would retroactively apply to anyone born after 1929.

The change overwhelmingly affects Haitians and people of Haitian descent. And its impact reaches back generations.

In reality, Theano said, "cleaning" the Dominican registration rolls to root out fraud and non-citizens entails identifying Haitian-sounding names, then forcing Haitian migrants and Dominicans of Haitian descent to prove that they are citizens.

The deadline for procuring the documents necessary to prove citizenship if you were born in the Dominican Republic lapsed in February. And on Wednesday, the deadline for migrants to "regularize" their statuses will also expire.

What happens Thursday is unknown.

"People are concerned that they will be indiscriminately targeting people who are darker skinned, back Dominicans, Dominican Haitians and Haitian migrants," said Theano. "There is no science behind how they pick people.

"They literally look at you and decide whether you fit the profile or not."

As the deadline looms, long lines and violent clashes have created tense scenes outside of the Ministry of the Interior.

The Dominican government has created a maze of rules and processes over the past 18 months to decide who gets to stay and who goes.

The complex web of rules, long waiting periods and, now, long lines have meant that some 200,000 Dominicans of Haitian descent have essentially been left stateless.

Also unclear is whether the government will immediately begin transporting people of Haitian descent to the border, or whether they will wait 45 days after the June 17 deadline expires, as government officials have also suggested.

The uncertainty is by design, Theano noted.

"I think it's the strategy of the government throughout this whole process," she said. "They are constantly referring to this as an immigration issue, when Dominican Haitians are not immigrants.

"It's a strategy to confuse people."

For now, human rights groups are tracking reports that the government has leased buses -- a sign that they intend to carry out the expulsions and deportations en masse. The government has also hired about 150 workers to inspect the papers of those sent to the border and retained 2,000 military personnel, Theano said.

The people impacted by the government's measures -- the ones left in a state of statelessness --  have no home on either side of the island. Not having an identification card to prove your citizenship or your legal status in the country makes life nearly impossible in the Dominican Republic.

"You can't even buy a cellphone without an identity card," noted Margerin.

And for people like Liliana Nuel, a 21-year-old Dominican woman who has lived in the country her entire life and has given birth to three children there, going back to Haiti is simply not an option.

"I have never been to Haiti," Nuel told Amnesty. "If tomorrow they send me there I won't know what to do or where to go. I'm afraid that one day they will send me there, without my kids."

Abby Phillip is a general assignment national reporter for the Washington Post. She can be reached at abby.phillip@washpost.com. On Twitter: @abbydphillip