Former CA Governor Schwarzenegger once called it “stuff [I] used to blow up in the movies.” America’s infrastructure—highways, railways, bridges and thruways—now face a doom worse than the Terminator ever imagined: destruction from the rust, decay and corrosion of trillions of dollars worth of old tracks, canals, ports, structures and causeways that carry our trade and traffic all over the United States. Every $1 billion of federal investment creates about 13,000 jobs. 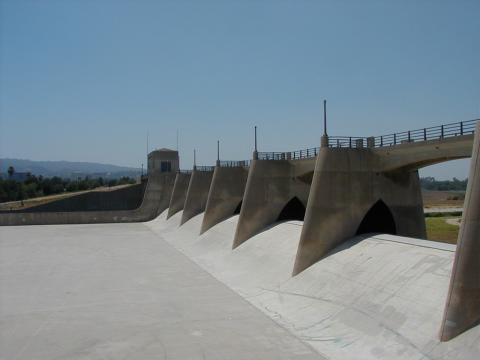 Sixty-one thousand bridges, located mostly in local jurisdictions, are potentially dangerous. That U.S. rail systems are about $60 billion behind on maintenance (as of five years ago) was tragically illustrated by the recent fatal Pennsylvania Amtrak disaster, blamed on the delayed installation of a new control system. Last month’s burst oil pipeline in Santa Barbara County also underscored the deterioration of even private infrastructure. Both tragedies demonstrated that continued neglect comes with a fast rising cost in both money and lives. For more than a decade, interests ranging from politicians to the American Society of Civil Engineers (ASCE) to construction unions to nationwide development firms have sounded the alarm.

Last month these interests had their say at the nonprofit RAND Corporation’s Santa Monica campus. The gathering’s nominal subject was “Fast Forward to the Connected City.’’ But the reality, as several panelists admitted, is that most U.S. cities are a long way from electrical smart grids and sensor-driven streets carrying self-driving autos through LEED Green Building-filled downtowns. Cities more often are struggling instead to maintain crumbling streets and elderly overpasses, bursting water mains and hemorrhaging sewer lines, erratic street lighting and inadequate rail systems—infrastructure that is often several generations past its sell-by date. The conference was called to talk about the bright urban future, but the dim present kept getting in the way.

Former Pennsylvania governor Ed Rendell, widely known for once referring to the U.S. as “a Nation of Wusses,” took the lead on the topic by asking, “How many tragedies will it take?” America, he contended, just doesn’t want to face the grim infrastructural reality. As it happens, Rendell is a co-chair of Building America’s Future, a Washington-based promoter of infrastructure reconstruction, with plenty of skin in the infrastructure game. He quoted a report from ASCE foreseeing that, minus infrastructure investment, 877,000 jobs could be lost and economic growth would be stifled to the tune of $3.1 trillion by 2020. Avoiding this will require an investment of about $1.7 trillion by that year, the report said.

Today the Highway Trust Fund is about to run dry, and both houses of Congress are deadlocked over what kind of short-term funding will keep it alive for a few months. There have been more than 20 doses of short-time congressional funding so far, which makes long-term planning almost impossible.

For Americans concerned with high unemployment and under-employment, however, that $1.7 trillion infrastructure rehab figure should shine like a golden mountain on the economic horizon.

For every $1 billion increase of federal investment in transportation infrastructure, an estimated 13,000 jobs are created, according to the U.S. Department of Transportation. Simple arithmetic suggests that at this rate, a $1.7 trillion infrastructural investment could produce more than 2.2 million new jobs—most of them temporary, but all salaried in the well-paid construction trades. (There were 8,674,000 jobless Americans in May.)

But that’s pretty much a dream at this point. It’s unlikely that the GOP-dominated Congress, determined to cut spending and block new taxes, is going to do any such thing. Yet in 2008, the Congressional Budget Office calculated that well-targeted government spending of $185 billion a year on infrastructure would generate economic and social benefits that would exceed that sum. These benefits would include training and employment of many thousands of new workers and apprentices whose salaries would stabilize families and neighborhoods, as well as build local, state and national economies. All the while creating myriads of safer and more efficient bridges, rail lines, roads, utility grids, canals and ports.

To wield a cliché, it sounded like a long-run win-win. And, six years ago, the American Recovery and Reinvestment Act demonstrated this when its $600 billion in infrastructure spending helped to stop a depression. But how would such a program now be funded nationally?

Perhaps the answer can be found locally.

Los Angeles City and County have been collaborating since 2008 on just such a program, the Construction Careers Policy (CCP), whose expected total investment will total $12 billion when the current involved projects are completed.

Sparked in 2008 by the Los Angeles Alliance for a New Economy (LAANE) and the L.A. Building Trades Council, in response to the recession’s employment crises, a coalition of community and labor leaders successfully promoted a Construction Careers Policy at the Community Redevelopment Agency-Los Angeles. The CRA has since closed, but not before CCP completed $690 million worth of housing and expanded. “It doesn’t just build jobs,” said former LAANE Deputy Director Vivian Rothstein in an interview. “It addresses community needs.’’ (Disclosure: I happen to be married to Ms. Rothstein )

The CCP is involved in nearly $10 billion in Metro rail construction. According to Metro, nearly half the jobs in three current projects could fall under the program.

“It’s the first program of its kind—Numero Uno, Ichiban” said Metro’s Manager of Diversity and Economic Opportunities Miriam Long, in a phone interview: “We are very proud of it.”

These union jobs include apprenticeships starting at $16.52 an hour, and targeted positions for disadvantaged workers. According to a LAANE report, the program has created $129 million in wages for disadvantaged workers and a total  $749 million in economic activity. Essential to this were Project Labor Agreements between contractors and construction unions, requiring prevailing wages and benefits, in exchange for a guarantee against labor interruptions. Another requirement is opening jobs to specifically identified underserved communities.

“[CCP] fought for many years to ensure public investment created good construction jobs for communities most impacted by poverty and unemployment,” Jackie Cornejo, who is Project Director for LAANE’s Don’t Waste LA campaign, said in an e-mail. “We also wanted to make sure that we increased access to apprenticeship programs for individuals facing real barriers to employment.”

These projects will cover more than 56,700 workers through 2017, Cornejo estimates.

“Metro’s agency-wide Project Labor Agreement paves a new way for how major construction projects can, should and will be built across the nation. Here in Los Angeles, we first implemented this policy on the Crenshaw/LAX Line, which runs through the heart of South Los Angeles. Communities need to share in the benefits of public works investments. Almost 20 percent of the line has been completed, and so far 60 percent of workers have come from surrounding targeted ‘economically  disadvantaged areas.’ We are not just building a rail line, we are rebuilding a community by making real employment and training opportunities available to those who actually reside in this area.”

So that’s how things have worked in L.A. County. Let’s imagine scaling that program for a national CCP, focused on renewing infrastructure. And at the same time, pushing poverty out of thousands of America’s most challenged communities.

Marc Haefele is a commentator on KPCC’s Off Ramp program and has written for the New York Times and Los Angeles Times.