The Postal Service violated the law when management entered into the deal with Staples without first bargaining with the union, the complaint alleges. 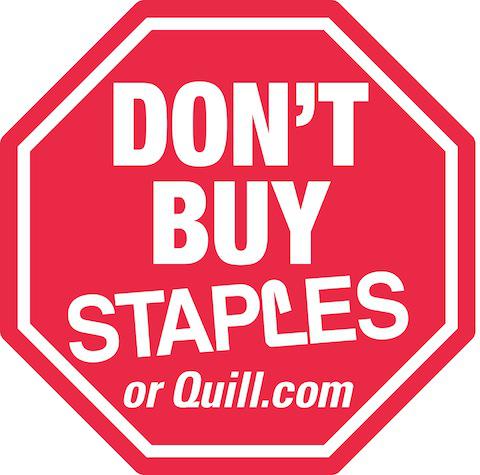 07/01/2015 - In a major blow to the Postal Service’s deal with Staples, Region 5 of the National Labor Relations Board (NLRB) has issued a complaint charging that the USPS illegally subcontracted work to the office-supply chain and ordering the agency to return the work that existed on July 31, 2014, to the APWU bargaining unit. A hearing is scheduled before an NLRB Administrative Law Judge on Aug. 17.

If the NLRB sustains the allegations in the complaint, it could effectively end Staples’ foray into the mail business.

“In the meantime, the boycott of Staples and its online subsidiary, Quill.com, is still on,” APWU President Mark Dimondstein declared. "Let's turn up the heat!"

The Postal Service violated the law when management entered into the deal with Staples without first bargaining with the union, the complaint alleges. The Postal Service also engaged in “bad faith bargaining” by refusing to provide the APWU with information and violated the subcontracting provisions of Article 32 of the Collective Bargaining Agreement, the complaint says.

“This ruling represents an important step forward in the battle against the privatization of our nation’s public Postal Service,” Dimondstein said.

“But it is not simply the result of strong legal arguments,” he said. “Every APWU member and supporter who passed out flyers outside Staples stores can claim a piece of this achievement,” he said. “Every person who organized their friends and neighbors to boycott Staples and warned them about the dangers of allowing a private company to take over the mail helped us get to this point.”

The Staples saga began in the fall of 2013, when the Postal Service instituted a pilot program that placed mini-post offices in more than 80 Staples stores in four geographic areas of the country. The APWU demanded that the postal counters in Staples stores be staffed by postal employees.

When the Postal Service refused, the union launched a Stop Staples campaign, featuring rallies and protests outside Staples stores that were aimed at educating consumers about the secretive, no-bid deal. The APWU objects to the program because it “privatizes the retail operations of the public Postal Service; transfers living-wage, union jobs to low-wage jobs, and compromises the safety and security of the U.S. mail,” the union wrote.

After months of protests, in April 2014, the union called for a boycott, urging consumers: Don’t Buy Staples!

The AFL-CIO endorsed the boycott, and many labor organizations and other groups embraced it. The support of the American Federation of Teachers (AFT) and the National Education Association was critical, because school supplies account for approximately 30 percent of Staples’ revenue.

Just days after the AFT voted to endorse the boycott in July 2014, postal management and Staples announced an end to the pilot program, apparently expecting the APWU to end the Don’t Buy Staples movement.

But the union didn’t call off the protests.

Although the campaign was successful in killing the pilot, the Postal Service and Staples were attempting to pull off a sneaky maneuver:  They converted the Staples deal to the Approved Shipper program, effective Aug. 1, 2014. The principal difference was that the Approved Shipper program permitted Staples to sell the products of competitors, such as UPS, in addition to Postal Service products.

“This attempt at trickery shows that the ‘Don’t Buy Staples’ movement is having an effect,” Dimondstein said at the time. “Staples and the USPS are changing the name of the program, without addressing the fundamental concerns of postal workers and postal customers.” In response, the Postal Service upped the ante and began to expand the Approved Shipper program to all Staples stores – more than 1,000 of them – around the country.

The union has asked the NLRB to seek a preliminary injunction in court to force the Postal Service to cancel the Approved Shipper deal with Staples immediately. The request is pending before Region 5 of the NLRB.

The National Labor Relations Board will hold a hearing next month to determine whether a deal between the United States Postal Service and Staples Inc. violates a collective bargaining agreement with the American Postal Workers Union.

Staples and the Postal Service launched a pilot program to offer mail services in 82 of the retailer’s stores in 2013. The office-supply retailer ended the pilot a year ago and became an approved shipper for the agency. Under both programs, Staples employees staff counters inside the office supply stores and offer a variety of Post Office services.

The union, which represents 200,000 postal workers, has publicly criticized the partnership and said it amounts to privatization of a basic government function. The union contends that the Postal Service illegally subcontracted work to Staples and violated its exclusive labor contract with the agency.

The union filed charges against the Postal Service with Region 5 of the National Labor Relations Board in Baltimore in November. The regional office subsequently conducted its own investigation and found that the union’s claims held merit, according to a spokeswoman for the National Labor Relations Board. The board’s regional director filed a complaint against USPS late last month and ordered a hearing.

“This highlights that the Postal Service was ignoring its commitments to its workers and the union that represents them,” said Mark Dimondstein, president of the American Postal Workers Union. “I’m not calling it a win yet, but it’s a step forward in the right direction.”

Staples pointed out that it isn’t the only retailer to offer Post Office services in its stores.

More than 500 Staples stores and about 6,000 total retail outlets in the US, from small businesses to national chains, participate in the current Postal Service program, said Kirk Saville, a Staples spokesman.

A spokesman for the Postal Service declined to comment while the case is under litigation.

An administrative law judge from the National Labor Relations Board will hear the case at 10 a.m. on August 17 in Washington, D.C.