In anticipation of their current contracts expiring on August 1st, CWA and IBEW recently announced that an overwhelming majority of their members voted to authorize a strike in case labor and management fail to reach fair contracts. 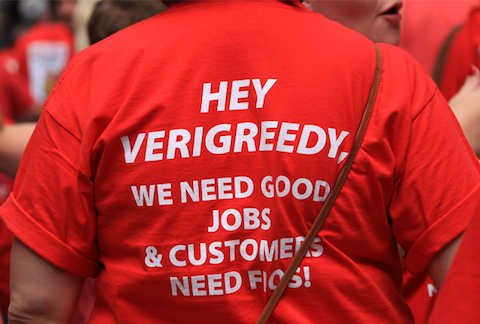 A crowd of thousands rallied outside of Verizon headquarters in New York City on Saturday, creating a sea of red t-shirts and picket signs that flooded the streets of lower Manhattan. Their cause: Making sure Verizon agrees to fair contracts with its 39,000 employees, who are represented by the Communications​ Workers of America (CWA) and the International Brotherhood of Electrical Workers (IBEW).

During the last round of contract negotiations in 2011, Verizon came to the table with a long list of demands that would have undone decades of hard-won progress – from freezing pensions and increasing employee contributions toward health coverage to ending all job security provisions and allowing the company to outsource as many jobs as it wanted. Ultimately, after a two-week strike and 16 months of sustained, escalating mobilization by union members and allies like Jobs With Justice, Verizon employees successfully negotiated eight percent raises and fought back the worst of the corporation’s demands. When Verizon came to the table this summer with an eerily similar opening proposal, it was clear that the telecom giant has a long-term agenda to cut good union jobs, decrease its menu of services they offer to many of our communities, and offshore and outsource work overseas and to contractors.

In anticipation of their current contracts expiring on August 1st, CWA and IBEW recently announced that an overwhelming majority of their members voted to authorize a strike in case labor and management fail to reach fair contracts. But Verizon is already doing everything it can to avoid new contracts that guarantee decent jobs for its employees. As Verizon employees raise their voices against corporate greed, it’s important that more of us stand up for an economy that works for everyone. If Verizon gets its way, we’re allowing corporate CEOs to rewrite the rules in their favor yet again, instead of ensuring that more of our friends and neighbors can hold the line for family-sustaining pay and benefits.

As you see the debate playing out in the press or in your community, here are five reasons to back Verizon’s employees in their negotiations with the telecommunications giant:

The corporation raked in $9.6 billion in profits last year. And from 2010 to 2014, Verizon executives made more than $249 million. Apparently, Verizon corporate bosses are unsatisfied with their massive profit margins. In negotiations thus far, Verizon has asked its loyal workforce for huge cuts to retirement security, further increases in employee healthcare costs, and elimination of job security. Not only does Verizon want to put less money towards its employees’ health and retirement; they also want the power to fire staff whenever they’d like. Verizon has yet to respond to a single proposal from its employees’ unions.

Since the corporation is refusing to put forward reasonable bargaining terms, Verizon knows it’s possible that its employees will strike again. In preparation, the company is training 15,000 non-union employees to take over in the case of a work stoppage. Verizon has also given its non-union employees a mobile surveillance app that can monitor union members throughout negotiations. With the device, employees can take geo-tagged photos of union members and write so-called incident reports that will be forwarded immediately to Verizon corporate security. Essentially, it’s a tattletale app with the sole purpose of intimidating union activists.

3. Verizon wants to get rid of good union jobs and outsource instead.

Just like in 2011, Verizon wants its employees to give them the thumbs up to contract out work, replacing good, hometown jobs with cheap labor. Unionized Verizon employees have earned strong wages and benefits, sufficient to lead a decent life and support a family. But since 2005, the percentage of unionized Verizon employees has dropped  from nearly 70 percent to less than 30 percent. Evidently, the corporation doesn’t want to be in the business of providing good, community jobs anymore, as they’re looking to outsource once again, threatening the job security of their employees.

Consumer demand for high-speed Internet is higher than ever. Several years ago, Verizon got tax breaks and rate hikes in exchange for expanding FiOS, its high-speed Internet, phone, and video connection, throughout the Northeast. But in 2012, Verizon announced it would no longer be expanding FiOS, leaving customers in many places without access to high-speed Internet. Why? Some believe it’s because the women and men who build and maintain the FiOS lines have good union jobs that cost the company more money. That’s right – Verizon refuses to increase its FiOS customer base because the company doesn’t want more people to have a decent job and a decent life.

The company has also been accused of redlining poor and minority communities. In New York, the FiOS expansion was concentrated in affluent city suburbs while low-income urban areas were left behind. Other communities that have been excluded from the FiOS expansion include Bethlehem, PA, Baltimore, MD and Roanoke, NC. Verizon is now trying to get out of the business of landlines all together, which will mean poorer service and even fewer options for many customers, especially in poor and rural areas that are already on the wrong side of the “digital divide.”

“On the one hand, Verizon refuses to build its high-speed FiOS network in lower-income areas. And on the other, they are systemically ignoring maintenance needs on their landline network,” said Ed Mooney, Vice President for CWA District 2-13, which covers Pennsylvania to Virginia. “This leaves customers at the mercy of a cable monopoly or stuck with deteriorating service while Verizon executives and shareholders rake in billions.”

5. Verizon has a long history of ripping off taxpayers through tax evasion.

Verizon isn’t just looking to cut costs by slashing benefits and eliminating jobs; the giant corporation is also taking money from taxpayers. From 2008 to 2013, Verizon received a tax refund of$732 million from the IRS, which resulted in a corporate income tax rate of -2 percent. That’s right, a negative income tax rate! Verizon is also culpable of stashing money abroad to avoid paying income taxes. In 2012, Verizon stored $1.8 billion in offshore tax havens.