The barriers to organizing adjuncts are real and difficult to overcome. We often don’t know our coworkers, we are decentralized and our lack of security creates a pervasive fear among adjuncts. However, the only way that we will be able to fight for increased pay, greater job security and a voice in the college is by working collectively. 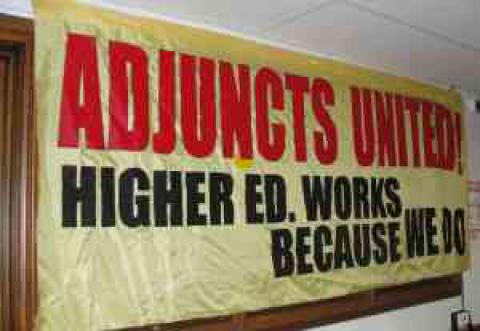 On my first day teaching at the Community College of Allegheny County in Pittsburgh, I was wracked with the normal anxieties of a new college instructor: What if the students don’t like me? What if my lesson plan falls apart? Where exactly is the copy machine? What if my hair looks stupid?

However, as I adjusted to life as an adjunct instructor with a semester-to-semester contract, my questions quickly changed: What if my classes don’t run and I can’t make rent? How do I get from class to my next job in time? How do I meet with students without real office space?

After years of organizing, we have won our union election, and hopefully I can get back to worrying more about lesson plans than my financial stability. On July 14, 86% of my colleagues voted to form a union with the American Federation of Teachers (AFT), effectively unionizing over 800 instructors across CCAC’s four campuses. And while this is only the first step before we head to the bargaining table, it represents a huge victory for academic labor and contingent faculty.

The road to the election was long, starting through casual office discussions in 2012. From then, we began to form a relationship with the United Steelworkers, who were then organizing adjunct faculty at Point Park University and Duquesne University. After some discussion, we then chose to be represented by the AFT, which has represented the full time faculty at CCAC since 1971. With the help of our full time colleagues, we then put our nose to the grindstone and tracked down hundreds of our coworkers scattered throughout Western Pennsylvania. Two years and countless phone calls, house calls and hallway conversations later, we have full recognition as members of a union.

Although the adjuncts at CCAC have tried to organize in the past, our drive flourished because of a few key factors. First, the changing political climate over the past few years has brought adjunct labor issues to the front of many people’s minds. Especially in Pittsburgh, the death of Margaret Mary Vojtko at Duquesne University provided a tragic example of adjunct exploitation and kicked off a national conversation. As I spoke to my colleagues, they were aware of the larger picture and how the corporatization of higher education has marginalized faculty. Many instructors were excited to hear that we could band together to improve our working conditions and have a real voice in the life of the college.

Second, the national movement to unionize contingent faculty was instrumental in our organizing effort. The work of adjuncts in the Washington, D.C. area, St. Louis, Boston, Philadelphia and across the country provided us with valuable lessons as we talked to coworkers, community members and students over the past three years. The momentum of adjunct organizing inspired us as we watched our friends at Duquesne fight a hostile administration and as we followed George Washington University’s successes at the bargaining table. During the campaign, we were bolstered by messages from the United Academics of Philadelphia, who are fighting a tough campaign against the administration at Temple University. Throughout our union drive, the national movement showed us time and time again that unionizing was possible and essential to reclaiming our value as workers and educators.

Third, the support we received from the larger community was invaluable as we moved to the election. No one can live or organize in a vacuum. The full-time faculty union provided essential support to us, and the members have helped us build a strong working relationship with the college’s administration. Amazingly, CCAC’s administration has not thrown any roadblocks our way, choosing instead to respect the voices of faculty at the college. This spirit of collaboration has been aided at every step of the way by our team of AFT organizers, other union allies and even friends in the administration. This coalition of supporters will be essential as we fight for our needs at the bargaining table and work as members of the CCAC community.

The barriers to organizing adjuncts are real and difficult to overcome. We often don’t know our coworkers, we are decentralized and our lack of security creates a pervasive fear among adjuncts. However, the only way that we will be able to fight for increased pay, greater job security and a voice in the college is by working collectively.

We are teetering at the edge of major changes in the structure and future of higher education in the United States. Faculty—those of us who are most concerned with students' well being—must have a voice in creating a sustainable, just education system, both for us and future generations of students.

Of course, this is only the beginning. So far, we’ve only won the legal right to bargain collectively, and the real work of building a contract is only starting. However, the relationships we have built through the process will give us power to advocate for a stronger, sustainable and more just educational community. And hopefully, we’ll be able to help push the movement forward as other groups of adjuncts across the country seize power in their workplaces and make their voices heard.

Luke Niebler is an English adjunt instructor at Community College of Allegheny County, PIttsburgh, an activist among his coworkers and an academic. You can follow the CCAC adjunct movement at @CCAC_adjuncts