labor Why We Need a Universal Wage: Heather Shares Her Story About Tipped Work

People say that the restaurant industry in Portland is incestuous – that everyone’s worked with everyone else – but that’s because people keep switching jobs in search of the mythical balance of tips to hours to number of shifts to physical demand. 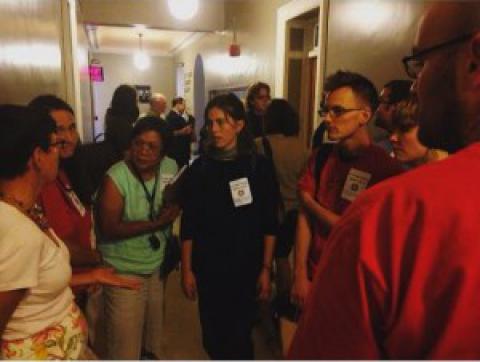 On July 20th, members of SMWC’s Work With Dignity Committee attended the Portland City Council’s workshop session on tipped credit and the new minimum wage ordinance. The ordinance needs to meaningfully include tipped workers by raising their base wage (the amount the employer actually pays hourly), as well as the minimum wage they have to earn up to once their tips are factored in.

Heather Foran is a tipped restaurant worker in Portland, and part of the Southern Maine Workers’ Center. Read her story to hear why it is so important that tipped workers are included in City Council’s minimum wage increase:

“I commend the City Council for its original move to raise the minimum wage for tipped workers. I think it represents a huge opportunity to take a step towards stability for people working in all sectors of the service industry.

Most people I’ve worked with in restaurants see themselves as temporary employees. There are a few self-proclaimed “lifers”, but especially in this city they seem to be few and far between. The people I’ve worked with are some of the most creative and passionate people I’ve ever known. When this city sells the image of itself as a cultural hub – who are the people that make up this “creative economy”? They’re the people serving the food, the coffee, the beer here. And because they are ambitious, talented, and creative – they rarely see themselves as sticking around the industry, as they’re anticipating the job, the school opportunity, the entrepreneurial idea, the music break that will get them out. Because of that constant hope, the question of what the physical, financial, or emotional impacts in the long term are minimized.

There is an amazing thing that happens in the restaurants that I’ve worked in – an intense, in-the-moment bonding that occurs. On a busy Friday night, it’s like the team on the floor versus the world. You dig in to support each other against the customer who tips badly because the food took too long, the chef’s verbal barrage when you have to transmit the request for a substitution, the physical stress of moving non-stop at high speed for hours. To me, its the immediacy of this camaraderie coupled with the fact that I have always seen my restaurant job as temporary that makes it so that I have been willing to accept inconsistent wages, unreliable hours, low-tippers or no-tippers, normalized sexual harassment and misogyny, a culture of alcohol and drug abuse, back pain and physical stress, as the usual hazards of the industry.

I have worked in restaurants owned by incredible employers who I respect immensely – in places where I believe in the food, and the mission, and the intention to value employees as much as possible. I have also worked in restaurants where I was told that servers should be “seen and not heard”, where our credit card tips were withheld for over a month (with individual servers owed over $1000 in back wages), where a male chef-owner threatened my job aggressively and publicly for forgetting to send an appetizer order in before the entrees, where a customer once told me that his food would taste better if I served it in a bikini, where I have been scared of the verbal abuse I would take if I walked into the kitchen and asked to change an order.

For three months out of the year , those “hazards of the job” are overshadowed by the possibility of making money. From mid-June to Labor Day, its easy to find 40+ hours of work a week at one restaurant, and working in medium to high end restaurants I averaged, during the week, probably somewhere around $15-20/hour. On weekends I could work 5pm-12pm and make $200 – $250. Throughout, the check I would get at the end of the week would equal somewhere around $120 – which always felt like a small bonus at the end of a crazy week. Despite working 40+ hours for those summer months, no restaurant owner is required to provide health insurance or sick days for their tipped employees.

After Labor Day, as everyone who lives here knows, tourists leave. The beginning of the other nine months out of the year weeknights slow down, shifts start getting cut during the week, if a person was newer to the restaurant they would be the first to lose their shifts. I would generally still expected to be available for whatever the manager scheduled me for (many restaurants schedule people week to week and it is often unpredictable what those hours will be) – making it a juggle to fit in other jobs. But instead of having 6 shifts a week I might get cut down to 4. Weekends generally stay busy – which is good, because those are the nights where I made the money I needed to pay my rent, my student loans, my other bills.

The week of Christmas to New Years was good as long as I worked those holidays. Through my twenties, I missed Thanksgiving, Christmas Eve, Christmas Day, New Years Eve and New Years Day with my family and friends more often than I made them, because those were the nights that as a server I could make the most cash- which was necessary to prepare for the rest of winter.

From January until early May, I could expect that my shifts would get cut again. If I once had 6 shifts a week during the summer, I might find that I only had 3 – and for one or two of them I could expect to “get cut” two or three hours into the shift because there would only be a few customers in the restaurant. After a six hour shift on a good night in the winter – I might walk with $50-60. On a bad night, I might walk with $6. My check, at the end of the week, would end up being something like $45. While the restaurant has been required to make my wages up to the minimum wage, they have no responsibility to maintaining the number of hours I work and so in my experience managers were often encouraged to cut people to reduce hours, rather than having to make up the wages.

I really love working in restaurants. I love that I know that I can go anywhere and wait tables and make quick cash. I love the speed and the urgency of it. I love the camaraderie. I’ve left restaurant work many times and sworn that that was the last time – that I was tired of the lifestyle, or the stress, or the inconsistency, but people always joke about how “in this city you just get sucked back in”. If I step back and look at the bigger system – here’s what I see. I see a generation of young people who grew up in Maine. Some of those young people didn’t go to college, and others who did graduated with student loans that are substantial. They move to Portland because so many of the small towns we grew up in have few to no jobs available for young people to make money to pay off that debt. They get a service industry job, or more likely several. They make money in the summer, and hope they can make it through winter. And they rotate from restaurant to restaurant for years. People say that the restaurant industry in Portland is incestuous – that everyone’s worked with everyone else – but that’s because people keep switching jobs in search of the mythical balance of tips to hours to number of shifts to physical demand.

The people who make up the service industry in Portland are paid $3.75/hr and are dependent on tips. In my own experience, these are often the people who grew up here, who demonstrated a love for and commitment to stay in this state, who are in the bands or make the art for the creative economy in this city, who toggle multiple jobs to be able to work in non-profits or do social change work, who are tinkering with ideas but often don’t have the stability of income to be able to do something with them just yet.

I recognize how many times I’ve tried to “get out” of the restaurant industry, recognizing that there’s a lack of long-term opportunity and the not-so-subtle message that young people are dispensable to this economy, perpetuated in restaurants by staunchly denying workers a stable, consistent income throughout the year. This city spends a lot of time and energy right now trying to figure out how to encourage young people with money to move here from out of state. What if we took a fraction of that and considered what it would take to give those that are here the opportunity to stay – and reinvest their time, energy, talent, and creativity into this city?”