Among the findings of a new survey of all public mass shootings in the United States over the last 50 years: we account for one third of all such events in the world, mass murderers here use more weapons than elsewhere, and a nation's civilian firearm ownership rate is the strongest predictor of mass shootings. 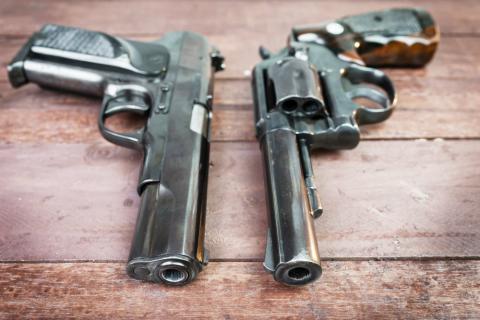 Those are some of the harrowing takeaways of a new study by Adam Lankford, a criminal justice professor at the University of Alabama. The study, “Mass Shooters, Firearms, and Social Strains: A Global Analysis of an Exceptionally American Problem,” offers the first qualitative analysis of all public mass shootings worldwide between 1966 and 2012. Lankford used data from the New York City Police Department’s 2012 active shooter report, the FBI’s 2014 active shooter report, and international sources. It omitted gang-related or drive-by shootings, as well as hostage-taking incidents, robberies, and shootings in domestic settings. A public mass shooting can be defined as a shooting that killed at least four victims, according to the FBI’s definition of mass murder.

“It’s a bigger problem today than it was a decade ago and it may be a bigger problem in the future,” Lankford told Newsweek. “There are a lot of questions that people have posed in the past that we didn’t have statistics on or quantitative answers for,” especially when it came to understanding the prevalence of mass shootings in America as compared with other countries.

Lankford examined data from 171 countries and concluded that the United States had the most public mass shooters in the world: 90. That’s five times as many as the Philippines, the next country on the list, which had 18. Of the remaining top five countries, Russia had 15, Yemen 11, and France 10.

“Given the fact that the United States has over 200 million more firearms in circulation than any other country, it’s not surprising that our public mass shooters would be more likely to arm themselves with multiple weapons than foreign offenders,” Lankford said. “I was surprised, however, that the average number of victims killed by each shooter was actually higher in other countries (8.81 victims) than it was in the United States (6.87 victims) because so many horrific attacks have occurred here.”

Perhaps unsurprisingly, Lankford also found a strong connection between America’s civilian firearm ownership rate and its number of mass shootings. According to the 2007 Small Arms Survey, United States, Yemen, Switzerland, Finland, and Serbia, rank among the top five countries for firearms owned per capita. They are all also ranked in the top 15 countries for public mass shooters per capita.

“My study provides empirical evidence, based on my quantitative assessment of 171 countries, that a nation’s civilian firearm ownership rate is the strongest predictor of its number of public mass shooters,” he concluded. “Until now, everyone was simply speculating about the relationship between firearms and public mass shootings. My study provides empirical evidence of a positive association between the two.”

Erica Hellerstein is an investigative reporter at ThinkProgress. Before joining the Center for American Progress, she worked as a freelance reporter, focusing on issues of gender, social justice, and reproductive health. She was also a reporter/researcher for Rape in the Fields, and worked for MADRE, an international women’s human rights organization. Her writing has been published in The Atlantic, The New Republic, Salon.com, Ms. Magazine, and more. Erica holds a B.A. in Creative Writing and Latin American Studies from the Johns Hopkins University and a Masters in Journalism from the University of California, Berkeley.