tv Review: Narcos is the Next Great Netflix Show

Led by executive producer and director José Padilha (2014's RoboCop), the series tracks the rise and fall of "King of Cocaine" Pablo Escobar, and the bloody drug war between the American Drug Enforcement Administration (DEA) and Colombia’s notorious Medellín Cartel. A well-crafted blend of The Wire and Goodfellas, Narcos takes an unflinching look at one of the War on Drugs’ single most violent conflicts. 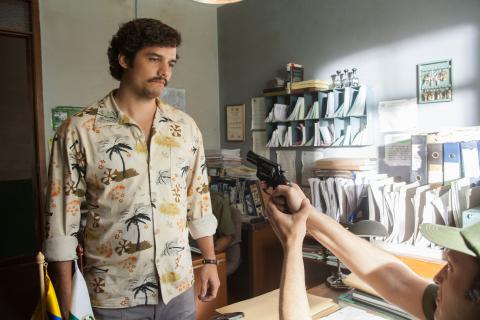 , (Netflix)
Television certainly isn’t hurting for crime dramas. The medium is positively glutted with shows that each, in their own way, bear a passing resemblance to the likes of Law and Order and CSI. But early last year, HBO’s True Detective created a renewed appetite for thoughtful and dark crime TV, and when this summer’s second season turned out to be a mind-bending bore, viewers’ thirst for a murky crime underworld was left unquenched.
Enter Narcos, Netflix’s latest original series — and the service's first big dramatic swing since the Wachowskis’ polarizing Sense8. Led by executive producer and director José Padilha (2014's RoboCop), the series tracks the rise and fall of "King of Cocaine" Pablo Escobar, and the bloody drug war between the American Drug Enforcement Administration (DEA) and Colombia’s notorious Medellín Cartel. A well-crafted blend of The Wire and Goodfellas, Narcos takes an unflinching look at one of the War on Drugs’ single most violent conflicts. It’s Netflix’s next great show, making the case that, as the streaming service aims to expand into 200 countries through next year, its international ambitions are worth the effort.
Our first tour guide into the world of Narcos is DEA agent Steve Murphy (Boyd Holbrook), who provides affably unhurried narration throughout the series. This is far from the first time we’ve heard this story (see: Traffic, Blow, and Killing Pablo, to name a few), but we’re quickly brought up to speed: in the 1970s, drugs poured onto American streets thanks to the expert smuggling efforts of the narcos, or Latin America’s elite drug traffickers. Cocaine, in particular, was a gold mine, quickly growing into a $50 billion a year industry. But that growth also killed thousands, whether it was through the policies of Chilean dictator Augusto Pinochet, the numerous disappearances at the hands of the cartels, or the wanton demand for the drug itself that killed users and smugglers alike.
MOURA TURNS ESCOBAR INTO A SOUTH AMERICAN TONY SOPRANO
Murphy is our window into this world, and early on in Narcos' 10-episode first season, it’s easy to assume that he’s the star of the show — the All-American good guy from Miami who steps into the drug war out of a sense of duty. But it doesn’t take long before the show begins subverting those assumptions, turning its gaze to the cartel and the series’ excellent Spanish-speaking cast. Game of Thrones alum Pedro Pascal plays Murphy’s partner Javier Peña, a Mexican DEA agent who was instrumental in bringing Escobar down. Elsewhere, Stephanie Sigman (soon to be the latest Bond girl in the upcoming Spectre) plays Valeria Velez, a character based on reporter Virginia Vallejo who struck up an affair with Escobar at the height of his influence. Much of the dialogue is subtitled Spanish, making Colombia and its people the focus of the story. It’s a refreshing move for Netflix, though it may put off old-school Miami Vice fans who expect their gangsters to speak in Spanish-accented English.
However, no performance surpasses Wagner Moura’s (Elysium) as Pablo Escobar himself. Moura, who last worked with Padilha on Brazilian megahit Elite Squad and its sequel, is both menacing and charismatic as the head of the Medellín cartel. During one early confrontation with Colombian authorities, he intimidates an official blocking his way by naming the officers under his thumb and the family members he’s clearly willing to kill. "Plata o plomo," ("Silver or lead") he intones, a phrase used by cartels to this day to enforce cooperation with bribes or blood. Moura is truly scary in the role, but also likable. He turns Escobar, an already outsized figure in Colombian history, into something of a South American Tony Soprano.
Moura’s Escobar might even be the kind of supervillain worth rooting for if not for our historical knowledge of how much killing he actually accomplished during his reign. And to its credit, Narcos never shies away from the fact that, despite its being a dramatized account of narcoterrorism in the 1980s with gratuitous sex scenes befitting any premium TV outing, untold thousands died during this period. The series makes frequent use of news footage to show the Medellín cartel’s victims, which included many prominent politicians and judges. It’s here that the show becomes an indictment of the War on Drugs itself: the United States is implicated in the rise of Escobar, having ignored cocaine’s presence in the country for years. It was the cartel’s growing economic might, not concern for what drugs were doing to its cities, that finally drew the US into the conflict. And the war that raged on for more than a decade did little to address the drug’s demand — money going into public health policy and drug education was negligible by comparison.
NETFLIX IS CLEARING A PATH FOR QUALITY SHOWS FOR INTERNATIONAL AUDIENCES
Narcos ends far before it's finished telling Escobar’s whole story, so if it's renewed, there’s still a great deal to look forward to. Escobar was a villain of mythic proportions. A self-made man from modest means, he built a massive drug empire while simultaneously nurturing dreams of becoming president of Colombia. He fashioned himself into a Robin Hood figure who earned the adulation and respect of the poor — even as he employed their children in his criminal activities. He’s as complex as he is compelling, so it’s no wonder why so much has been written and filmed about him since his death in 1993.
Narcos is excellent, the kind of crime drama Netflix can use to draw eyeballs away from HBO and the stalwarts running on CBS and NBC. It’s also proof that, where the service’s first ambitious effort in Marco Polo failed, new outings like Sense8 and Narcos are clearing a path for quality shows for international audiences. The ‘80s drug wars are certainly well-trod territory, but Padilha and crew have taken a familiar subject and breathed new life into it. Hope you don’t mind subtitles.