Majority of staff vote to join the News Guild, making Al Jazeera America the fifth digital newsroom to have launched a unionization effort this year 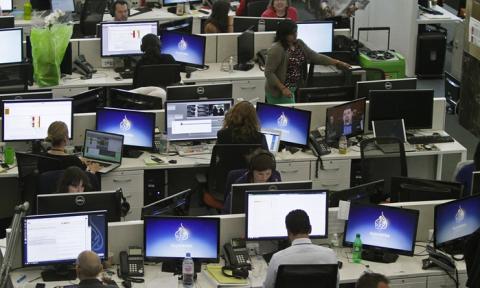 Al Jazeera has yet to say whether it will recognize the union. , Photograph: Bebeto Matthews
Staff members of the digital newsroom at Al Jazeera America said on Thursday that a majority have voted to unionize under the News Guild of New York, which is part of the Communications Workers of America union. Al Jazeera America is the fifth digital newsroom to have launched a unionization effort this year.
“We’re excited,” said Ned Resnikoff, a digital reporter at Al Jazeera America, in a statement. “We believe in Al Jazeera’s goal of delivering captivating, groundbreaking news, and the newsroom is really coming together to help the company further its journalistic mission. We welcome a constructive, amicable discussion with management to jointly address our concerns.”
“By organizing, we’ve had the chance to more fully realize the value and excellence of our newsroom – something we’re all committed to improving,” said Caroline Preston, digital editor at Al Jazeera America.
Al Jazeera has yet to say whether it will recognize the union.
“We are currently considering the request to voluntarily recognize the News Guild as the exclusive bargaining representative of the digital department employees,” said an Al Jazeera spokeswoman. “We have no further comment at this time.”
The announcement comes four months after Al Jazeera America replaced Ehab Al Shihabi, its interim CEO. Al Shibabi’s departure was announced a day after the New York Times published a story about “turmoil” and “culture of fear” in the newsroom, which included details about a $15m lawsuit and resignations of three employees. The lawsuit alleged that employees were forced to work in a hostile environment.
In their mission statement released on Thursday, employees who decided to join the efforts to unionize said that they believe Al Jazeera America can “do better” and called upon Al Jazeera’s leadership to “uphold its mission, not just to its audience but also to its employees”.
“As we enter our third year in the public eye, a troubling lack of transparency, inconsistent management and lack of clear redress have persisted at AJAM Digital,” the staff said. “Discrepancies in salaries, responsibilities and the way job performance is evaluated undermine our work and the harmony of our workplace.”
By forming a union, the staff hopes to collectively address these issues.
“We’re excited that a majority of workers in the digital newsroom at Al Jazeera America have chosen the News Guild as their community of choice as they create a workplace democracy to have their voices heard,” News Guild-CWA president Bernie Lunzer told the Guardian.
Al Jazeera America’s digital newsroom is the latest to unionize this summer.
In July, the Guardian US editorial staff also voted to unionize under the News Media Guild. Gawker, Salon and Vice have recently voted to unionize under Writers Guild of America.
On Tuesday, the News Guild announced that that its launching $500,000 campaign to organize other digital newsrooms.
That news might not go over well with Jonah Peretti, founder and chief executive of BuzzFeed. Earlier this month, he told his staff that unionization is appropriate for a factory setting but not right for a “global” and “new economy” company like BuzzFeed.